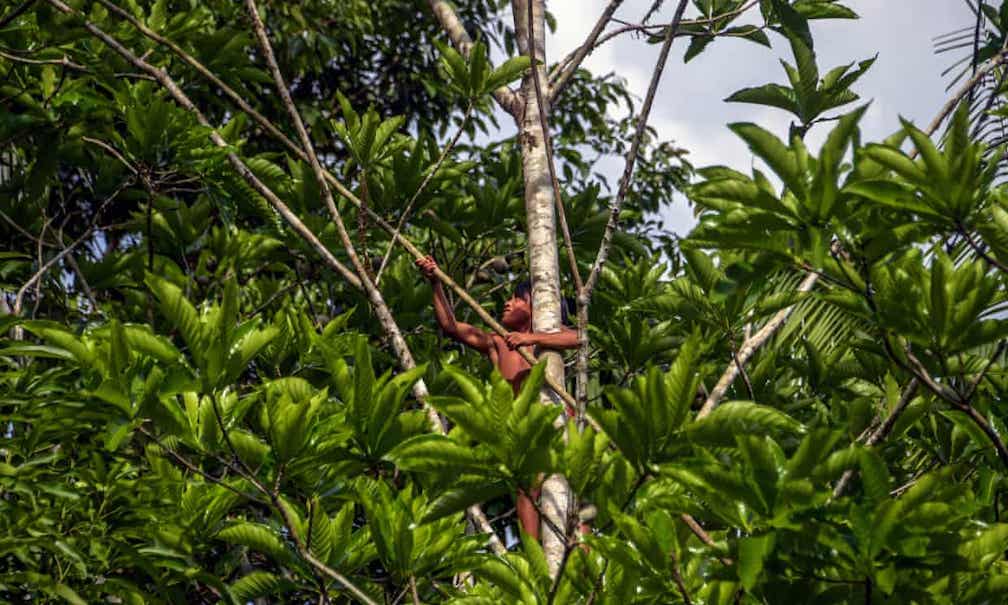 The embattled indigenous peoples of Latin America are by far the best guardians of the regions’ forests, according to a UN report, with deforestation rates up to 50% lower in their territories than elsewhere.

Protecting the vast forests is vital to tackling the climate crisis and plummeting populations of wildlife, and the report found that recognising the rights of indigenous and tribal peoples to their land is one of the most cost-effective actions. The report also calls for the peoples to be paid for the environmental benefits their stewardship provides, and for funding for the revitalisation of their ancestral knowledge of living in harmony with nature.

However, the demand for beef, soy, timber, oil and minerals means the threats to indigenous peoples and their forest homes are rising. Hundreds of community leaders have been killed because of disputes over land in recent years and the Covid-19 pandemic has added to the dangers forest peoples face.

Demands by indigenous peoples for their rights have become increasingly visible in recent years, the report said, but this has come with increasing persecution, racism, and assassinations. Supporting these peoples to protect the forests is particularly crucial now with scientists warning that the Amazon is nearing a tipping point where it switches from rainforest to savannah, risking the release of billions of tonnes of carbon into the atmosphere.

The report was produced by the UN Food and Agriculture Organization and the Fund for the Development of Indigenous Peoples of Latin America and the Caribbean (Filac), based on a review of more than 300 studies.This is my message to the western world – your civilisation is killing life on EarthNemonte NenquimoRead more

“Almost half of the intact forests in the Amazon basin are in indigenous territories and the evidence of their vital role in forest protection is crystal clear,” said the president of Filac, Myrna Cunningham, an indigenous woman from Nicaragua. “While the area of intact forest declined by only 5% between 2000 and 2016 in the region’s indigenous areas, in the non-indigenous areas it fell by 11%. This is why [indigenous peoples’] voice and vision should be taken into account in all global initiatives relating to climate change, biodiversity and forestry.”

“Indigenous peoples have a different concept of forests,” she said. “They are not seen as a place where you take out resources to increase your money – they are seen as a space where we live and that is given to us to protect for the next generations.”

Indigenous and tribal territories contain about a third of all the carbon stored in the forests of Latin America, said Julio Berdegué, the FAO’s Regional Representative: “These peoples are rich when it comes to culture, knowledge, and natural resources, but some of the poorest when it comes to incomes and access to services.” Supporting them would also help avoid new pandemics, he said, as these are most often the result of the destruction of nature.

“Even under siege from Covid-19 and a frightening rise in invasions from outsiders, we remain the ones who can stop the destruction of our forests and their biodiverse treasures,” said José Gregorio Diaz Mirabal, indigenous leader of an umbrella group, the Coordinator of the Indigenous Organizations of the Amazon Basin. He said the report’s evidence supports his call for climate funds to go directly to indigenous peoples and not governments vulnerable to corruption.

The report found the best forest protection was provided by peoples with collective legal titles to their lands. A 12-year study in the Bolivian, Brazilian, and Colombian Amazon found deforestation rates in such territories were only one half to one-third of those in other similar forests. Even though indigenous territories cover 28% of the Amazon Basin, they only generated 2.6% of the region’s carbon emissions, the report said.

Indigenous peoples occupy 400m hectares of land in the region, but there is no legal recognition of their property rights in a third of this area. “While the impact of guaranteeing tenure security is great, the cost is very low,” the report said, needing less than $45 per hectare for the mapping, negotiation and legal work required.

The report said it would cost many times more to prevent carbon emissions from fossil fuel burning using carbon capture and storage technology on power plants. The granting of land rights to indigenous people has increased over the last 20 years, Cunningham said, but has slowed down in recent years.

Paying indigenous and tribal communities for the environmental services of their territories has reduced deforestation in countries including Ecuador, Mexico, and Peru. Berdegué said such programmes could attract hundreds of millions of dollars per year from international sources.

The need for protection is urgent, the report said, with annual deforestation rates in Brazil’s indigenous territories rising from 10,000 hectares in 2017 to 43,000 hectares in 2019. In January, indigenous leaders urged the international criminal court to investigate Brazil’s president, Jair Bolsonaro, over his dismantling of environmental policies and violations of indigenous rights.

Elsewhere, the area of large intact forests in indigenous territories has fallen between 2000 and 2016, with 59% lost in Paraguay, 42% in Nicaragua, 30% in Honduras and 20% in Bolivia. Mining and oil concessions now overlay almost a quarter of the land in Amazon basin indigenous and tribal territories, the report said.