There’s a Global Plan to Conserve Nature. Indigenous People Could Lead the Way. 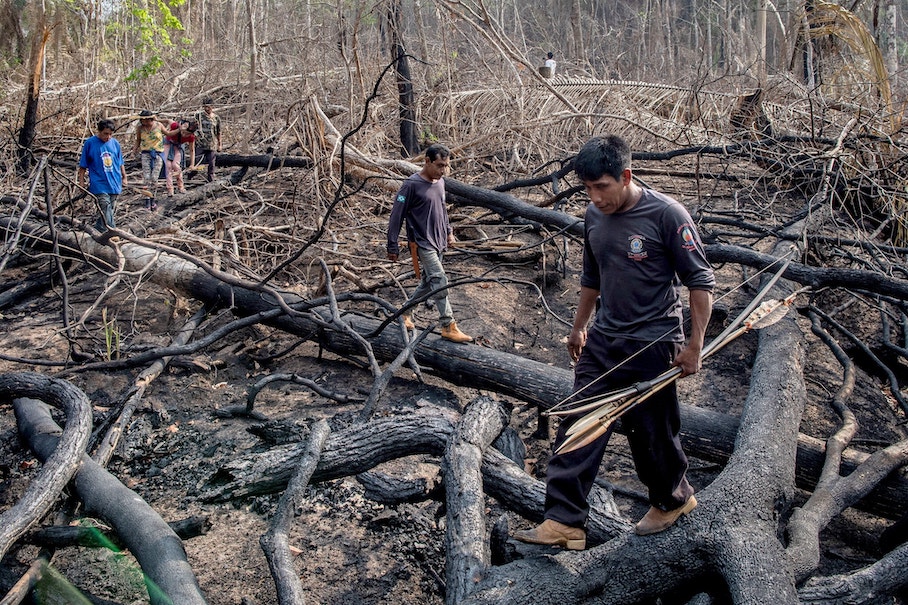 Dozens of countries are backing an effort that would protect 30 percent of Earth’s land and water. Native people, often among the most effective stewards of nature, have been disregarded, or worse, in the past.

With a million species at risk of extinction, dozens of countries are pushing to protect at least 30 percent of the planet’s land and water by 2030. Their goal is to hammer out a global agreement at negotiations to be held in China later this year, designed to keep intact natural areas like old growth forests and wetlands that nurture biodiversity, store carbon and filter water.

But many people who have been protecting nature successfully for generations won’t be deciding on the deal: Indigenous communities and others who have kept room for animals, plants and their habitats, not by fencing off nature, but by making a small living from it. The key to their success, research shows, is not extracting too much.

In the Brazilian Amazon, Indigenous people put their bodies on the line to protect native lands threatened by loggers and ranchers. In Canada, a First Nations group created a huge park to block mining. In Papua New Guinea, fishing communities have set up no-fishing zones. And in Guatemala, people living in a sprawling nature reserve are harvesting high-value timber in small amounts. In fact, some of those logs could end up as new bike lanes on the Brooklyn Bridge.

“If you’re going to save only the insects and the animals and not the Indigenous people, there’s a big contradiction,” said José Gregorio Díaz Mirabal, who leads an umbrella group, the Coordinator of Indigenous Organizations of the Amazon River Basin. “We’re one ecosystem.”

Nature is healthier on the more than quarter of the world’s lands that Indigenous people manage or own, according to several scientific studies. Indigenous-managed lands in Brazil, Canada and Australia have as much or more biodiversity than lands set aside for conservation by federal and other governments, researchers have found.

That is in stark contrast from the history of conservation, which has a troubled record of forcing people off their land. So, it is with a mixture of hope and worry that many Indigenous leaders view this latest global goal, known as 30×30, led by Britain, Costa Rica and France. Some want a higher target — more than 50 percent, according to Mr. Díaz Mirabal’s organization — while others fear that they may once again be pushed out in the name of conservation.

In the Brazilian Amazon, Awapu Uru Eu Wau Wau puts his life on the line to protect the riches of his ancestral lands: jaguars, endangered brown woolly monkeys, and natural springs from which 17 important rivers flow. His people, the Indigenous Uru Eu Wau Wau, have legal right to the land, but must constantly defend it from armed intruders.

Just beyond their 7,000-square mile territory, cattle ranchers and soy planters have razed much of the forest. Their land is among the last protected forests and savanna left in the Brazilian state of Rondônia. Illegal loggers often encroach.

So Mr. Uru Eu Wau Wau, who uses his community’s name as his surname, patrols the forest with poison-tipped arrows. Others in his community keep watch with drones, GPS equipment and video cameras. He prepares his daughter and son, 11 and 13 years old, to defend it in the years ahead.

“No one knows what’s going to happen to us, and I’m not going to live forever,” Mr. Uru Eu Wau Wau said. “We need to leave it to our children to get on with things.”

The risks are high. Mr. Uru Eu Wau Wau’s cousin, Ari Uru Eu Wau Wau, was murdered last April, part of a chilling pattern among land defenders across the Amazon. In 2019, the most recent year for which data is available, at least 46 were murdered across Latin America. Many were Indigenous.

The community’s efforts have outsized benefits for the world’s 7.75 billion people: The Amazon, which accounts for half the remaining tropical rainforest in the world, helps to regulate Earth’s climate and nurtures invaluable genetic diversity. Research shows Indigenous property rights are crucial to reducing illegal deforestation in the Amazon.

A Collapse of Nature

Nature is under assault because humans gobble up land to grow food, harvest timber and dig for minerals, while also overfishing the oceans. Making matters worse, the combustion of fossil fuels is warming up the planet and making it harder for animals and plants to survive.

At fault, some scholars say, are the same historical forces that have extracted natural resources for hundreds of years, at the expense of Indigenous people. “What we’re seeing now with the biodiversity collapse and with climate change is the final stage of the effects of colonialism,” said Paige West, an anthropologist at Columbia University.

There is now broad recognition that reversing the loss of biodiversity is urgent not only for food security and a stable climate, it’s also critical to reducing the risk of new diseases spilling over from wild animals, like the coronavirus.

Enter 30×30. The goal to protect at least 30 percent of the Earth’s land and water, long pushed by conservationists, has been taken up by a coalition of countries. It will be part of diplomatic negotiations to be held in Kunming, China, this fall, under the United Nations Convention on Biodiversity. The United States is the only country, apart from the Vatican, that has not joined the convention, though President Biden has ordered up a plan to protect 30 percent of American waters and lands.

Indigenous communities are not recognized as parties to the international agreement. They can come as observers to the talks, but can’t vote on the outcome. Practically though, success is impossible without their support.

They already protect much of the world’s land and water, as David Cooper, deputy executive secretary of the United Nations agency for biodiversity, pointed out. “People live in these places,” he said. “They need to be engaged and their rights respected.”

A coalition of Indigenous groups and local communities has called for the agreement to protect at least half of the planet. Scientific research backs them up, finding that saving a third of the planet is simply not enough to preserve biodiversity and to store enough planet-warming carbon dioxide to slow down global warming.

Creating a New Kind of Park

A half century ago, where boreal forest meets tundra in Canada’s Northwest Territories, the Łutsël K’é’ Dene, one of the area’s Indigenous groups, opposed Canada’s efforts to set up a national park in and around its homeland.

“At that time, Canada’s national parks policies were very negative to Indigenous people’s ways of life,” said Steven Nitah, a former tribal chief. “They used to create national parks — fortress parks, I call it — and they kicked people out.”

But in the 1990s, the Łutsël K’é’ Dene faced a new threat: Diamonds were found nearby. They feared their lands would be gutted by mining companies. So they went back to the Canadian government to revisit the idea of a national park — one that enshrined their rights to manage the land, hunt and fish.

“To protect that heart of our homeland from industrial activities, this is what we used,” said Mr. Nitah, who served as his people’s chief negotiator with the Canadian government.

The park opened in 2019. Its name, Thaidene Nëné, means “Land of the Ancestors.”

Collaboration among conservationists, Indigenous nations and governments holds a key to protecting biodiversity, according to research.

Making a Living From Nature

Researchers have found that biodiversity protection often works best when local communities have a stake.

On islands in Papua New Guinea, for example, where fish is a staple, stocks had dwindled in recent decades. Fishers ventured farther from shore and spent more time at sea, but came back with smaller catches. So they partnered with local and international nonprofit groups to try something new. They changed their nets to let smaller fish escape. They reduced their use of a poison that brings fish to the surface. Most critically, they closed some waters to fishing altogether.

Meksen Darius, the head of one of the clans using these measures, said people were open to the idea because they hoped it would improve their livelihoods.

“The volume, the kinds of species of fish and other marine life, they’ve multiplied,” Mr. Darius, a retired lawyer, said.

Recent research from around the world shows that marine protected areas increase fish stocks, ultimately allowing fishing communities to catch more fish on the edges of the reserves.

To Iliana Monterroso, an environmental scientist at the Center for International Forestry Research in Lima, Peru, what matters is that people who live in areas of high biodiversity have a right to manage those areas. She pointed to the example of the Mayan Biosphere Reserve, a territory of two million hectares in Guatemala, where local communities have managed the forest for 30 years.

Under temporary contracts with the national government, they began harvesting limited quantities of timber and allspice, selling ornamental palms and running tourism agencies. They had an investment to protect. “The forest became the source of livelihood,” Dr. Monterroso said. “They were able to gain tangible benefits.”

Jaguars, spider monkeys and 535 species of butterflies thrive there. So does the white-lipped peccary, a shy pig that tends to disappear quickly when there’s hunting pressure. Community-managed forests have fewer forest fires, and there is almost zero rate of deforestation, according to researchers.

Erwin Maas is among the hundreds of Guatemalans who live there, too. He and his neighbors run a community-owned business in the village of Uaxactún. Mahogany is plentiful, but they can take only so much. Often, it’s one or two trees per hectare per year, Mr. Maas said. Seed-producing trees are left alone.

“Our goal is to sustain ourselves with a small amount and always take care of the forest,” he said.