Posted on July 1, 2022 by Viktor Sulyandziga 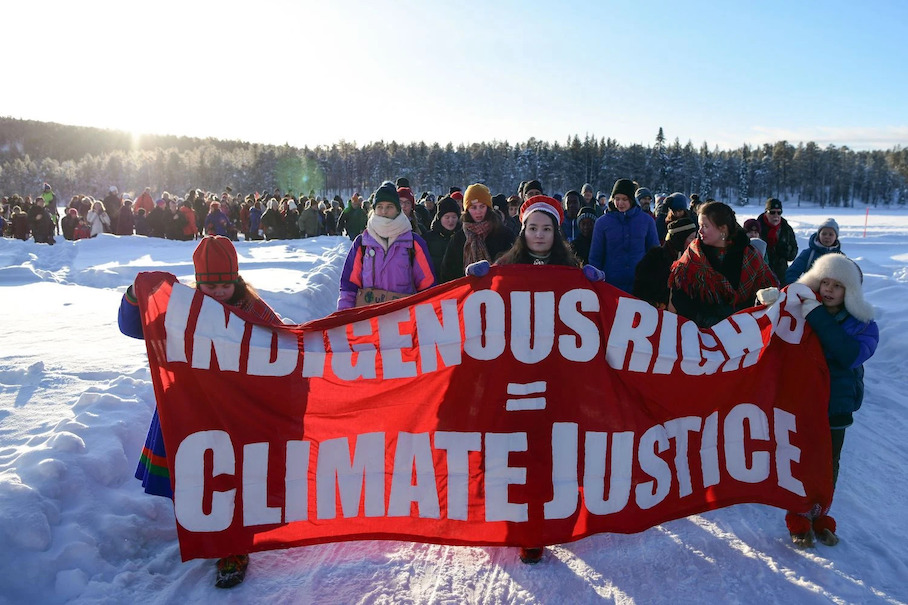 It has driven a wedge between Sámi in Russia and those in Nordic countries.

The Sámi are no strangers to division. The Indigenous people of Arctic Europe, they once freely moved across the northernmost lands of the continent, fishing its coasts, hunting in its forests, and herding reindeer over its tundra. Only in recent centuries was Sápmi, the Sámi’s traditional territory, first divided among the colonial borders of Russia, Finland, Sweden, and Norway; filled with settlers; and sold off in pieces to logging and mining corporations.

Now, Russia’s invasion of Ukraine has split the Sámi again. Some leaders from the small Russian Sámi community have openly aligned with the government of Russian President Vladimir Putin, driving a schism with Sámi in Sweden, Finland, and Norway.

In April, the transnational Saami Council, a body that brings together Sámi leadership from all parts of Sápmi, made the decision to suspend formal relations with Russia’s two internationally recognized Sámi organizations—the Kola Sámi Association and the Association of Sámi in Murmansk Oblast (OOSMO)—after the council’s Russian vice president, Ivan Matrekhin, was pictured playing a guitar scrawled with a “Z,” a symbol used by supporters of Russia’s war. (Saami is an alternative spelling of Sámi.)

Added to the internet blockades, sanctions, and political repression to which all Russians are subject, the suspension means Russian Sámi have now been all but cut off from the wider world—just when activists and advocates say Sámi solidarity is needed most to counter the accelerating destruction of their traditional territory.

The Saami Council’s decision was preceded by months of delicate diplomacy around the question of Russian Sámi support for the war in Ukraine. In late February, the Russian members of the council issued a statement acknowledging the “extremely unstable, one might say, dangerous situation” they faced inside Russia due to the country’s increasing international isolation. “Now, more than ever, the Sámi people in Russia need international support,” the statement read.

But their position was increasingly untenable. In early March, the Kola Sámi Association signed on to a statement by the Russian Association of Indigenous Peoples of the North, or Raipon, voicing support for Russian “peacemaking” in Ukraine, as the invasion is often euphemized domestically. When the statement was condemned by other Indigenous advocates, including some Russian Sámi, Raipon accused them of “stooping to open insults” in pursuit of “mercantile interests.”

The growing divide is characterized more by sadness than by anger. Sámi advocates on both sides feel that decades of work building connections between Russian Sámi and the West have been undone overnight.

“I’ve been spending half my life trying to strengthen the ties between the Nordic side and the Russian side of Sápmi,” said Christina Henriksen, the Norway-based president of the Saami Council, which has included delegates from the two Russian Sámi organizations for the past 30 years.

“Everything we have tried to build up was just shattered after the invasion,” she added. “What was the purpose of all this if it was all so easy to tear down?”

“It marks a shift in Sámi history,” added Mikkel Berg-Nordlie, a historian of the Sámi people at Oslo Metropolitan University who is also Sámi himself. After decades of Sámi cross-border outreach and collaboration, the Iron Curtain has descended once again.

Though most of the world’s 80,000 Sámi live in Norway, Sweden, or Finland, Russia has been home to a recognized Sámi community since at least the 13th century, when they entered the tax records of Novgorod. Today, they total about 1,500 people.

Archaeological evidence suggests the Kola Peninsula, the broad tail of land where Russia meets Scandinavia, has been a homeland for Sámi people for thousands of years. But as European settlers colonized the area, the eastern Sámi of Finland and Russia began to diverge culturally and linguistically from those to the west, in what became Sweden and Norway.

That divergence accelerated with the 1920 treaty between a newly independent Finland and the Soviet Union, which established the first hard border within Sápmi, as well as over the course of various wars fought between Russia, Sweden, and Finland during the early 20th century. But it was the experience of living under the Soviet Union that Sámi experts say defined Russian Sámi differences today.

The Soviet Union initially embraced a policy of multinationalism that celebrated Indigenous cultures, if not their traditional politics or economies. But beginning under Soviet leader Joseph Stalin in 1922, Sámi were increasingly subject to relocation, state terrorism, and the forced collectivization of their lands and reindeer herds. The Kola Peninsula was both strategically important and rich in mineral deposits, and Sámi families were stripped of the tools they had used to survive and live an independent, semi-nomadic life and moved to inland settlements, where reindeer herding and other traditional activities were turned into a state enterprise. “Many Sámi were in essence kicked out of their own industry,” Berg-Nordlie said.

The Soviet Union also forcibly relocated Sámi to facilitate military and industrial developments, in particular to create a border zone with Finland. The Skolt Sámi people, who occupied the border zone, were divided between the two countries, with many relocated to Finland and cut off from family networks that remained in the Soviet Union. There, Sámi settlements were depopulated, and their residents were concentrated in ill-prepared tenements in the city of Lovozero, which remains home to many Russian Sámi today.

Throughout this period, Sámi were viewed with suspicion by Soviet authorities—as an international people with ties to Western Europe. In what is known as the Great Terror of 1938, intelligence officials manufactured a conspiracy theory that Sámi were working to create an independent homeland in the Kola Peninsula, accusing Sámi leaders of planning to ride to Moscow on reindeer and execute the Politburo with hunting rifles. The fabrication was used as a pretense to arrest and execute dozens of community leaders.

Meanwhile, Sámi in Finland, Norway, and Sweden collaborated across borders in the Saami Council. They also won legislative powers and certain rights guarantees from national governments by forming Sámi parliaments in each country. In Finland, this parliament was even written into the constitution and empowered to represent Finnish Sámi internationally.

After the fall of the Soviet Union in the 1990s, Sámi leaders began pushing for similar rights and bodies in Russia as the country integrated with the Western world. Sámi leaders on both sides also worked to integrate Russian Sámi into the broader international Indigenous community. Russian Sámi were welcomed into the Saami Council for the first time and participated in international venues such as the Arctic Council.

Russian Sámi groups “adopt the same language, the same orientation toward Indigenous rights” as those in the West, Berg-Nordlie said. “And even for a time, the Russian Federation became quite progressive with regards to rights—at least on paper.”

Cross-border collaborations were critical to addressing the issues most important to Sámi. Nordic organizations could pour money and resources into Russia to help revitalize the country’s three critically endangered Sámi languages. Arctic monitoring and cleanup programs run by the Arctic Council helped document the effects of relentless industrialization and climate change across the Sámi homelands—until it suspended its activity just a week after Russia’s invasion of Ukraine.

Today, all of that seems lost. Environmental data collection is on hold, and cultural collaborations are at a standstill. The push for Sámi self-determination within Russia has been set back by internal repression, and communication with the Russian side of Sápmi is harder now than at any time since the fall of the Soviet Union.

“An employee of Snowchange has already been arrested [in Russia],” she said. “For the first time in my life, I had to really start thinking through this carefully. … I know that I can always get out, but am I doing more harm for the people that are staying there?”

Russian Sámi are increasingly worried about being isolated from the rest of Sápmi. “We are one people, divided by the borders of different countries,” Aleksandr Slupachik, the leader of OOSMO, one of the two Russian Sámi organizations, wrote in an email. “In order for the development of our people to be harmonious and full, all Sámi communities must be full participants in all international processes.”

“The difficulty is that now there are no official events where we could meet and discuss our problems … [and] now there are problems with going abroad,” he wrote.

Within Russia, resurgent nationalism and increasing international isolation are only worsening a campaign of internal repression against political activists that has been festering for a decade. In 2012, in response to protests against Putin’s rule, nongovernmental organizations that accepted foreign funding were required to register as “foreign agents” and were subject to harassment by security services. Indigenous activists were among the first targets.

Just as Russia was amassing troops on the Ukrainian border, Russian security services detained Andrei Danilov, a Skolt Sámi activist, for five days in August 2021 after he refused to undergo a search without witnesses. He said the experience left him feeling that had “two options: to leave Russia, or death in Russia.” As he went into exile in Norway, the invasion of Ukraine began.

“Before the war, the climate for the Indigenous peoples was very unfavorable,” he wrote in an email. “With the outbreak of the war, Russia’s course was set to violate international norms, including norms regarding Indigenous peoples.”

All this comes as the issues facing Russian Sámi grow more urgent. Russian oil and mining giants are devastating Sámi homelands with pollution from open-pit mines and pipelines, all while international environmental monitoring is on hold. Finland’s pending membership of NATO, meanwhile, is likely to increase the troop buildup on the Kola Peninsula. “There are concerns about how the geopolitical situation has changed,” said Tuomas Aslak Juuso, the president of Finland’s Sámediggi, its national Sámi parliament.

The economic impacts of Western sanctions on Russia are also hitting remote Indigenous communities particularly hard. “We are part of the Russian economy, and when the economy is going down, and the prices are getting high, of course it [negatively] impacts the remote areas,” said Rodion Sulyandziga, the director of Russia’s Center for Support of Indigenous Peoples of the North, an NGO.

Throughout the war, Russian Sámi have had to reckon with some of their own community leaders offering full support to the same state and state-aligned companies that are devastating their communities. Feodoroff, the Sámi activist from Finland, said it’s easy to judge these leaders for their position. But “people are really pushed to use their public voice for pro-Putinism,” she said. Berg-Nordlie, the historian, agreed. “Right now, we’re back to the point where it can’t be expected that people belonging to ethnic minorities in Russia express open dissent,” he said.

For many Sámi, that means putting advocacy on hold for now. But those who know the Russian Sámi have no doubt they will one day join with the rest of Sápmi again. “[Russian] Sámi people have learned to manage with these kinds of regimes,” Juuso said. “They’ve been able to live and stay as Sámi. So I think the solutions are coming from inside themselves.”

The Russian Sámi, Feodoroff said, “are people who have tried to survive through such regimes and eras, and such catastrophes, that our side in the West do not understand.”

“And thus, compassion, and a minimum commitment that we shall not abandon them, should be there,” she said. “We will not abandon those ordinary people who are just trying to survive.”