Nornickel’s ruthless business model and the responsibility of German corporations 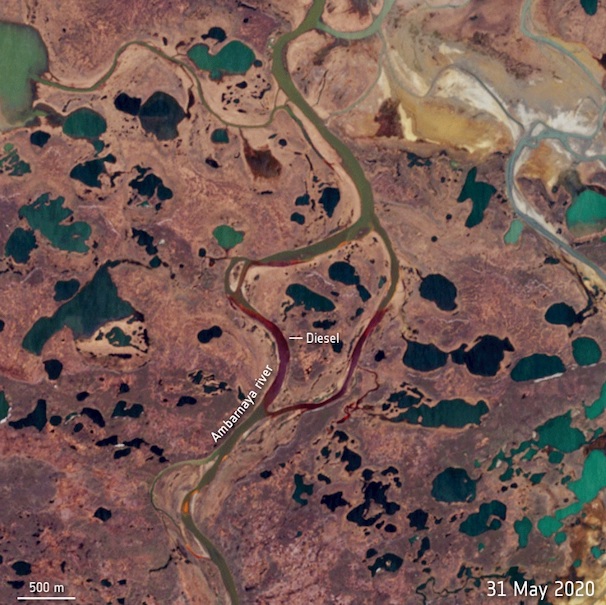 After more than 21,000 tons of diesel leaked from a power plant tank in May 2020, causing the largest oil spill in the Russian Arctic to date, the company responsible, Nornickel (Norilsk Nickel), had to pay Russia’s highest fine to date.

In the satellite image, diesel oil spilled in the Ambarnaya River on May 31, 2020 is easily recognizable by its red color.

But this is still a long way from repairing the damage, let alone addressing the causes. In addition to the sensitive ecosystem, it is above all the indigenous groups in northern Russia that have to suffer the consequences of Nornickel’s ruthless business model.

“It has been a year since Nornickel discharged diesel fuel into the rivers and lakes of the Taimyr Peninsula. The communities have been without fish since then, and they have not received any compensation. They do not know how they will live. As before, Nornickel refuses to talk to the affected indigenous communities.”

German companies have known for years about Nornickel’s violations of international social and environmental standards. But the company continues to get loans from Commerzbank and Deutsche Bank without any problems. BASF is trying to improve standards, as nickel is particularly important for electromobility – so far without serious success.

“What did Nornickel leave behind on the Kola Peninsula? Our territory was destroyed. But what does the company do? Nothing. It pretends to cooperate with us, but concludes secret contracts without consultation. We have no way to revive our traditional ways of life. Nornickel does not respect the rights of indigenous peoples.”

DWS, the asset management company belonging to Deutsche Bank, on the other hand, has drawn the first consequences, as the identified grievances have not been remedied. DWS has removed Nornickel from a large proportion of its funds. At shareholder meetings, but also in our direct dialogs, we will continue to call for concrete steps to increase the pressure on Nornickel.

“It is very important for German companies building the green economy today to comply with international standards for indigenous peoples’ rights when working with their suppliers. It cannot be that some countries and communities have a clean living environment while indigenous peoples whose lands are mined for the green economy are left amidst devastated lands and ‘moonscapes’.”