Urgent call to investigate the attack against Nasa indigenous leader and senator Aida Quilcué and to guarantee protection for indigenous peoples and leaders.

Posted on November 1, 2022 by Viktor Sulyandziga 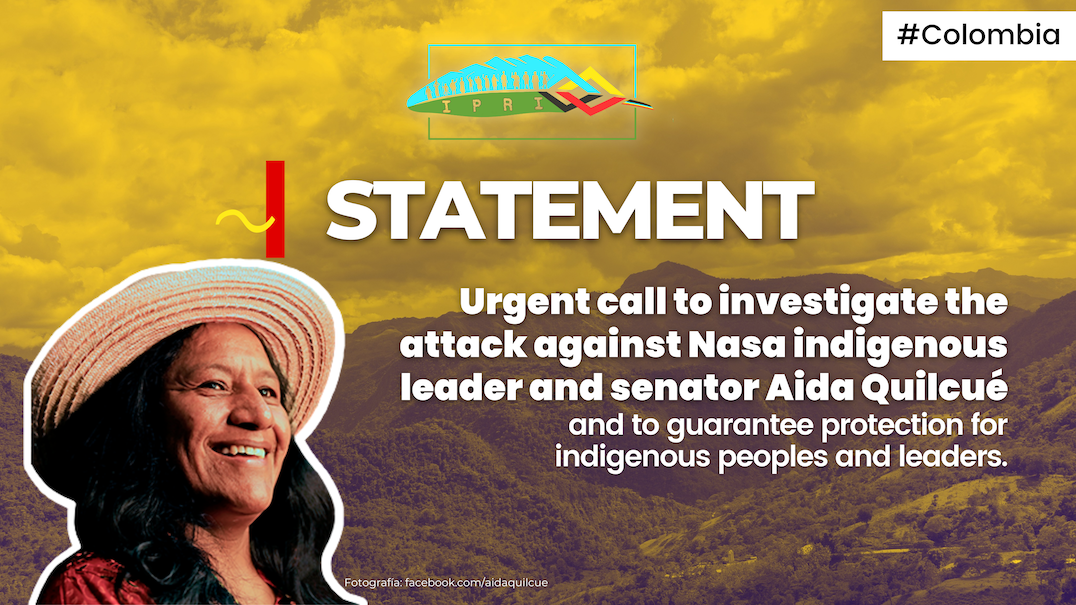 The Indigenous Peoples Rights International (IPRI), a global initiative for the protection of the rights of indigenous peoples and against criminalization, strongly condemns the attack against the senator and Nasa indigenous leader Aida Quilcué and expresses our deep concern about the continued attacks against indigenous peoples in Colombia.

On October 29, 2022, in the sector of Guadualejo – Puerto Valencia, Tierradentro – Cauca, Colombia, our fellow defender Aida Quilcué suffered an attack against the vehicle in which she was traveling that put her physical and psychological integrity and that of her companions at high risk. This incident occurred in the same week in which the indigenous leader Yermy Chocué Camayo of the Chimborazo, Morales reservation, also in Cauca, was murdered.

Mrs. Aida Quilcué is an indigenous woman of the Nasa people with a 30-year trajectory in the defense of human and territorial rights of the peoples, she has been a key leader in the peace-building processes in the region and the vindication of the right to a dignified life for indigenous peoples. The attack against her constitutes an act of terror and intimidation for the indigenous peoples of Colombia and demonstrates the high risk faced by indigenous leaders, who play key roles in the physical and cultural survival of their communities.

Regrettably, these events occur at crucial moments in Colombia’s political life when its peoples have struggled tirelessly to find peace. According to INDEPAZ, during the year 2022, 32 indigenous defenders have been killed in a context of threats, attacks, and stigmatization.

IPRI joins the voices of rejection expressed by indigenous organizations and other institutions for this violent act and we urge the Colombian State and the judicial bodies of the State to:

We express our unconditional solidarity with our sister Aida Quilcué and with all leaders at risk. We call on national and international human rights organizations to remain vigilant to the struggle of indigenous peoples in Colombia. We support the initiatives aimed at sowing integral peace in the indigenous territories, which will only be possible if truth, justice, and integral reparation are guaranteed.

Deputy Director for Latin America and the Caribbean of Indigenous Peoples Rights International.