Posted on August 1, 2022 by Viktor Sulyandziga 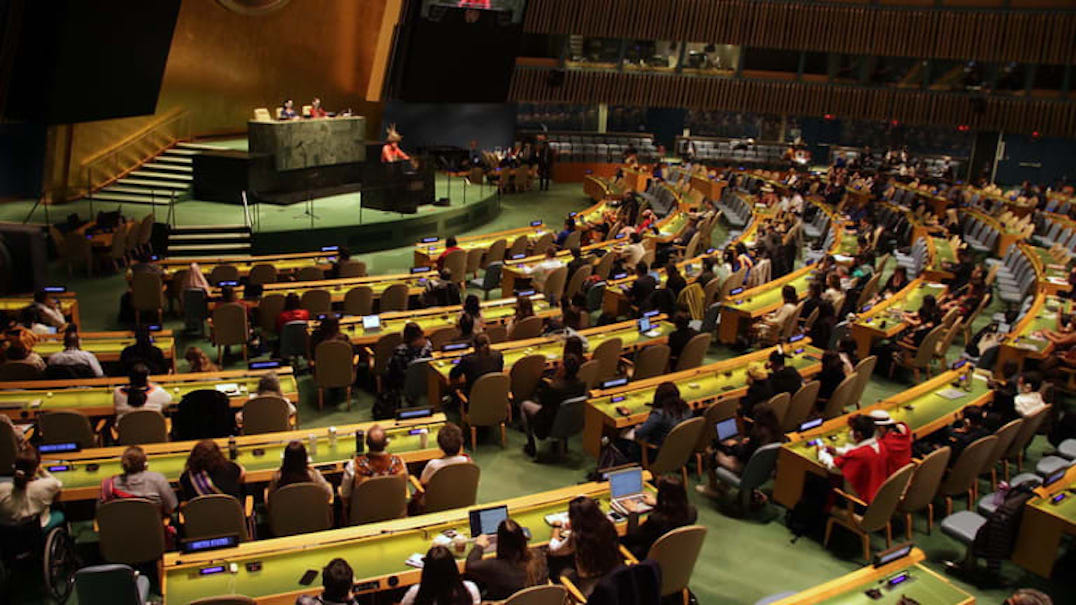 The Escazú Agreement establishes the relationship between human rights and environmental protections. The United Nations Permanent Forum on Indigenous Issues urged its member states to adopt it.

The first climate agreement focusing on Indigenous perspectives continues to gain international support after the United Nations Permanent Forum on Indigenous Issues urged its member states to adopt the agreement in its final report which was released last month.

Known as the Escazú Agreement, the plan was a recurring topic throughout the permanent forum’s 21st session, and its side events, in April and May in New York City, in which government, tribal and community leaders discussed vital issues affecting Indigenous populations throughout the world.

“The Escazú Agreement is the first instrument that includes provisions on the protection of human rights defenders in environmental matters,” the report states.

The permanent form’s annual session is considered the world’s largest gathering of Indigenous leaders and the final report provides expert advice and recommendations on Indigenous issues to the UN system through the economic and social council.

In 2000, the United Nations Economic and Social Council established the permanent forum to discuss Indigenous issues relating to economic and social development, culture, the environment, education, health and human rights.

The council is then expected to make recommendations to the UN General Assembly, member states and other agencies. It’s considered a vital instrument for disseminating information about Indigenous people on an international level.

The permanent forum’s newly elected Chair Darío José Mejía Montalvo, Zenú, talked about the agreement during his opening remarks on the first day of the session.

“Recall that in combating climate change, Indigenous people are mainstays,” Montalvo said. “This is not a fashion, not motivated by needs and trends on social networks, it’s our way of life. We value and respect all efforts to protect the planet.

“Our existence dates from before the existence of borders,” he said.

He went on to explain the significance of the Escazú Agreement, then urged those states that have not yet subscribed to the agreement to adopt it and for those that have to implement it faster.

According to environmental defenders like Patricia Gualinga the most effective way to protect rainforests, like the Amazon, is by protecting the rights and sovereignty of Indigenous people and the Escazú Agreement could potentially be a powerful mechanism in doing that.

Gualinga is a Kichwa leader from Sarayaku, Ecuador and a spokeswoman for Amazonian Women – a coalition of women environmental and land defenders, better known as Mujeres Amazónicas Defensoras de la Selva.

“It’s hard to describe the smell of such pure air when you’re in the rainforest,” she told Mongabay News in May. “When you go into these sacred forests, you feel so much closer to the forces of creation.” In these spaces, beyond encountering an incalculable natural wealth, one can connect to the basic principles of energy and equilibrium, she told the news outlet.

It’s formally known as the Regional Agreement on Access to Information, Public Participation and Justice in Environmental Matters in Latin America and the Caribbean. It was signed in 2018 in Escazú, Costa Rica after years of planning, preparation and negotiations between Latin and Caribbean countries. Currently of the 24 countries that have signed the agreement 12 have ratified it into law.

One of the agreement’s pillars starts with ensuring the timely generation and dissemination of environmental information to impacted communities.

“Such reports shall be drafted in an easily comprehensible manner and accessible to the public in different formats and disseminated through appropriate means, taking into account cultural realities,” the agreement states. “Each Party may invite the public to make contributions to these reports.”

The Escazù Agreement entered into force in April 2021 and a year later, as outlined, the first Conference of the Parties took place. The conference established public participation during the three days of the event, which began with tense debates on the matter.

“Eliminating the participation of the public is removing the very spirit of this agreement,” said Calapucha, a member of the Coordinator of Indigenous Organizations of the Amazon River Basin, during that first meeting.

The moment was sparked by several tense minutes during the negotiations when the Bolivian delegation presented a project that would eliminate the inclusion of the public in the board of directors, according to Mongabay News. Another topic was the creation of a task force specifically focused on monitoring the situation surrounding environmental defenders, according to the news outlet.

That first Conference of Parties of Escazú – which was in Santiago, Chile – marked the first step toward effective implementation of the agreement but during one side event, hosted by the Women’s Earth and Climate Action Network, women voiced their lingering concerns.

Gualinga, the Amazonian Women spokeswoman, was one of eight featured speakers advocating for the agreement during the Escazú conference side event, “Implementing the Escazú Agreement: Opportunities and Implications for Women Land Defenders and Human Rights Advocates.”

She’s the daughter of a traditional healer who testified in front of the Inter-American Court of Human Rights to protect their ancestral territory. She knows, first hand, when Indigenous people mobilize they have the power to halt extractive projects in their tracks but they risk arrest or even death.

“Without proper implementation there won’t be justice” Gualinga said about the Escazú Agreement, adding that Indigenous women can speak up and lead forward to a more sustainable future. Many voiced concerns about the threats experienced by female land defenders, saying they are not unusual and adding that there’s a “lack of political will” on national and international level to protect people.

“We need to use this lever as much as we can to protect defenders of land and women who are putting their bodies on the line to protect biodiverse areas,” said Osprey Orielle Lake, executive director of WECAN, the organization that hosted the virtual side event. Lake pointed to the entrenched colonial and patriarchal systems in place that will make it difficult for this “unique and transformative agreement” to provide a promising path forward.

According to a 2021 report, the previous year had been the worst year on record for killings of environmental defenders, with more than half of the attacks taking place in only three countries: Colombia, Mexico and Philippines.

The report was published by Global Witness, an international nonprofit organization that has been investigating environmental and human rights abuses and linking natural resource extraction with widespread attacks and killings. However, more recent data shows a dramatic increase in assassinations.

So far in 2022, 99 defenders have been killed as of July 4, according to the Institute of Studies for Development and Peace which tracks murders in Colombia. Roughly a third of those killed were Indigenous or Afro-descent.

Many Indigenous communities are attacked and displaced, forced to leave their territories due to legal and illegal extractive projects, like mining and logging, as well as narco-paramilitaries. Experts say the increased violence is spilling into neighboring rural communities.

The impacts of the agreement reach beyond Indigenous communities. It’s also gained support from multilateral banking institutions and the Organization for Economic Cooperation and Development, which recognize the importance of the agreement as a tool to generate certainty and stability in investments. Leaders are hopeful that, with support from the permanent forum, the Escazú Agreement can continue to generate support and proper implementation.