Indigenous activists of Russia denounced as “traitors to the people”

Posted on August 8, 2022 by Viktor Sulyandziga 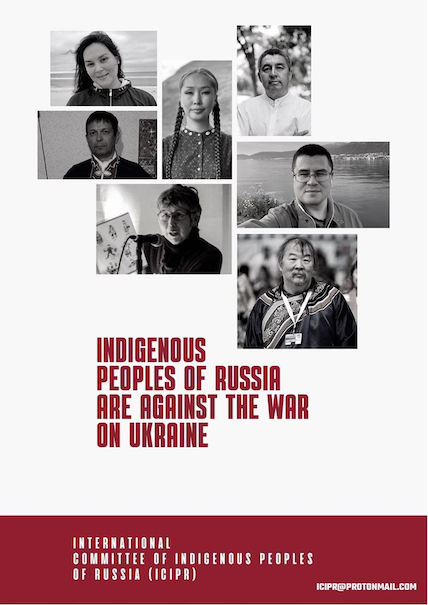 The Kremlin demands unconditional loyalty; criticism is severely punished. The indigenous peoples of the North also had to experience this themselves. Official indigenous organizations support the war against Ukraine, and some officials even enthusiastically celebrate it. The damage is enormous, the credibility of these organizations has been undermined. International organizations, both within the UN and within the Arctic cooperation, must immediately stop collaborating with Putin’s claqueurs.

But there are also courageous exceptions of those who fight back, condemning the crime of Russia’s war of aggression and openly criticizing the corrupt indigenous associations loyal to Putin. By doing so, they expose themselves to the wrath and vengeance of the Kremlin, as well as to attacks from their compatriots. They, allegedly, are traitors and defilers.

A traitorous example of hypocritical taunts: “Traitors to their peoples are always welcome in NATO, and now that it wants to block Russia’s Arctic, the Alliance is creating an organization consisting of traitors to their native peoples. But there are only seven such people in the whole world. Instead of a pack of wolves, only seven little mutts could be fed…” This refers to the founding members of the International Committee of Indigenous Peoples of Russia. Such insults can be found on the Internet.

Critical organizations in Russia are liquidated, entities and individuals are declared foreign agents, and the most active representatives are forced abroad.

The Kremlin wants to avoid being confronted with representatives of Russia’s indigenous peoples on the international stage and in international organizations in view of its atrocities. The brothers Pavel and Rodion Sulyandziga are of particular annoyance to those in power. They resorted to the United Nations Economic and Social Council (UN ECOSOC) to denounce Russia’s aggressive policies in general and the oppression of indigenous peoples in particular.

The loyalty of indigenous organizations and individuals is actively promoted with incentives, while people like the Sulyandziga brothers are being prosecuted.

However, courageous representatives (some of them forced into exile) do not sink to the level of attacks. Recently, a number of named has appealed to international organizations and issued warnings about Putin’s henchmen among indigenous organizations:

“On February 24, 2022, the Russian Federation launched a full-scale invasion of Ukraine. Thousands of civilians were killed in rocket attacks on Ukrainian settlements –  representatives of various ethnic groups and confessions, indigenous peoples, including hundreds of children.

Organizations of indigenous peoples of Russia, such as the Association of Indigenous Peoples of the North, Siberia and the Far East (RAIPON), the interregional public organization Information and Educational Network of Indigenous Peoples “Lyoravetlian” and the Association of Finno-Ugric Peoples of the Russian Federation (AFUN RF) officially supported the criminal actions President Putin to unleash a war against Ukraine.

We appeal to the United Nations, in particular to the President of ECOSOC, with a call to deprive the organizations that supported Russia’s aggression against Ukraine of their consultative status in the UN ECOSOC, and also prevent the appointment of representatives of these organizations to UN subordinate bodies, such as the Permanent Forum on Indigenous Issues and the Expert Mechanism on the Rights of Indigenous Peoples.

We appeal to all international organizations that proclaim human life and freedom as the highest value not to allow participation in their work of representatives of organizations of indigenous peoples of Russia that support Russia’s military aggression against Ukraine.

We appeal to the international community with a request to establish an independent commission to study and prepare a report on the impact of the armed aggression of the Russian Federation against Ukraine on the indigenous peoples of Russia and Ukraine.“