Dmitry Berezhkov: “How does the militarization of Russia’s internal politics, social life and economy affect indigenous peoples’ development in Russia?” 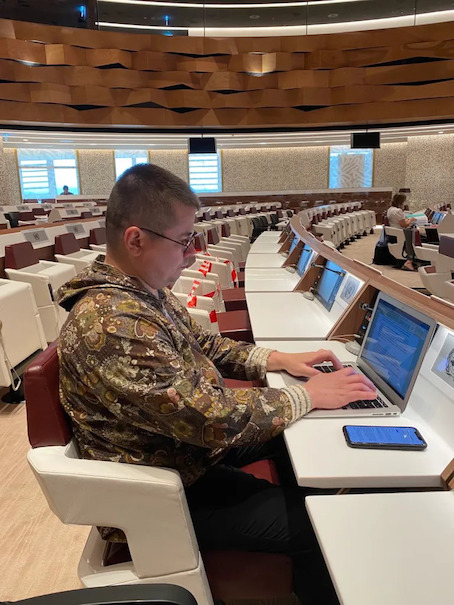 15 Session of the Expert Mechanism on the rights of indigenous peoples. 4 July 2022, Geneva

EMRIP Side-Event: The influence of the aggression of the Russian Federation in Ukraine on indigenous peoples of Russia – https://indigenous-russia.com/archives/22391

Presentation by Dmitry Berezhkov: “How does the militarization of Russia’s internal politics, social life and economy affect indigenous peoples’ development in Russia?”.

Thank you very much, mister chair.

The war in Ukraine has many different aspects. And it influences indigenous communities in Russia in different ways, sometimes very unexpected ones.

The most obvious item is the dying of indigenous soldiers as members of the Russian army forces. I don’t approve of them; of course, they must be punished by international law for participating in the war.

At the same time, we must remember that Indigenous Peoples in Russia remain among the poorest parts of the population. Their social and economic development and life expectancy are far below the national average. Sometimes military service is the only way for the young man to earn some money. We also need to understand that most Russian soldiers didn’t know they would be sent to the war by the government. And, of course, this is a great tragedy for small numbered indigenous peoples if young men die for some imperial ambitions of the Russian dictator somewhere thousand kilometers away from their home communities.

We know a village where live only two hundred individuals and five young indigenous soldiers are fighting in this war from there. And this whole indigenous Nation is less than two thousand persons itself. Many died. We have confirmed the deaths of indigenous soldiers from Chukotka, Khabarovsk Krai, Tyva, Buratia, and other regions. But we can not even estimate the total numbers. The only way is to study dead soldiers’ open databases and find their indigenous names. But many of them have Russian names, of course. So this research has to be done in the future.

In Russian state media, you don’t find any substantial news about the negative influence of the war on the Russian economy. According to Putin’s propaganda, the Russian ruble has become more strong currency since February; the Russian companies have organized successful import substitution since Western businesses fled the country. We even have now own analog of Macdonalds.

At the same time, the Russian economy, social life, communications, prices, and the everyday life of ordinary people have changed significantly. The costs for food, energy, fuel, delivery for remote indigenous communities have increased drastically. We know villages in Siberia that suffer from stopping air traffic because it became unprofitable to deliver goods there for local businesses. Many remote villages suffer from the absence of pharmaceutical drugs which previously Russia imported from the West. People must buy the cheapest inferior Russian analogous medications, negatively influencing their health. This hit most small villages in the remote regions where indigenous peoples live.

Indigenous peoples as a part of Russian society are today the subject of unprecedented state propaganda. For example, they are now trendy on the Russian Internet videos in which indigenous artists dance and sing to support Vladimir Putin and the Russian Army. While these actions are often initiated by state officials or real supporters of the war in Ukraine, like representatives of the Russian Association of indigenous peoples of the North (RAIPON), we receive many reports that indigenous performers usually don’t know for what purposes they are dancing until they see the videos published on the Internet.

We know that at least several civic activists from indigenous peoples publicly criticized the government for the war in Ukraine and were fined by police according to the new restrictive legislation and stigmatized by society for their antiwar position. The saddest aspect of this is that in some cases, authorities received information about such “crimes” from representatives of RAIPON.

The other aspect of the war and its influence on indigenous peoples of Russia is the rapidly changing rules for doing extractive business on indigenous lands. As you know, the Russian Federation continues to receive the most significant share of the state income from extracting minerals and other resources from indigenous peoples’ lands in the Russian Arctic, Siberia and the Far East. This share is more than half of the Russian export. President Putin uses these hundreds of billions of dollars to buy a weapon to kill innocent Ukrainian people, including indigenous peoples like Crimean Tatars.

But now, we are met with a situation where the government and mining corporations use the pretext of war to loosen the environmental requirements for extractive business operations. Governmental and business propagandists openly say that Russia today is in a fight with US and NATO in Ukraine, and people have to be patient and not ask “too many” environmental questions to business. The ecological legislation is changing to lose any opportunities for civil society to protect the environment.

Western companies, which were most advanced in using the international law standards, including indigenous peoples’ rights and environmental standards, are fleeing the country while their shares go to the state or to Russian oligarchs. To substitute, Western investors and technologies, Russia tries to attract money and technologies from Chine or India, which pay much less attention to environmental standards or human rights.

The huge challenge today for Russian indigenous peoples is suppressing by the state and fleeing from the country the most prominent independent environmental, legal and media experts. Lawyers, journalists, and environmentalists who previously supported indigenous communities today have to work outside Russia, be silent or are subjects of criminalization themselves. The others have a tremendous amount of work with numerous cases.

I can give you a small but obvious example. There is a sacred lake Imlor in Western Siberia in Khanty-Mansiisk autonomous okrug. There lives Sergey Kechimov, who is a Khanty reindeer herder. He lives there with his wife only. Other Khanty left the lake area many years ago because there operates one of the biggest Russian oil companies, Surgutnefegaz, which polluted all territories around the lake. I will not be able to describe his life’s full and tragic story in such a short presentation. Today, oil facilities, pipelines, roads and infrastructure surround the lake’s perimeter several meters from the water.

Several years ago, after one of their regular conflicts, the oil workers blamed him for threatening their lives. So they applied to the police, which sent the case to the court. After several months of investigation, the court sentenced Sergey Kechimov to communal work. That was an unlawful decision for many reasons. For example, the police officers fraudulently forced him to sign a confession of guilt using the fact that Kechimov doesn’t speak Russian well. I can not describe all the details here, but we consider this case pure evidence of indigenous rights defenders’ criminalization tendency in Russia (here you can find more details)

Those days the Russian and international media widely publicized the story of Sergey Kechimov. He received legal and media support from many Russian and international human rights and environmental organizations, including Greenpeace, IWGIA, TheGuardian, Glovalvoices and others. It was not comfortable for Surgutneftegaz to be involved in the prosecution of the indigenous rights defender, so their representatives didn’t appear during the court sessions.

Today, the story repeats. After another conflict between the oil workers with Sergey last September, they beat him but then applied to the police with a false statement and blamed him again for threatening their lives. We believe that by this action, Surgutneftegaz is trying to frighten indigenous peoples and Sergey Kechimov in particular because he is now the last reindeer herder who lives near the Imlor lake with his wife.

But today, this case doesn’t attract media attention as Putin’s regime destroyed the last independent media after February 2022. He has no lawyer as human rights and environmental networks have been shrunk in Russia since the start of this new phase of the war against Ukraine. He even can’t hire the local commercial lawyer as many of them are afraid to protect indigenous rights defenders in court.

These are only some aspects of the influence of the Russian aggression against Ukraine on the indigenous peoples of Russia. We are prepared a briefing note on that topic which we will send to the EMRIP secretariat, but we will continue to work on this to prepare the full report in the future.

Thanks for your attention.