Bolsonaro must be held criminally responsible for assault on the Amazon, say activists

Posted on October 20, 2021 by Viktor Sulyandziga 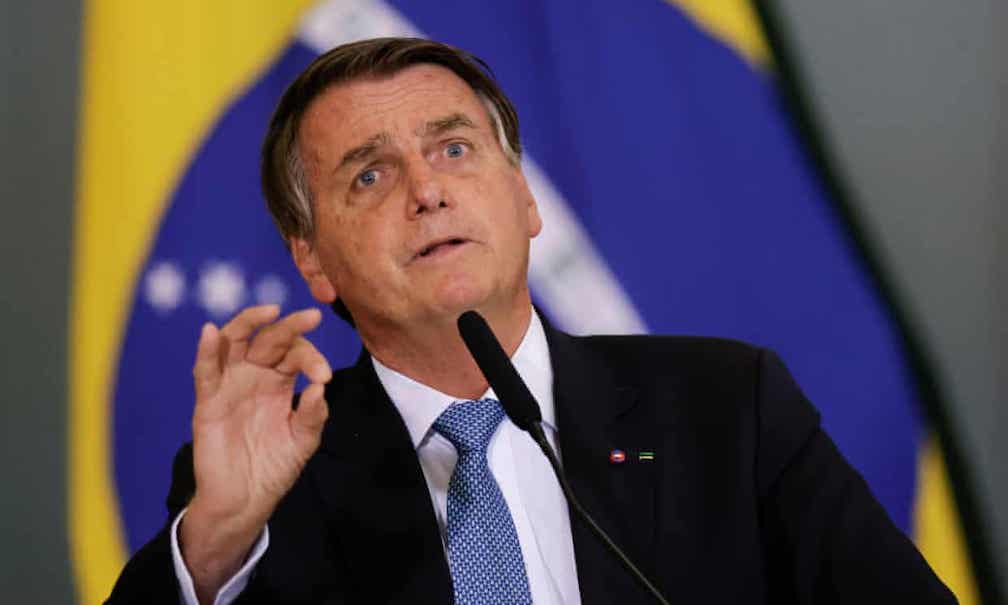 The Brazilian president Jair Bolsonaro must be held criminally responsible for a “ruthless” assault on the Amazon that has exacerbated the climate emergency and imperilled humanity’s very survival, activists have argued in a petition to the international criminal court.

In a submission to The Hague-based tribunal on Tuesday, legal and scientific experts said the “mass deforestation” unfolding under the rightwing nationalist posed a clear and present danger to Brazil, and to the world.

“There is a substantial body of evidence demonstrating the commission of ongoing crimes against humanity within Brazil which requires immediate investigation and prosecution,” the 284-page petition said, pointing to soaring Amazon devastation under Bolsonaro.

“However, the impact … extends far beyond the widespread, ongoing loss of life and deep suffering inflicted upon local communities. State-of-the-art climate science demonstrates that consequent fatalities, devastation and insecurity will occur on a far greater scale regionally and globally, long into the future, through the attributable links between the rapid acceleration in deforestation, its contribution to climate change, and the frequency and intensification of extreme weather events,” it went on.

“Given the multilateral breadth and depth of its impact, the nature of the attack … constitutes criminality of the very highest order,” the plaintiffs said, adding: “The ICC now has the opportunity – indeed the ICC has the duty – to act.”

Bolsonaro, a former paratrooper who has presided over what critics call a historic onslaught against the Amazon and its indigenous inhabitants, has been the subject of three previous ICC complaints since he took office in early 2019.

In August, campaigners asked the court to investigate Brazil’s president for the alleged genocide of its indigenous people, partly as a result of Bolsonaro’s anti-scientific response to the Covid pandemic. “He needs to pay for all the violence and destruction he is leading,” the indigenous leader Sônia Guajajara said at the time.

Johannes Wesemann, the founder of AllRise, the Vienna-based environmental litigation group behind the latest ICC complaint – the fourth against Brazil’s president – said it sought to add an international dimension to Bolsonaro’s alleged offences by exposing their impact on global heating.

Wesemann said: “The government under Bolsonaro directly and indirectly facilitates and thus accelerates the destruction of the Brazilian Amazon. This obviously in turn leads to deliberate and uncontrolled environmental destruction of the ecosystem with catastrophic consequences at a local level … but also with a serious consequence on a global scale.”

“Today, we know emissions attributed to the Bolsonaro administration will cause over 180,000 deaths globally until 2100,” Wesemann said, citing a submission from climatologists including Dr Friederike Otto, one of the lead authors of the recent IPCC report on the climate emergency.

“Our sole purpose … is to ensure that state, private sector and political actors such as Jair Bolsonaro, and past and present members of his government, who intentionally enable such destruction are held legally accountable,” Wesemann said, noting how mass deforestation had a “serious and scientifically proven impact on the global climate – and thus on our long-term survival.”

The Brazilian presidency did not respond to a request for comment on the accusations against Bolsonaro. In recent months Brazil’s government has launched a crackdown on environmental criminals in the Amazon, which critics suspect is designed to convince the international community it is cleaning up its environmental act ahead of the Cop26 climate summit.

Last week Bolsonaro’s recently appointed environment minister, Joaquim Leite, told reporters their country wanted to use the Glasgow meeting to show the world Brazil could be “part of the solution” to the climate crisis and was committed to cutting emissions.

But environmentalists are unconvinced by the pre-Cop rhetorical softening.

← RECONCILIATION AGREEMENT BETWEEN GERMANY AND NAMIBIA:
A PATH TOWARDS REPARATION OF THE FIRST GENOCIDE OF THE 20TH CENTURY
Indigenous Leaders Speak Out About Criminalization and Silencing by Putin Administration →