Posted on September 21, 2021 by Viktor Sulyandziga 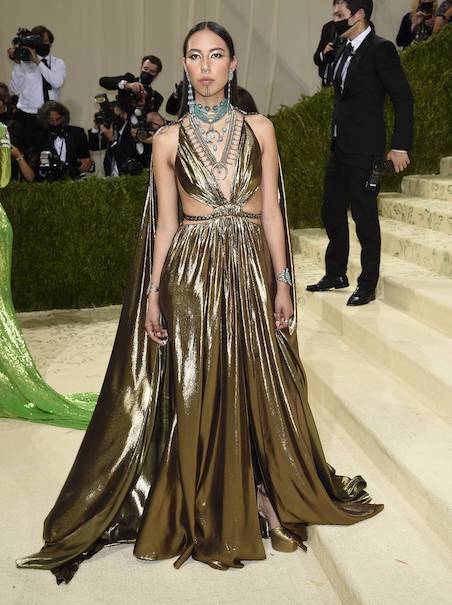 The Indigenous activist and model from the Native Village of Eagle wore a dress by designer Peter Dundas for this year’s theme, “American Independence.” Chasinghorse, who is Han Gwich’in and Oglala Lakota, was photographed on Monday alongside celebrities throughout the night including Mary J. Blige, Megan Fox and Kris Jenner.

Chasinghorse has had a busy year, attracting the attention of some of the highest names in fashion. Vogue magazine recently featured her in an article titled “Thrilling Ascent of Model Quannah Chasinghorse,” which called her “one of modeling’s freshest new faces” and said she “is breaking barriers in an industry that has long overlooked Indigenous talent.”

By late Monday, social media was buzzing about Chasinghorse.

“WHY ISNT ANYONE TALKING ABOUT THIS INDIGENOUS QUEEN WHO SERVED AT THE MET GALA,” Twitter user @takahashiputa said in a post, which garnered more than 300,000 likes. “HER NAME IS QUANNAH CHASINGHORSE AND SHE ATE.”

“Indigenous Model Quannah Chasinghorse Is The Met Gala Queen & No, We Won’t Be Taking Questions,” entertainment website Pedestrian wrote about Chasinghorse’s look. Another website, Refinery29, called her the “breakout star” of the event.

In one of her first posts to Twitter — she already had more than 30,000 followers on that platform as of Tuesday afternoon, and more than 100,000 on Instagram — Chasinghorse said she wanted to “represent Indigenous art and fashion” for this year’s theme.

“I felt very alone there but some people were very sweet to me,” Chasinghorse said. “The Met Gala was a dream.”

Jody Potts, Chasinghorse’s mother, said her college best friend, Jocelyn Billy Upshaw — who was Miss Navajo Nation in 2006 and has known Chasinghorse since she was born — was flown out to New York with her personal jewelry collection.

Upshaw, Potts and Chasinghorse Facetimed with the designer and stylist to help dress Chasinghorse for the gala, Potts said.

Chasinghorse also made her debut at New York Fashion Week, closing for designer Prabal Gurung and walking for Jonathan Simkhai.

In May, Chasinghorse was featured in a 20-page Vogue Mexico spread, which showcased her activism and need for accurate representation in modeling. She was also recognized in Teen Vogue’s 21 Under 21 list highlighting young girls and femmes, and in The Chanel Book’s 2021 issue.

She is known for her advocacy surrounding the Arctic National Wildlife Refuge, and was influential in pushing the Alaska Federation of Natives to declare a climate change emergency at its annual convention in 2019.