Indigenous leaders seek an apology about the mass grave in Albuquerque

Posted on September 11, 2021 by Viktor Sulyandziga 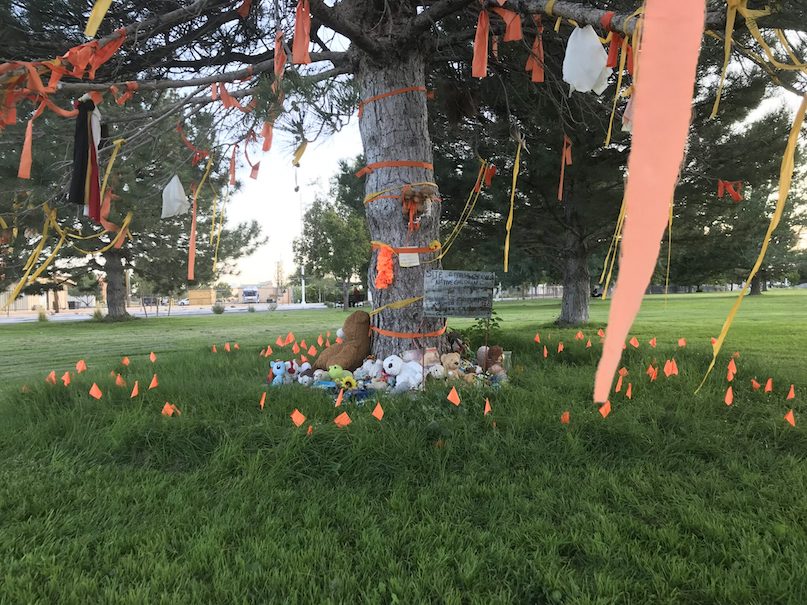 Stakeholders: The public park the city built on top of the site should be closed immediately to recreation

Native American leaders in Albuquerque are shaping the response and reconciliation from the city for a park built over a mass grave site of children who died at the Albuquerque Indian School during the earliest period of the United States federal boarding school policies.

The school housed thousands of students from tribes across the country, mostly from New Mexico, Colorado and Arizona, from 1882 up until 1989.

For more than 50 years, the site northwest of the main campus, now known as 4-H Park, was used as a burial ground for students that attended Albuquerque Indian School (AIS) between 1882 and 1933. It made news this summer when a plaque denoting the gravesite was noticed missing from the park. That plaque indicated there were the remains of 110 children buried there, but the records are incomplete, and the number could be greater.

Now, a coalition of Native American leaders in the city have some ideas about moving forward. A report released this week shows suggestions from local stakeholders about the next steps for city government to address the matters at the 4-H Park grave site.

They want an apology from the City of Albuquerque and a clear investigation into how many remains are on site. If any are identified, the group would like input from tribes to return remains back to their home communities.

They want to see the site honored with protection — a marker and fencing off the southeast corner of the park.

Spiritual healing through ceremony is also considered an urgent matter.

“Our vision for the future of this site is one where voices of our community are heard, one where we invite the families of children buried at the site into the conversation,” said Jolene Holgate (Diné), a panelist in the stakeholders report.

They should be able to have a say about what happens to their family members and how they should be laid to rest.

“There are plenty of other parks in close proximity and other recreation areas that people can continue to utilize,” she pointed out, and there’s no shortage of recreation areas in that part of town.

The report was presented to Mayor Tim Keller’s office and is available for anyone to read on the city’s website. The Office of Native American Affairs is leading the discussion along with the Parks Department and is seeking more public input via email.

Dave Simon is the parks director for the city. “I apologize that it wasn’t right by my predecessors and that we didn’t make it better sooner,” he said during a session with stakeholders on Aug. 17.  “The city is committed to continue working with tribes, pueblos, and community leaders such as yourselves to determine the right path forward.”

The school was established by the Presbyterian Church. In 1884, the federal government assumed control over the school and made New Mexico a prominent hub, enacting federal Indian Boarding School policies set to assimilate Native children into white anglo society.

It’s unclear how many children died at the boarding school and how many are buried at the city park.

We do know the communities where some of these students came from — but never returned.

Through its investigation determining the next steps for the gravesite at 4-H Park, city officials are reaching out to tribal leaders from New Mexico, Arizona and Colorado.

Terry Sloan (Diné/Hopi) is a tribal liaison with the city’s Office of Equity and Inclusion. He’s leading the effort to reach out to the different tribes that are connected to the remains at the gravesite. To date, he’s in contact with leaders from the Pueblo of Zuni, Apache tribes, Southern Ute and Ute Mountain, Hopi, Pima Salt River, Navajo Nation and the Pueblo Council of Governors.

“We’re waiting for the tribes to provide guidance on what they would like us to do with the site. We’re hoping to get an idea soon, and we will begin to look at solutions,” he said. “We’re aware of the cultural and spiritual aspects of the site that we know we must address.”

The suggestions from these tribes will guide the city’s efforts, Sloan said. Any decision-making should be led by tribal consultation and the stakeholders, the report agrees.

Research into the park’s history has led city employees to dive into city archives. In 2017, a report published by local researcher Joe Sabatini along with the Indian Pueblo Cultural Center lays out how the location transitioned from a gravesite operated by the Indian School into a city park. Sabatini’s report also notes that the site could have more than just AIS students.

The city started developing plans for the plot in the ’60s. According to Sabatini’s report, “The city’s landscape architect stated that the city had made an agreement with AIS to seed the land with grass and to plant trees.”

When the remains were unearthed in 1973, Ed Tayitee, a former caretaker for the cemetery told the Albuquerque Journal that the gravesite could also include AIS staff and young children who died at the local Indian Hospital.

“Because there was no way to take them home (to rural areas) in those days,” Tayitee, who maintained the site until 1964, told the newspaper, which splashed on the front page a picture of a baby’s skull found while digging irrigation holes. Tayitee also said the area was fenced off.

Even after the remains had been discovered, the city moved forward with its plans and created a park on top of the gravesite.

In 1995, a public art installation was moved onto the 4-H Park, and a plaque was added underneath with an inscription written by historian Joe Sando (Jemez Pueblo). It reads: “In honor of former Albuquerque Indian School students interred in the burial ground nearby. ‘Few are recalled after going to rest as these resting here. Indeed, they are in peace.’ ”

In 1999, the city commissioned a study on unmarked grave sites across Albuquerque. Another plaque was put at 4-H Park identifying the location as a mass grave site. That plaque was stolen, likely sometime in 2019, but it made news when it was noticed missing in June 2021 around the time gravesites in Canada were in headlines. The missing plaque prompted these discussions about how the city can reconcile with the past while respecting the dead and using this as a teaching moment.

“This is a sacred site, and it needs our best thoughts and best efforts,” said Simon, the parks director. “It’s not a formal apology, but I would like to apologize to the Native American community for the circumstances we find ourselves in. Guidance on how to handle a site like this should come from the most directly affected tribes and pueblos, and at the same time, had I walked into this situation sooner, this is not how I would have preferred to see a sacred place cared for.”

The city’s Office of Native American Affairs conducted a stakeholders meeting with Indigenous leaders in the city asking them to address two questions. Here are the responses:

“What is your vision for the site for future generations?”

“What actions/next steps should the City of Albuquerque take in the next 12 months to move this effort forward?”

← Emmanuel Macron: ‘There is no vaccine for a sick planet’
SHELL OIL LOOKS TO BE A LEADER IN ELECTRIC VEHICLE CHARGING →