Indigenous people are the world’s biggest conservationists, but they rarely get credit for it

Posted on July 2, 2021 by Viktor Sulyandziga 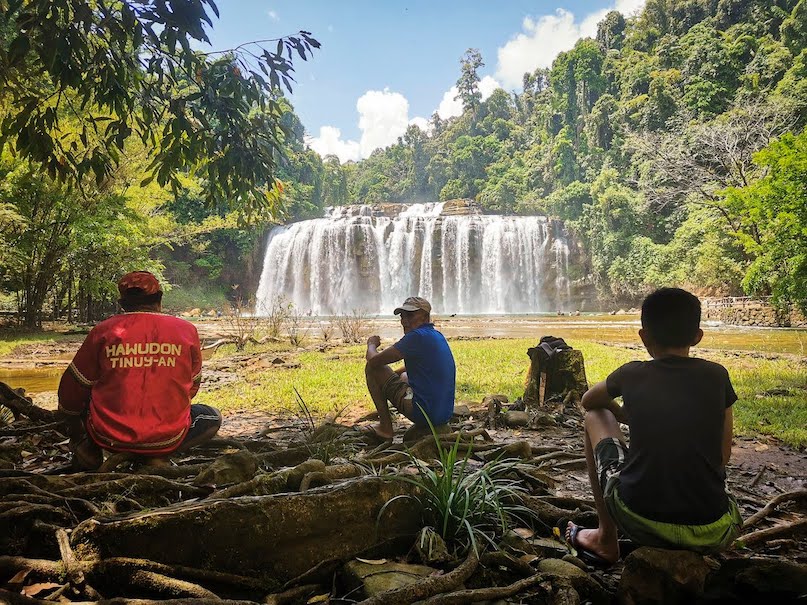 More than 30 percent of the Earth is already conserved. Thank Indigenous people and local communities.

In a lush swath of tropical forest on the eastern coast of Mindanao, the second-largest island in the Philippines, you can glimpse the brilliant plumage of the rare rufous-lored kingfisher or — if you’re lucky — hear the shrill cry of the large Philippine eagle, a critically endangered species.

Wildlife is abundant here, but not because the region was left untouched in a protected area, or conserved by an international environmental organization. It’s because the territory known as Pangasananan has been occupied for centuries by the Manobo people, who have long relied on the land to cultivate crops, hunt and fish, and gather herbs. They use a number of techniques to conserve the land, from restricting access to sacred areas to designating wildlife sanctuaries and an offseason for hunting, owing in part to a traditional belief that nature and its resources are guarded by spirits.

Pangasananan is one of many areas around the world that remain ecologically intact due to the conservation practices of Indigenous peoples or local communities. Although these places are not widely documented by researchers, they cover an estimated 21 percent of all land on Earth, according to a new report by the ICCA Consortium, a group that advocates for Indigenous and community-led conservation.

That means Indigenous peoples and local communities conserve far more of the Earth than, say, national parks and forests. (Protected and conservation areas overseen by countries — some of which overlap with Indigenous territories — cover just 14 percent of all land on Earth, according to the report.) The consortium says its report is the first effort to try to measure the extent of areas conserved by Indigenous peoples and local communities, known as ICCAs or territories of life. 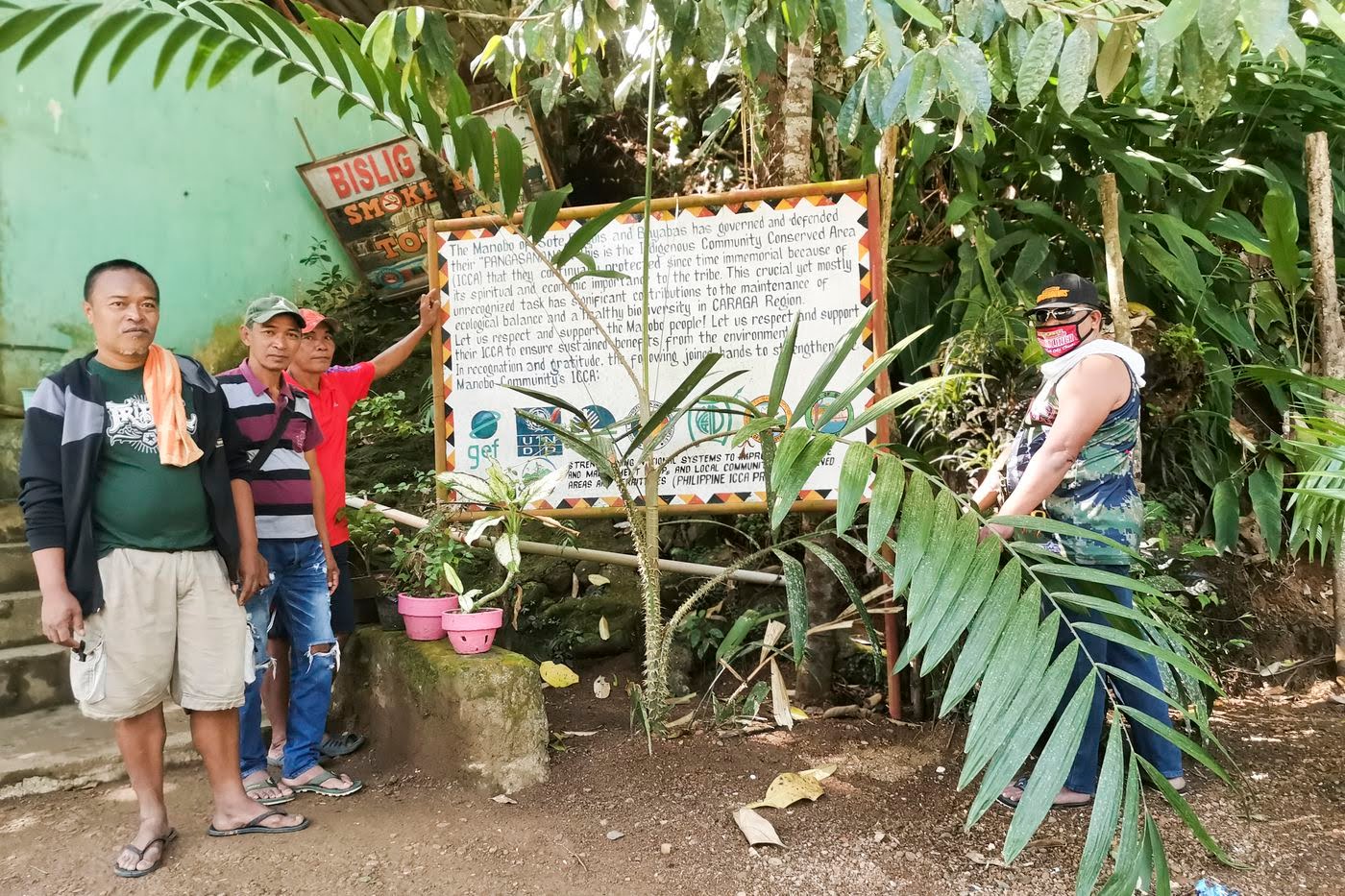 Leaders of the Manobo community made a sign at the entrance of a local ecotourism park surrounding a popular waterfall to inform visitors that it’s part of the Pangasananan territory. Courtesy of Glaiza Tabanao/ICCA Consortium 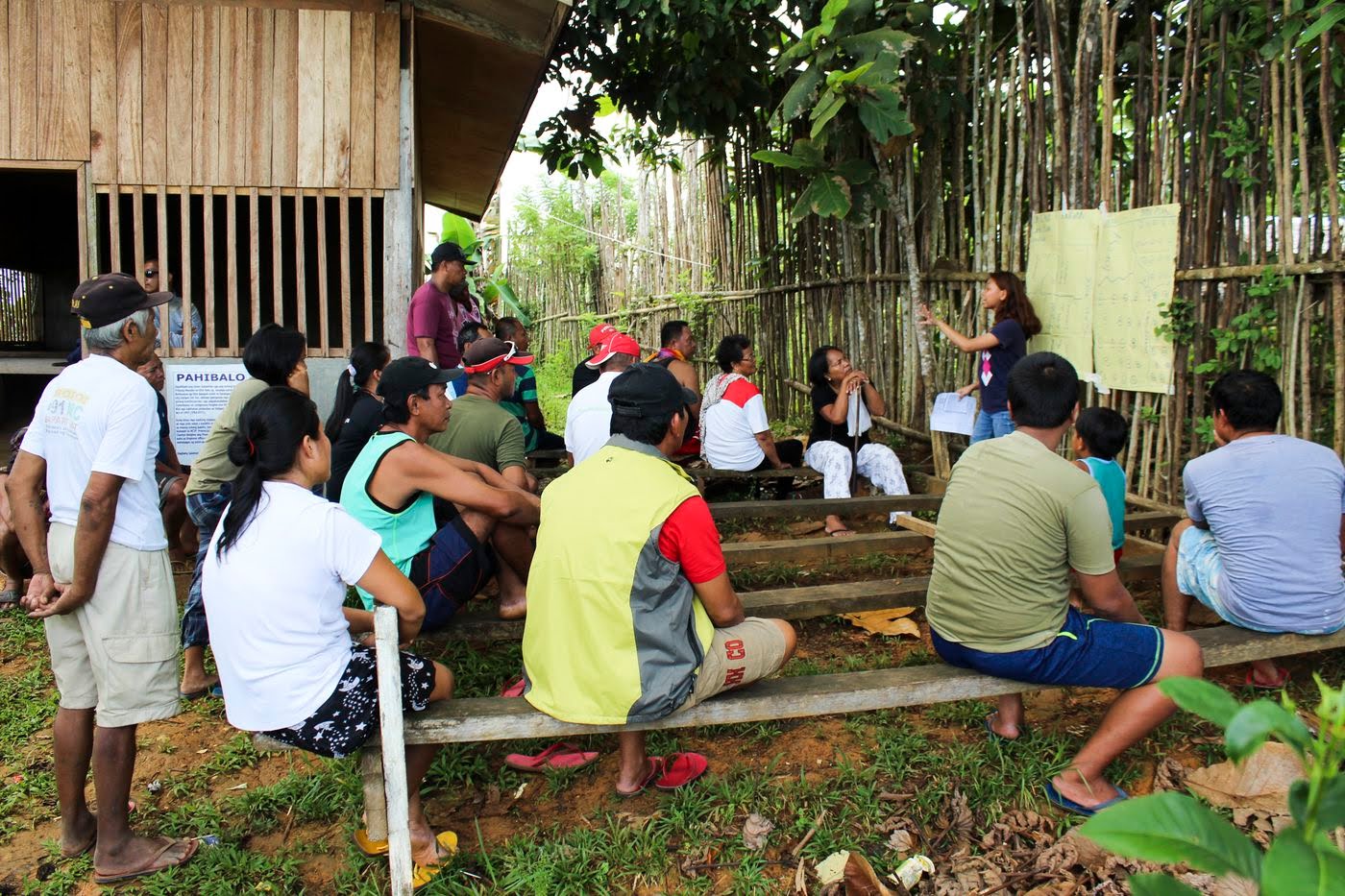 A community meeting in the Pangasananan territory to discuss restoration and farming plans. Courtesy of Virgilio Domogoy/Matricoso

Despite the outsize role that Indigenous peoples play in protecting nature, their contributions often go overlooked. The modern conservation movement was built on the false idea that nature starts out “pristine” and untouched by humans, as the environmental journalist Michelle Nijhuis has written. That put many of the movement’s early efforts, including protected areas, at odds with Indigenous land management — the very activities that created many landscapes that countries are now racing to protect.

“We’re discounted,” Reno Keoni Franklin, chairman emeritus of the Kashia Pomo Tribe in California, told Vox. “Tribal knowledge in land conservation is often used and quoted but rarely matters until a white person says it. Unfortunately, that’s just the truth of the last 100 years of land conservation in the US.”

The stakes couldn’t be higher today. More than 50 countries, including the US and the other wealthy nations that make up the G7, have committed to conserving at least 30 percent of their lands and waters by 2030. Some Indigenous activists fear that reaching that goal, known as 30 by 30, could come at the expense of Indigenous land rights.

But they also see an opportunity to change the paradigm of conservation to one in which the enormous contributions of Indigenous peoples are recognized and supported. The consortium’s report could help propel that shift. It finds that if you consider areas conserved by Indigenous and local communities, in addition to formally protected and conserved areas, more than 30 percent of the world’s land is already conserved.

A huge amount of land is owned or governed by either Indigenous peoples or local communities, which the consortium defines as groups whose cultures and livelihoods are deeply embedded in the land. Estimates vary, but according to the consortium, that number is at least 32 percent globally.

The majority of those areas are conserved and in “good ecological condition,” according to an analysis by the consortium and the UN’s World Conservation Monitoring Centre.

To Indigenous peoples and their allies, this finding is intuitive. “We see ourselves as part of [nature] because it’s life-sustaining,” Aaron Payment, chairperson of the Sault Tribe of Chippewa Indians in Michigan, told Vox. “Our very lives depend on living in ecological balance with our natural resources.” 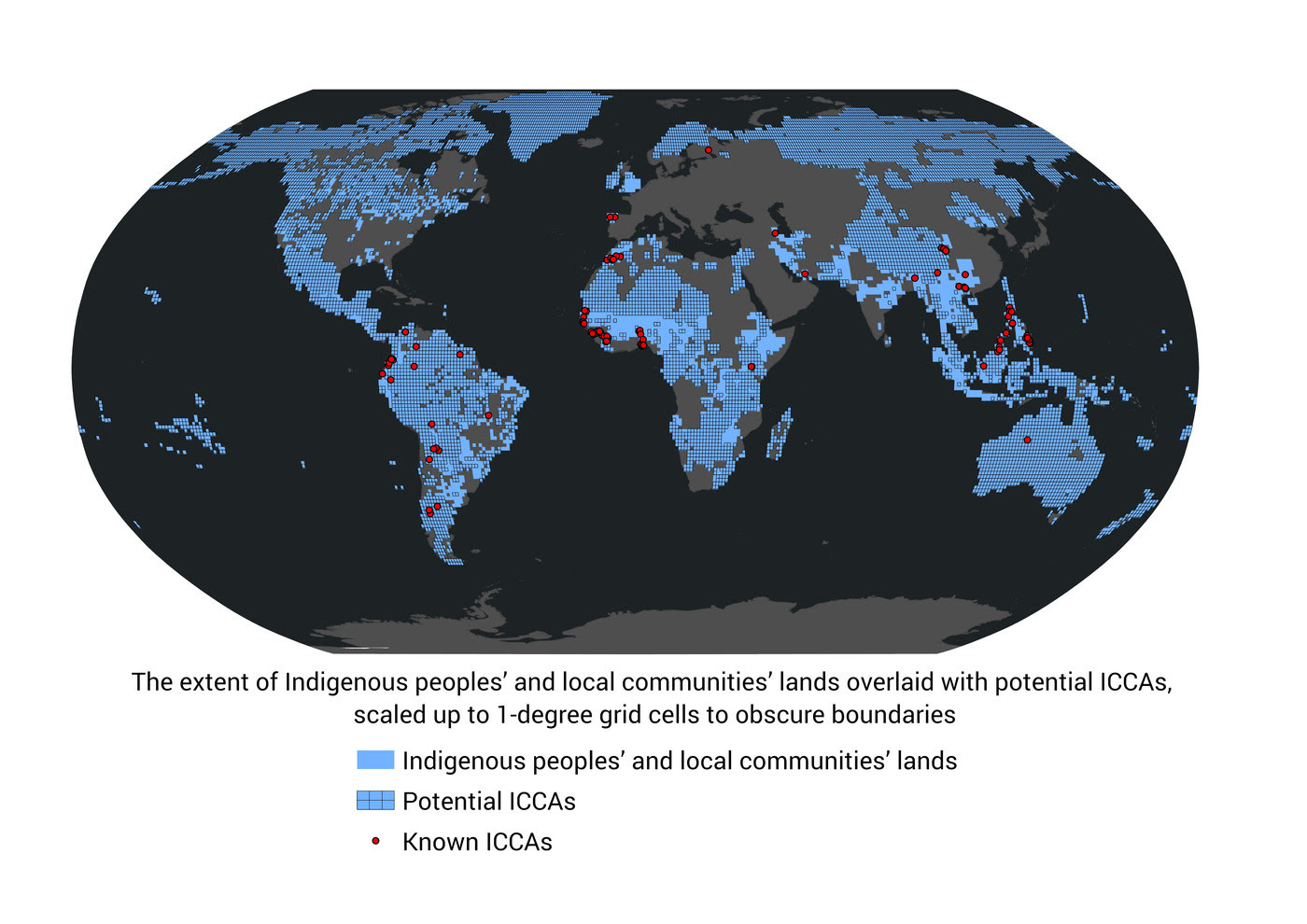 “Potential ICCAs” cover more than a fifth of all land on Earth, the report finds. That number is roughly 17 percent if you only include the ICCAs that fall outside areas conserved or protected by countries and private entities. (The consortium uses the word “potential” because these areas are approximated based largely on an analysis of large data sets; only some of them are documented ICCAs.)

Research has also shown that in some regions, Indigenous control of lands seems to reduce deforestation as much as formal protections, or even more. “Biodiversity is declining more slowly in areas managed by [Indigenous peoples and local communities] than elsewhere,” more than 20 researchers argued in a recent perspective article in the journal Ambio.

While different Indigenous and local groups have different cultures and practices, they tend to share a holistic and human-inclusive view of nature that’s imbued with cultural or spiritual value. It’s this view, in part, that forms the basis for Indigenous land management, which often includes protecting sacred lakes or forests, or creating rules against exploiting certain species. 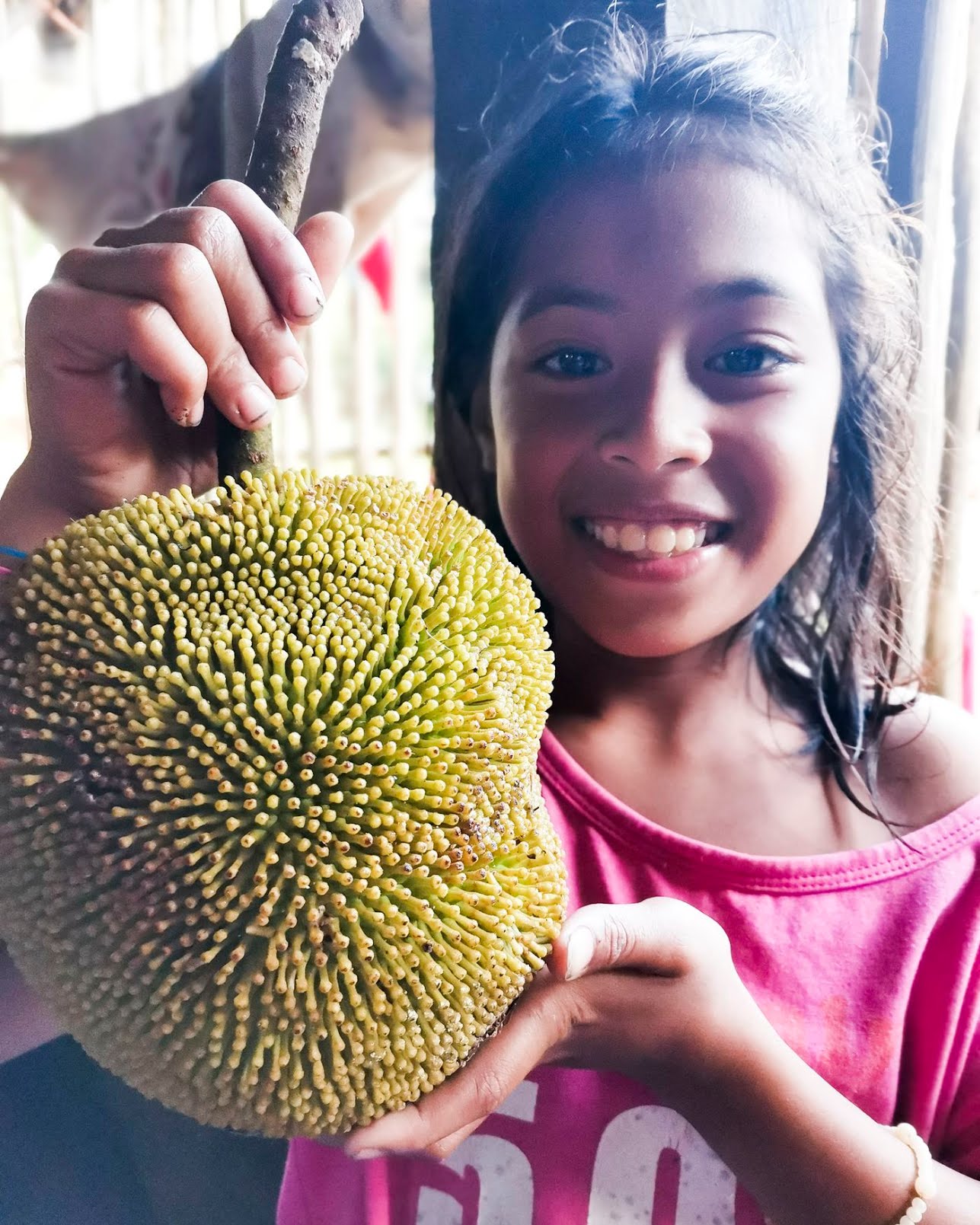 A young girl with her forest harvest near the Manobo community in the Philippines. Courtesy of Glaiza Tabanao/ICCA Consortium 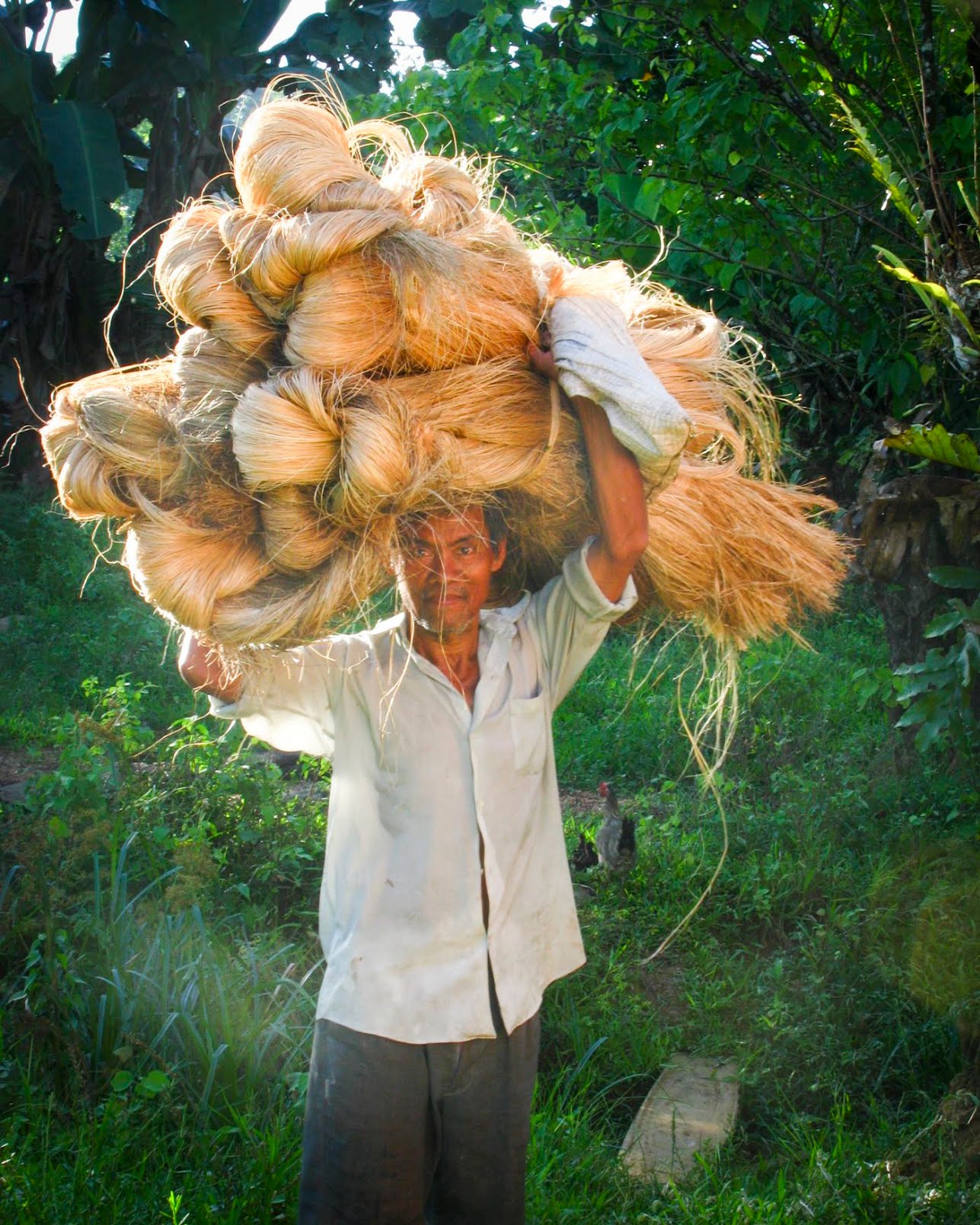 A farmer in the Pangasananan territory carries a bundle of plant fibers to sell in town. Courtesy of Glaiza Tabanao/PAFID

That’s not to say that Indigenous peoples don’t alter habitats and drive down populations of animals, or that they bear the responsibility for protecting wildlife. But in general, the concept of conservation appears to be more embedded in Indigenous traditions, compared to Western cultures.

That certainly seems true in Pangasananan, an old Manobo word that means “a place where food, medicines, and other needs are obtained,” according to Glaiza Tabanao, a consultant for the Philippine Association for Intercultural Development who contributed to the ICCA Consortium report. It has served as a life-sustaining refuge over the years. During World War II, for example, local families retreated to the woods to escape Japanese soldiers. And in more recent times, they relied on it for food as some of their livelihoods collapsed as a result of the coronavirus pandemic.

“This is what we gain from protecting our territory and its forests,” said Hawudon Sungkuan Nemesio Domogoy, a Manobo leader. “We will surely survive this pandemic.”

Some Indigenous peoples risk their lives for conservation

Nonetheless, the value these communities provide to global conservation efforts — defending their land with their lives, in some cases — is often ignored.

“Much of their contributory effort goes unrecognized and disrespected,” wrote Vicky Tauli-Corpuz, a member of the Kankana-ey Igorot people in the Philippines and the former UN special rapporteur on the rights of Indigenous peoples, along with several co-authors, in an article published last year in World Development.

Franklin, the Kashia Pomo tribal leader, told Vox about a local example of this problem. On a recent call to discuss conservation efforts in Sonoma County, a county official (whom he declined to name) mentioned the activities of two local conservation organizations but not of the Kashia Pomo tribe. His tribe has protected thousands of acres of land through parks and easements, Franklin said. “She just completely ignored us,” he said.

In general, most areas that Indigenous peoples protect aren’t considered in tallies by environmental organizations of how much land on Earth is conserved, unless they fall within formal protected or conserved areas. And where these regions do overlap with protected areas, Indigenous peoples are often the de facto custodians of the resident biodiversity — but rarely do they formally govern the areas, according to the ICCA Consortium. 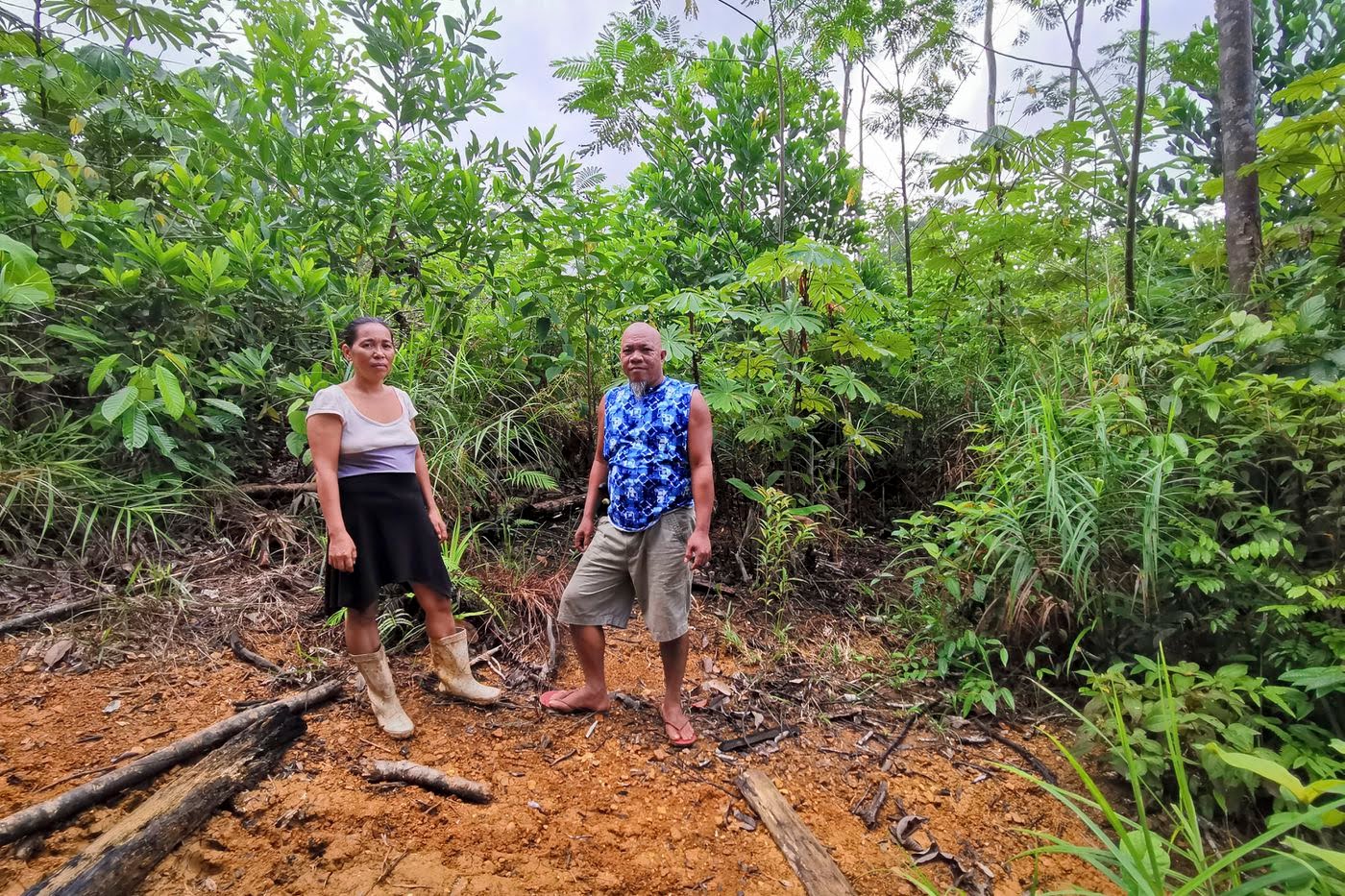 Hawudon Danao and his wife, Victoria, on their farm in the Pangasananan territory, which they left fallow so the soil could regenerate nutrients. Courtesy of Glaiza Tabanao/ICCA Consortium 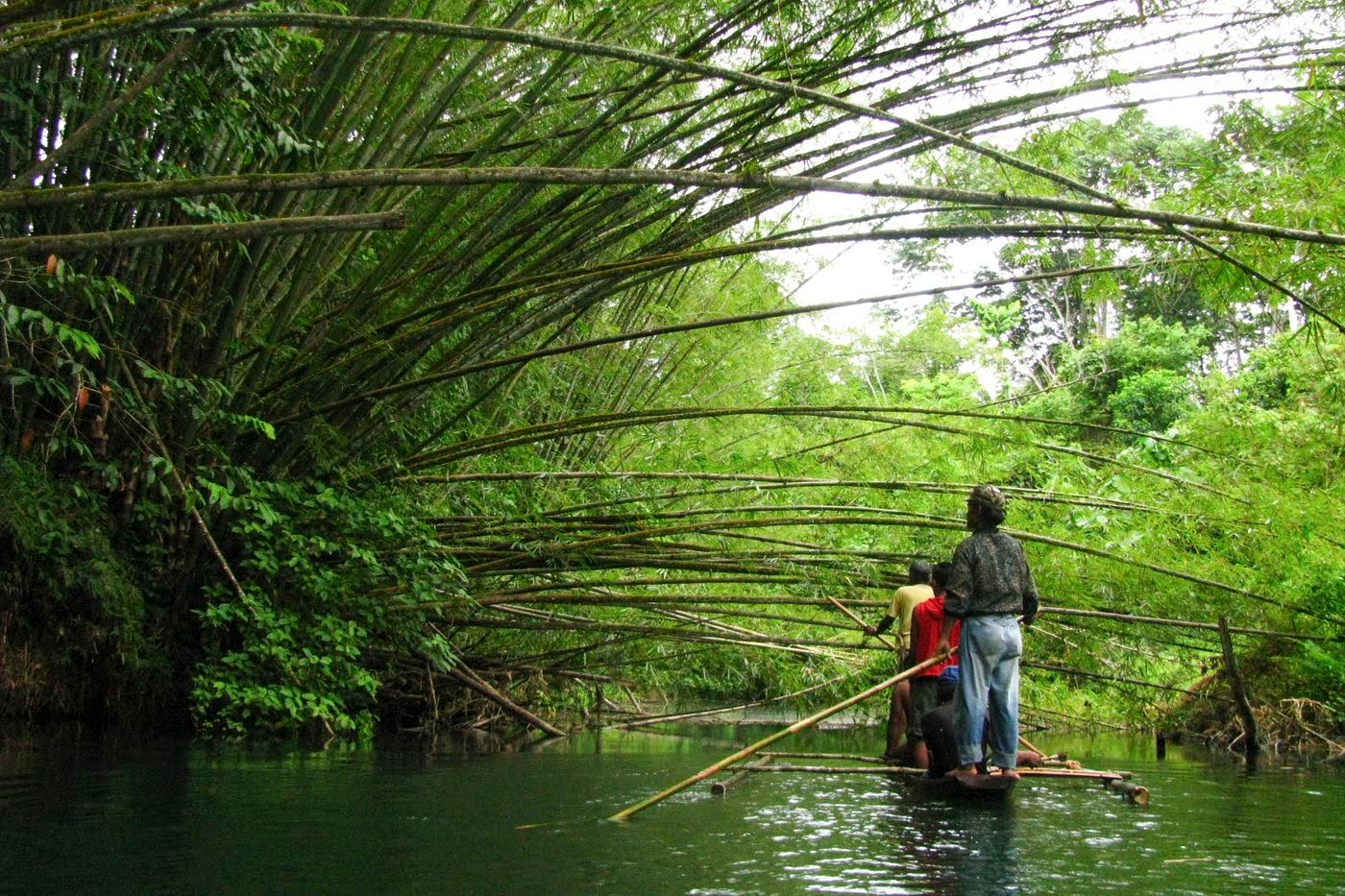 A river in the Pangasananan territory. Courtest of Glaiza Tabanao/PAFID

Indigenous knowledge of land management is also often disregarded, said Victoria Reyes-García, a research professor at Universitat Autònoma de Barcelona and the lead author of the Ambio perspective. In countries like Australia, India, and Bali, Native peoples and local communities have long used tools like controlled burning, grazing, and the construction of canals to sustain themselves and maintain the ecosystems. Yet formal protected areas sometimes put an end to these activities and cause the ecosystems, as they were, to disappear, Reyes-García said. In some cases, that can create problems such as the spread of invasive species.

Making matters worse, these communities tend to lack political power, especially at the national level where most policies relevant to biodiversity are put in place, Reyes-García said. Indigenous advocates also worry that new goals to expand conservation areas under a major international biodiversity treaty, which are being negotiated now, won’t explicitly mention the rights of Indigenous peoples and local communities, and their contributions.

Perhaps most troubling is an issue that extends well beyond the topic of biodiversity: Local communities have legal rights to only a small fraction of the land they live on. According to the Rights and Resources Initiative (RRI), a land rights advocacy organization, countries recognize the ownership rights of Indigenous peoples, local communities, and Afrodescendents on just 10 percent of terrestrial land. (RRI is in the process of updating this figure.)

Some Indigenous advocates fear the “30 by 30” global conservation effort

A failure to respect and recognize the contributions of Indigenous peoples has devastating consequences. In the past, governments often uprooted Indigenous communities in the process of creating protected areas, or restricted their traditional activities. By some estimates, 10 million people in developing nations have been displaced by protected areas.

These practices arguably have spilled into the modern age. In Pangasananan, a protected area designated by the Philippine government overlaps with nearly half of the territory. “It’s viewed by the community as problematic,” in part because it “criminalizes” traditional activities like hunting and fishing, according to Tabanao.

Indeed, “our farms and fallow areas are overlapped by the protected area,” said Hawudon Danao, a hunter in the Pangasananan territory. “I hunt in the forests surrounding our farms. My son fishes in the creeks near our farms. Now that these are not allowed, how are we going to live? Where do they suppose we get our food and money for our needs?” 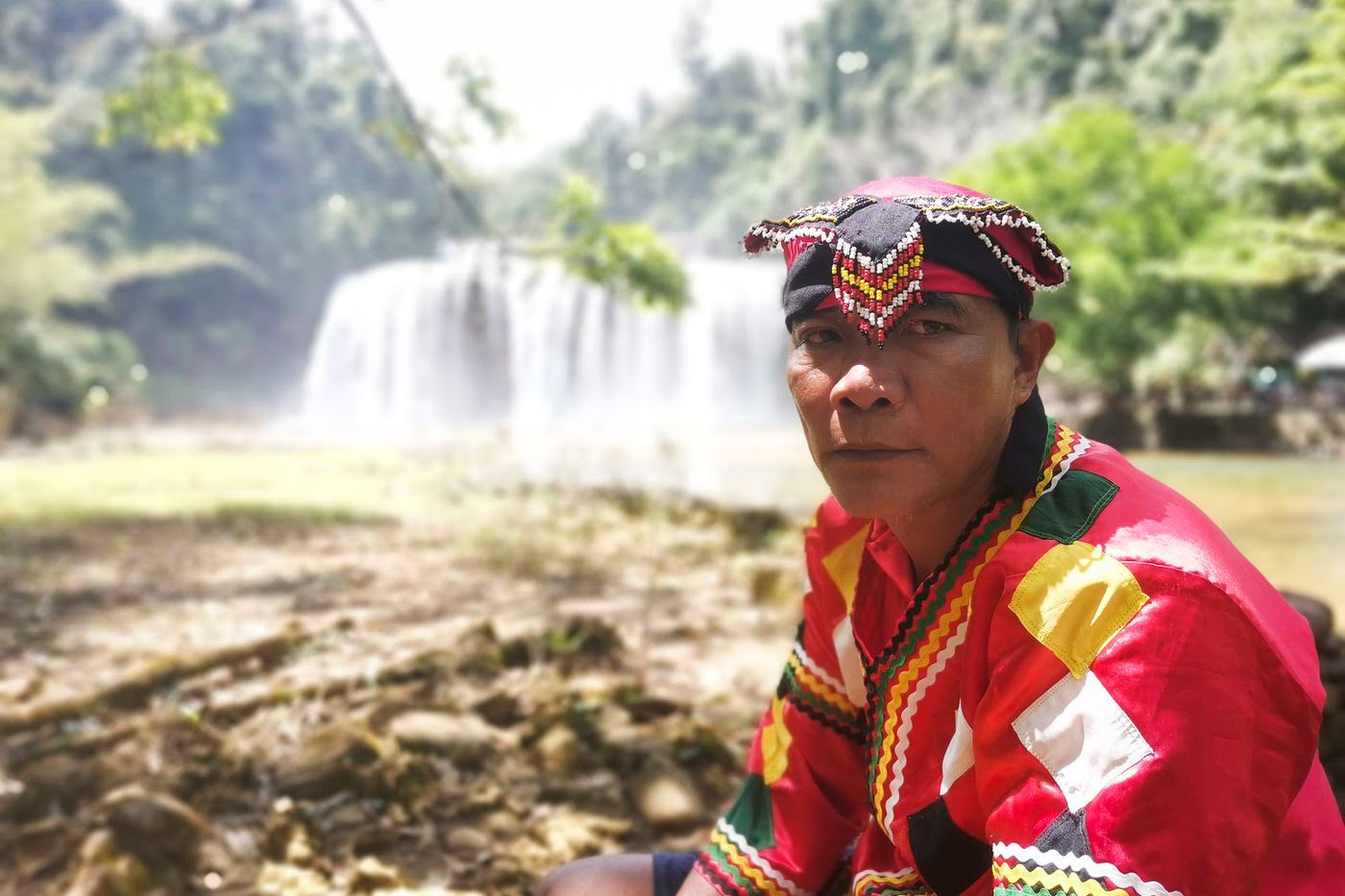 Hawudon Tinuy-an Alfredo Domogoy, the Manobo chieftain, was named after the Tinuy-an falls (pictured behind him). Courtesy of Glaiza Tabanao/ICCA Consortium

That’s why some Indigenous advocates are afraid of what a plan to conserve at least 30 percent of Earth might bring, said Kundan Kumar, director of the Asia program at RRI. One worst-case scenario is that countries and conservation organizations violate Indigenous land rights as they massively expand the world’s network of protected areas — especially considering that many of the remaining biodiversity hot spots are on Indigenous lands. “The fear is there,” Kumar said.

But an alternative scenario is also possible: Countries could seize this moment to support Indigenous and community-led conservation, financially and otherwise. Essentially, this would entail funding these communities to do what they’re already doing, and support efforts to strengthen land ownership, Reyes-García said.

Countries could meet their 30 by 30 goals by including areas conserved by Indigenous peoples and local communities, according to the ICCA Consortium. And a growing body of research shows that one of the best ways to promote conservation is to give legal ownership of land to Indigenous people. Simply acknowledging that much of the world’s intact habitat exists today because — not in spite — of Indigenous peoples would also be helpful, Reyes-García said.

← A decade of the Ruggie Principles: World events and looming legislation are forcing investors to step up on human rights
If you don’t know treaties and sovereignty, you don’t know history →