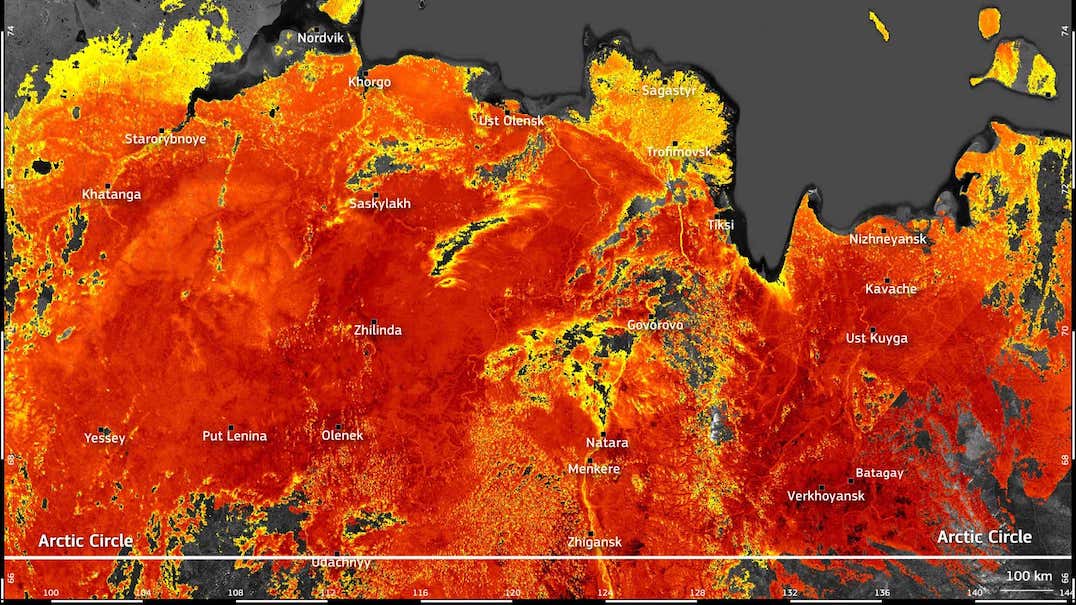 The ongoing climate crisis is not going to spare Siberia.

While many heads swiveled to the American West as cities like Phoenix and Salt Lake City suffered shockingly hot temperatures this past week, a similar climatological aberrance unfolded on the opposite side of the world in the Arctic Circle. That’s not bizarre when you consider that the planet heating up is a global affair, one that isn’t picky about its targets. We’re all the target!

But the ground temperature being so warm is still very bad. Those temperatures beleaguer the permafrost—the frozen soil of yore, which holds in greenhouse gases and on which much of eastern Russia is built. As permafrost thaws, it sighs its methane back into the atmosphere, causing chasms in the Earth.

Besides the deleterious effects of more greenhouse gases in the atmosphere, the permafrost melting destabilizes the Siberian earth, unsettling building foundations and causing landslides. It also exposes the frozen carcasses of many Ice Age mammals, meaning paleontologists have to work fast to study the species that thrived when the planet was much colder. For all the talk of reanimating the woolly mammoth, one’s got to remember: the place they knew is long gone.

The same region also suffered through a heat wave that led to a very un-Siberian air temperature reading of 100 degrees Fahrenheit (38 degrees Celsius) exactly a year ago to the day from the new freak heat. It’s the hottest temperature ever recorded in the region. It was also in the 90s last month in western Siberia, reflecting that the sweltering new abnormal is affecting just about everywhere. And it’s not just the permafrost suffering; wildfires last year in Siberia pumped a record amount of carbon dioxide into the atmosphere, ensuring more summers like this are to come.