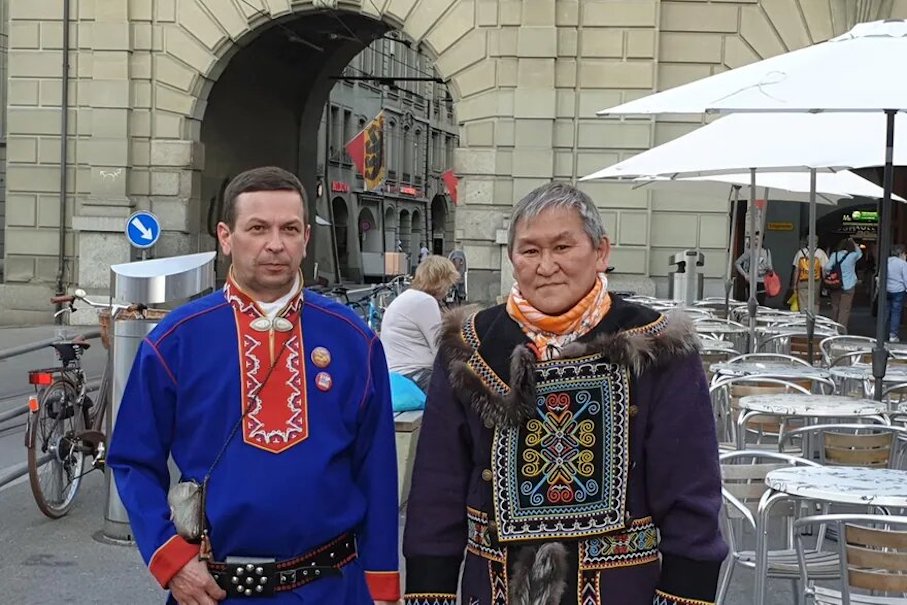 One year ago a fuel storage tank at Norilsk-Taimyr Energy’s Thermal Power Plant No. 3  failed, flooding rivers in northern Russia with up to 17,500 tonnes of diesel oil. Indigenous representatives from Russia’s Far North recently visited Switzerland’s capital to demand action from the Swiss-based subsidiary of the company responsible as well as banks who invest in it.

Gennady Schtschukin, a representative of the Dolgan people, and Andrey Danilov, a delegate from the Sami people on Russia’s Kola Peninsula, appeared at an event in Bern hosted by the Society for Threatened Peoples to discuss the fallout from the second-largest oil spill in modern Russian history. They called on Norilsk Nickel (Nornickel), the owner of the power plant whose subsidiary has its headquarters in the Swiss canton of Zug, to work more closely with their communities to improve the situation.

Nornickel is the world’s leading producer of refined nickel and palladium with a turnover of $14 billion (CHF12.5 billion). The metals it produces are essential to the booming electric car industry. Switzerland’s largest banks, Credit Suisse and UBS, are together among the ten largest investors in Nornickel, according to the NGO Society for Threatened Peoples.

In a March 21 letter to the Business and Human Rights Resource Center, Nornickel acknowledged there are “legacy issues” and took “full responsibility” for the diesel spill. It claims to have collected over 90% of the leaked fuel.

In the same letter, the multinational mentions paying direct compensation worth 174 million roubles (CHF2.2 million) to 699 individuals whose livelihoods depend on fishing Lake Pyasino and the River Pyasina. It also points to cooperation agreements signed with three indigenous associations.

As of April 2021, Switzerland’s largest bank UBS held shares and bonds in Nornickel worth $45 million, according to data compiled by Profundo, a Dutch research group. Credit Suisse has equity corresponding to $27 million in stocks and bonds. It has also issued $268 million in loans.

While in Switzerland, Danilov and met representatives of both Credit Suisse and UBS with help from the Bern branch of the Society for Threatened Peoples (STP). But they encountered closed doors at Nornickel’s subsidiary company Metal Trade Overseas AG in Zug, a low-tax Swiss canton popular with commodity traders.

SWI swissinfo.ch spoke to them about the responsibility of governments and transnational corporations towards small indigenous communities, Russia’s chairmanship of the Arctic Council, and how last year’s disaster unfolded.

SWI swissinfo.ch: Why did you come to Switzerland?

So we came to inform the partners (of Norilsk Nickel) in Switzerland ourselves, but they refused to meet us.

SWI swissinfo.ch: How serious was the Norilsk Nickel accident?

Gennady Schtschukin: Even President Vladimir Putin spoke personally and brought the issue to the federal level. But they concealed [the catastrophe] for two days. After that, they had to organise the decontamination of the affected areas and take measures to prevent the fuel from going further. Of course, they managed to remove most of it [from the environment], but a lot of it landed at the bottom of the river. And it’s very difficult to remove from there.

SWI swissinfo.ch: What led to the disaster? Outdated infrastructure and equipment?

Gennady Schtschukin: It’s all about the old technologies left over from the Soviet Union. They are still in use. Everything is taken out of the ground in terms of minerals, and this happens until the old machinery just begins to crumble. On May 29, 2020, that boiler burst. I’m not an environmental engineer, but I can say that after the affected areas were cleaned and reclaimed, there were no fish. That means the clean-up work was not well done.

It’s quite possible that Norilsk Nickel simply does not have the appropriate technology. In this case, part of the responsibility lies with governments. And we’re not just talking about penalties, we’re talking about special programmes to protect indigenous communities and the consequences must be financed by the state. Because otherwise we simply will not have means of livelihood. We will not have fish; we will not have meat. We will not be able to survive in Arctic conditions.

SWI swissinfo.ch: What is life like in Russia’s Far North, and what’s the potential for dialogue with the government and companies operating there?

Andrey Danilov: Russia’s two-year presidency of the Arctic Council starts right now. There are a lot of documents and regulations including the Arctic Development Strategy until 2035, but they do not even mention indigenous people and their interests! These documents mention corporations, but nothing at all about people.

Companies and other entities which get money and tax breaks for “development” in the region just end up siphoning off resources from the Arctic and do not even think about entering a dialogue with indigenous peoples. The documents say that they “can” have a dialogue but do not oblige anybody to do anything.

In the Soviet era, attention was paid to indigenous peoples because it was politically important for the whole country. It was necessary to say: “Look how our state protects the small communities of the North, no one can go there and do whatever they want without an agreement with the local population and authorities”. And now everything is given to corporations.

SWI swissinfo.ch: Do you think your coming here to Switzerland will have any effect?

Gennady Schtschukin: I’m sure of it. Our partners [at the Society for Threatened Peoples] have taken us under their wing and are watching our security. They will turn to certain local companies that invest in projects implemented [in our regions]. In general, they will address the issues related to the situation of indigenous peoples [of the Russian Far North]. So, I think there will be a result!