“Our proposals for improvements are ignored by Nornickel” 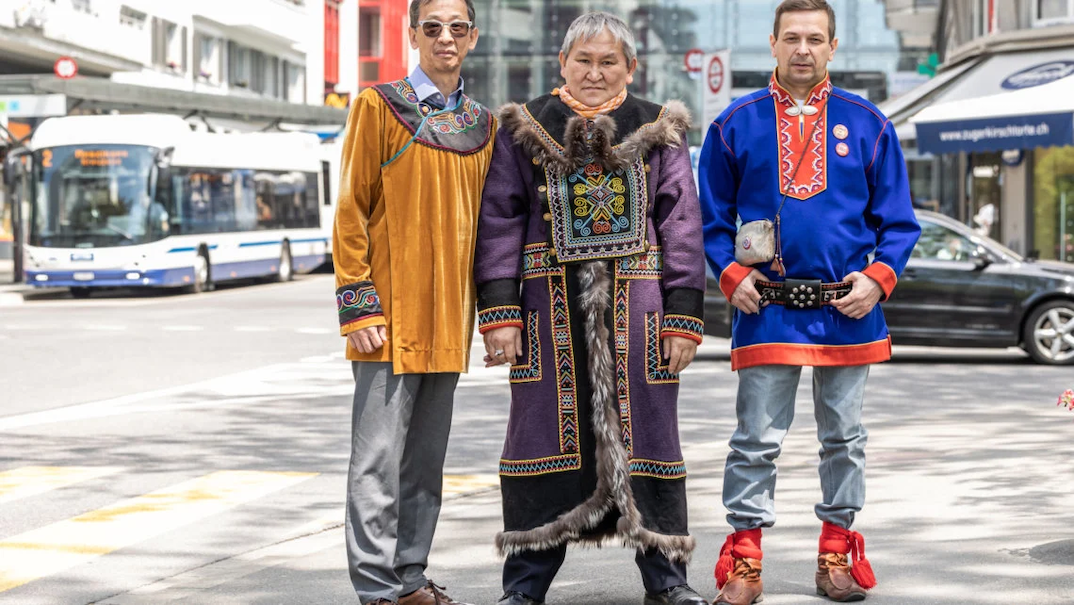 The goal was on the one hand to draw attention specifically to the dire consequences of the diesel oil spill on their traditional way of life and on the other hand to point out to Swiss politics, authorities, and investors how their political and financial actions affect the lives of indigenous peoples in Russia. The reason for the visit is the refusal of the company Nornickel to engage in a dialogue with indigenous communities affected by its business activities.

On May 29th 2020, 21’000 Tonnes of diesel oil spilled into the tundra close to the city of Norilsk, at one of two production sites of Nornickel in the Russian Arctic. The diesel oil polluted major bodies of water, which serve several indigenous communities as a source of drinking water and as fishing grounds to support their traditional way of life.

One year later, those communities now still face a shortage of food and are not able to pursue their economic activities like trading fish and meat as they could before the catastrophe.

Nornickel discredits indigenous activists A Russian court pronounced Nornickel the highest fine ever imposed in Russia for environmental crimes and the company made compensation payments to some communities earlier this year.

However, the compensation was not paid to all those affected and not in the amount promised. Instead of negotiating with all affected indigenous communities, Nornickel discredits various indigenous activists because of their commitment to their communities.

“Our proposals for improvements are ignored by Nornickel,” says the indigenous leader Gennady Shchukin.

Meetings with Swiss investors and confronting the Swiss subsidiary As the company Nornickel is not willing to include the demands of indigenous communities into their plans of mitigating the impacts of the pollution as well as negotiating about the payments for compensation and development of the communities, three indigenous representatives, Gennady Shchukin, Andrei Danilov and Rodion Sulyandziga visited Switzerland in the first week of June 2021. Together with the Swiss NGO Society for Threatened Peoples, they met with two major Swiss Banks, the UBS and the Credit Suisse. Both of them together are among the ten largest lenders to Nornickel.

The visiting delegation calls on the banks to make use of their leverage and to demand the respect of indigenous peoples rights from their business partners.

“We hope that we will be better heard in Switzerland and that the situation of the indigenous people in the Russian Arctic will finally improve as a result”, says Rodion Sulyandziga.

In addition, the delegation wanted to visit the Swiss subsidiary of Nornickel, Metal Trade Overseas SA, but they came up in front of closed doors. The indigenous representatives demand that the company exert its influence on the parent group so that it respects the rights of indigenous peoples in its business activities. They also want the company to adequately compensate the communities for the massive environmental damage caused by the diesel oil spill and take measures to prevent further environmental pollution.

Arctic resource boom worsens situation of indigenous peoples The oil spill in May 2020 shows that indigenous communities’ claims to their ancestral lands, to self-determination and to a place at the negotiation table are being neglected in the context of the increasing resource boom in the Arctic. With its wealth of resources, which are becoming more accessible due to global warming, the region is attracting the attention of states and corporations.

They are looking for a lucrative deal on previously untapped natural resources, which are also needed for the production and use of renewable energies and the manufacturing of batteries.

← Putin’s Climate Envoy Should Be Persona Non Grata
The COVID 19 impact on indigenous peoples of the Russian Arctic, Siberia, and the Far East →

One Comment on ““Our proposals for improvements are ignored by Nornickel””