Posted on June 9, 2021 by Viktor Sulyandziga 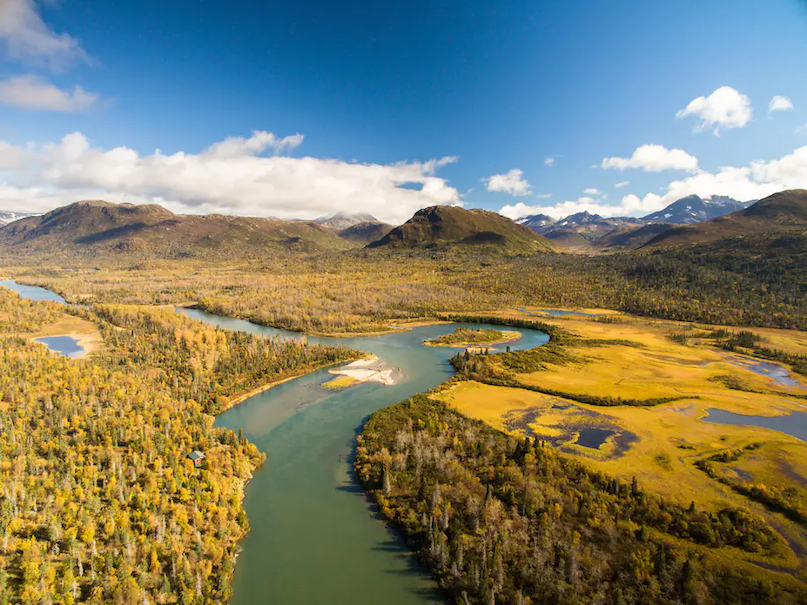 Growing up in a small village in southwest Alaska, Sarah Thiele had a childhood defined by sockeye salmon.

Her father caught the silvery-red fish in the summer by the net-full as a commercial fisherman while her mother would cure and cold-smoke hundreds of filets so Thiele and her eight siblings, plus the family’s team of sled dogs, could dine on sockeye year-round.

Now 66, Thiele is a board member of the Pedro Bay Corp., an Alaska Native group that owns land near Bristol Bay, the site of the most prolific sockeye fishery in the world. It is also the precise spot where the backers of the Pebble Mine hope to build a road to transport ore.

Late last month, Thiele and nearly 90 percent of the corporation’s shareholders voted to let the Conservation Fund, an environmental nonprofit organization, buy conservation easements on more than 44,000 acres and make the land off limits to future development — including the mining road.

“I feel like we are doing our mission of preserving our heritage and our pristine lands from any development,” she said. “That is totally our identity, the fish and our land.”

In exchange for the surface rights, the corporation would receive nearly $20 million, including $500,000 for education and cultural programs for those in the village.

The deal — which has not been previously reported — will make it difficult for backers of a massive open-pit gold and copper mine to carry out their project because the new protections cover a portion of a critical route the Pebble Limited Partnership plans to use to transport ore from the mine.

“I would say if it’s not the nail in the coffin, it’s just waiting for the last tap of the hammer,” Tim Troll, executive director of the Bristol Bay Heritage Land Trust, who helped negotiate the easement, said in a phone interview. Given the agreement, he added, “I just don’t see any way that they could do this.”

The mine was already in trouble. President Biden expressed opposition to the project during last year’s campaign and the U.S. Army Corps of Engineers denied a permit for the mine in November. But the Pebble Limited Partnership is appealing the Corps’ decision and said in a statement that the conservation deal would not change its plans.

The fate of Bristol Bay, its multibillion-dollar commercial fishing and tourism industry and the Indigenous people who live there has been contested for more than a decade. Although many of Alaska’s elected officials have supported mining there, an unusual coalition of environmentalists, Republicans, commercial fishermen and Alaska Natives helped persuade the Trump administration to block the mine project last year.

For those with ties to the small village of Pedro Bay on the shore of Lake Iliamna, the state’s largest lake and a natural nursery for Bristol Bay’s spawning salmon, the threat that some future version of the mine could damage this precious salmon habitat remains a chilling possibility.

“The salmon sustained us for how many thousands of years,” said Thiele, vice chair of the Pedro Bay Corp.’s Board of Directors. “So you really have to be very conscious that you don’t disturb their habitat.”

The conservation groups said they have begun a fundraising effort to pay for the easement among organizations and individuals interested in preserving wild Alaska and the salmon population. They plan to reach out to Bristol Bay’s commercial fishing industry, which has been valued in recent years at more than $2 billion, as well as other environmental organizations.

Pedro Bay residents would retain ownership of their land and be allowed to access it for subsistence hunting and fishing as well as cultural practices and some forms of economic development, such as tourism, said Larry Selzer, president and chief executive of the Conservation Fund.

“Iliamna Lake is the largest wild sockeye salmon fishery in the world. It’s a magnificent resource, unprecedented value, both economically and culturally, in addition to the wildlife values,” Selzer said.

For the Conservation Fund, the “primary objective” of the agreement is to protect the critical salmon habitat, Selzer said, but a secondary benefit is “to eliminate the threat of the potential construction of an industrial transportation route as part of the proposed Pebble Mine project.”

Under the Obama administration, the Environmental Protection Agency took the unusual step of vetoing the prospect of a mine in 2014 on the grounds it could imperil the region’s sockeye salmon fishery. But the agency reversed course during the Trump administration, allowing the Pebble Limited Partnership to apply for a federal permit.

The company, a subsidiary of Canadian-owned Northern Dynasty Minerals, estimated its proposed 20-year operation would span more than 13 miles and require the construction of a 270-megawatt power plant, natural-gas pipeline, 82-mile double-lane road, elaborate storage facilities and the dredging of a port at Iliamna Bay. EPA concluded the project would result in the permanent loss of 2,292 acres of wetlands and more than 105 miles of streams.

But in September, the nonprofit Environmental Investigation Agency released secretly recorded conversations in which Northern Dynasty Minerals chief executive Ronald Thiessen and his associate spoke about seeking political favors from Republicans in Alaska and Washington. Both of Alaska’s senators, Republicans Lisa Murkowski and Dan Sullivan, subsequently questioned the idea of approving the mine, and the Corps then determined the plan did not meet the Clean Water Act’s requirements.

Asked to comment Monday, Pebble Limited Partnership spokesman Mike Heatwole said in an email: “Our focus remains on working with the U.S. Army Corps of Engineers as its conducts its administrative appeal of the Pebble Project Record of Decision. This recent development hasn’t really changed that focus in any way.”

The Alaska Natives around Iliamna Lake have long relied on subsistence hunting and fishing, including for moose, seals, trout and salmon. There are also fishing lodges on the lake that attract anglers from around the world.

The path to protect the land along Iliamna Lake dates back nearly a decade, according to Troll, when genetic studies of the salmon in the lake by University of Washington researchers indicated the northeast corner of Iliamna — and the rivers that fed it — were the most productive breeding grounds for millions of salmon that eventually make their way out into Bristol Bay.

In 2017, the Bristol Bay Heritage Land Trust, with the help of the Conservation Fund, negotiated an easement covering islands in the middle of the lake, more than 12,000 acres also owned mostly by the Pedro Bay Corp. That deal helped pave the way for the most recent agreement to conserve three large parcels in the northeast portion of the lake where three rivers — Knutson Creek, Pile River and Iliamna River — feed into it.

The Iliamna Lake watershed is “the most important salmon fishery in the entire world,” Selzer said, “and so this project has extreme importance for the future of the salmon and the rest of the ecosystem.”

The fact that one of the proposed roads leading from the Pebble Mine project would pass through the Pedro Bay Corp.’s native-owned land near the shores of the lake only added to the urgency for those looking to protect this habitat in recent years.

Although it is unclear whether the new easement would block the company from constructing what it calls “the northern route,” Selzer said it would be “extremely difficult” and probably would deter future investors from financing the project. The company identified the route leading to Cook Inlet as its preferred route, and the Corps determined that it was the “Least Environmentally Damaging Practicable Alternative” for transporting minerals from the mine.

Matt McDaniel, the chief executive of the Pedro Bay Corp. and a spokesman for the community, said that for the corporation and the village of Pedro Bay, the proceeds from the conservation easement “immediately will impact and support these communities and we can send our kids to school and pass out dividends.”

Their decision to enter the agreement to preserve their land “was not specifically about Pebble,” he said. “It’s more about protecting the land from the effects of any type of development.”

Thiele — who now lives in Wasilla, but returns each summer to the village to fish — noted it is wedged in between the lake and the mountains, leaving little room for development.

“I’ve always been a little terrified about a big road going through,” she said. “We want people to be able to go there and experience it the way their mothers, their grandparents, their great-grandparents experienced it.”

← ‘I promised Brando I would not touch his Oscar’: the secret life of Sacheen Littlefeather
Why Indigenous knowledge should be an essential part of how we govern the world’s oceans →