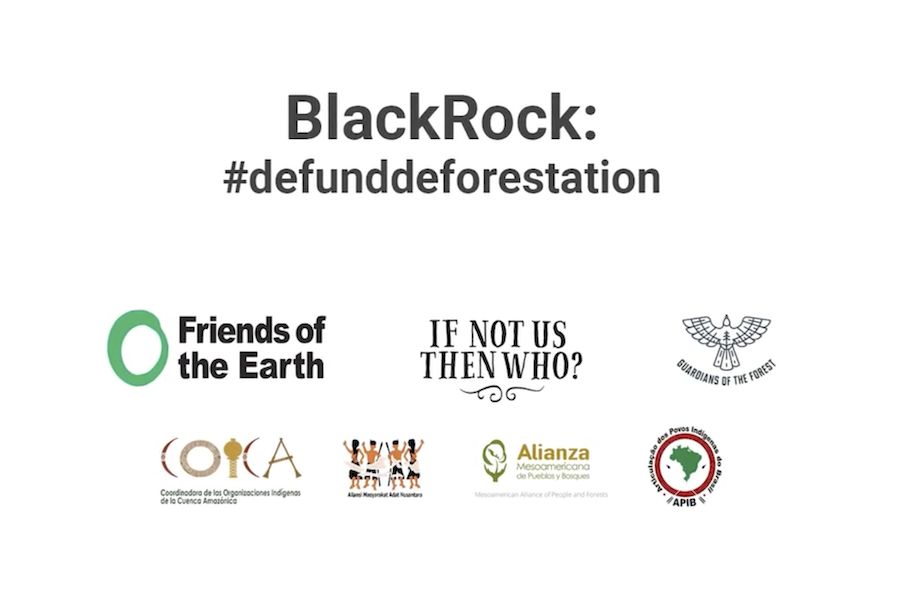 BlackRock has yet to produce concrete policy addressing land rights, deforestation, and human rights abuses in its portfolios

Today, over 80 renowned Indigenous and frontline activists from around the world issued a public letter criticizing BlackRock’s role in violating the land rights and human rights of Indigenous peoples and other traditional communities. The signatories, including several recipients of the prestigious Goldman Environmental Prize, point to BlackRock’s continued large-scale investments in fossil fuel and deforestation-linked companies that violate human rights, and demand that the asset manager cease these investments.

Eloy Terena, Legal Coordinator of the Association of Brazil’s Indigenous Peoples (APIB), and one of the letter’s signers said: “BlackRock’s investments have an impact on our lives and our communities, and the company’s leadership, therefore, has a responsibility for our future. If the Amazon is destroyed, the future of the entire planet is at risk.”

Last week, BlackRock released a memo on “natural capital”, a memo on human rights impacts, and updated engagement priorities. In these memos BlackRock encouraged the companies it invests in to adopt “no deforestation” policies, to account for biodiversity in their operations, and to obtain the free, prior and informed consent (FPIC) of indigenous peoples “for initiatives that affect their rights.”

Despite the urgency of these issues, BlackRock did not lay out any clear accountability mechanisms to assure that its “engagement” results in concrete improvements for communities, ecosystems, and the planet in these new memos. But this new acknowledgment is a step in the right direction that comes after years of campaigning by Indigenous leaders and civil society organizations demanding that BlackRock take responsibility for its role in deforestation and human and Indigenous rights violations.

Sonia Guajajara, Executive Coordinator of the Association of Brazil’s Indigenous Peoples (APIB), said, “Despite its latest announcement on ‘natural capital,’ BlackRock does not have a concrete policy in place to handle investments that impact Indigenous peoples and our territories. BlackRock has not pledged to pressure companies to end deforestation in the Amazon. Our challenge to BlackRock is clear: safeguard Indigenous peoples’ rights and eliminate deforestation and human rights violations from its portfolios.”

Today’s letter outlines the urgent need for action, stating: “While BlackRock makes pledges to ask portfolio companies to cut emissions in the future, our forests are being razed, our land is being stolen, and our people are being killed, today.”

Despite BlackRock’s January commitment to achieve net-zero by 2050, the asset manager has, according to the letter, done “little to ensure [its] investments respect human rights, land rights, and the self-determination of Indigenous and local communities.” BlackRock remains one of the largest investors in the two biggest drivers of the climate crisis: fossil fuels and industrial agricultural commodities linked to deforestation, such as palm oil, soy, cattle, pulp, and paper. These industries regularly violate the rights of Indigenous and local communities. BlackRock has no policies in place that address deforestation, human rights, or land rights.

The signers of today’s letter hail from some of the world’s most sensitive biomes, including the Amazon and the rainforests of Indonesia and West Africa. They write that it is not just their land, homes, and cultures that are at stake, but their lives.

Goldman Prize recipient Alfred Brownell, Liberian human rights and environmental lawyer, who was forced to flee his country after threats to his life, said: “I am quite surprised that Mr. Fink and BlackRock have not yet responded to my 2019 letter. The agribusiness companies BlackRock finances in Liberia’s Upper Guinea Forest are not only destroying the precious habitat of endangered pygmy hippos and chimpanzees, they are dispossessing my people of their land and the right to choose their own model of development. Instead of adding value to community-driven enterprises that coexist with nature, BlackRock’s investments are obliterating shrines and burial grounds and wiping out centuries of history, culture, religion, customs, and values that indigenous communities hold sacred, further impoverishing indigenous communities.”

“Communities around the world are facing an epidemic of violence, murder, and criminalization at the hands of extractive industries. In 2019, more than four land and environmental defenders were murdered each week for protecting their traditional lands. Frontline communities and activists are often the first responders to the destructive – and deadly – impacts of the climate crisis as they confront companies that destroy forests, pollute water sources, and drive species into extinction,” the letter states.