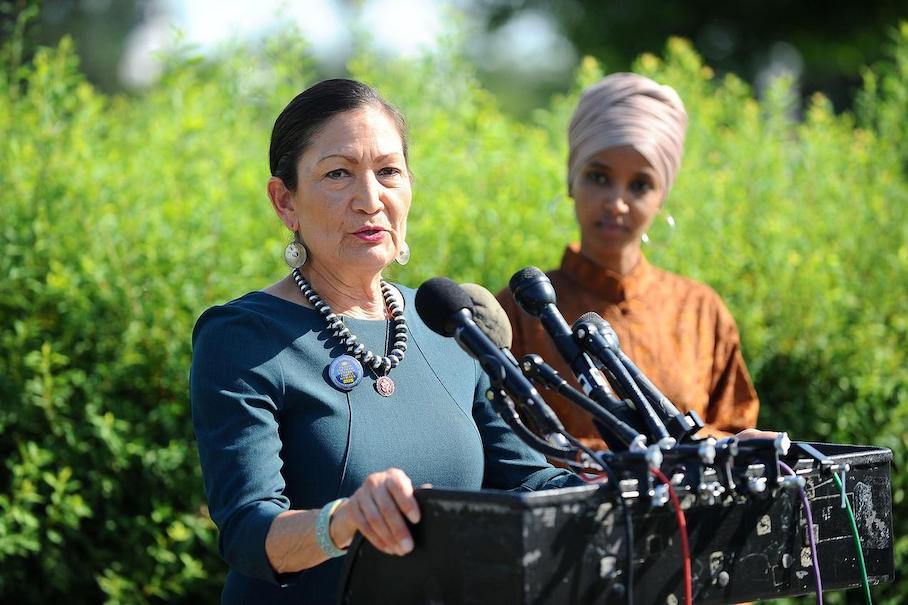 The Senate confirmed Ms. Haaland to lead the Interior Department. She’ll be charged with essentially reversing the agency’s course over the past four years.

WASHINGTON — Representative Deb Haaland of New Mexico made history on Monday when the Senate confirmed her as President Biden’s secretary of the Interior, making her the first Native American to lead a cabinet agency.

Ms. Haaland in 2018 became one of the first two Native American women elected to the House. But her new position is particularly redolent of history because the department she now leads has spent much of its history abusing or neglecting America’s Indigenous people.

Beyond the Interior Department’s responsibility for the well-being of the nation’s 1.9 million Native people, it oversees about 500 million acres of public land, federal waters off the United States coastline, a huge system of dams and reservoirs across the Western United States and the protection of thousands of endangered species.

“A voice like mine has never been a Cabinet secretary or at the head of the Department of Interior,” she wrote on Twitter before the vote. “Growing up in my mother’s Pueblo household made me fierce. I’ll be fierce for all of us, our planet, and all of our protected land.”

Republican opposition to her confirmation centered on Ms. Haaland’s history of fighting against oil and gas exploration, and the deliberations around her nomination highlighted her emerging role in the public debates on climate change, energy policy and racial equity. She was confirmed on a 51-40 vote. Only four Republican senators — Lisa Murkowski and Dan Sullivan of Alaska, Susan Collins of Maine and Lindsey Graham of South Carolina — voted for Ms. Haaland’s confirmation.

Senator Mitch McConnell of Kentucky, the Republican leader, said supporting her confirmation “would be voting to raise gas prices for families who are already struggling, to raise fuel and heating bills for seniors on a fixed income, to take the tough times we’ve been going through and make them even tougher.”

The new interior secretary will be charged with essentially reversing the agency’s mission over the past four years. The Interior Department, led by David Bernhardt, a former oil lobbyist, played a central role in the Trump administration’s systematic rollback of environmental regulations and the opening up of the nation’s lands and waters to drilling and mining.

At the same time, Ms. Haaland will quite likely assume a central role in realizing Mr. Biden’s promise to make racial equity a theme in his administration. Ms. Haaland, a member of the Laguna Pueblo who identifies herself as a 35th-generation New Mexican, will assume control of the Bureau of Indian Affairs and the Bureau of Indian Education, where she can address the needs of a population that has suffered from abuse and dislocation at the hands of the United States government for generations, and that has been disproportionately devastated by the coronavirus.

“You’ve heard the Earth referred to as Mother Earth,” Ms. Haaland said at her Senate confirmation hearing. “It’s difficult to not feel obligated to protect this land. And I feel every Indigenous person in the country understands that.”

Lynn Scarlett, who served as deputy interior secretary under George W. Bush and is now a senior official at the Nature Conservancy, warned, “It’s an enormous job, an enormously complex job.”

“The Interior Department has a footprint in all 50 states,” she said. “Its policies touch each and every American.”

As the agency takes on a newly muscular role in addressing climate change, she added, the department “will have to deal with new strategies for managing more intense wildfires on public land and chronic drought in the West. It’s hard to overstate the challenges with water.”

Among the first and most contentious items on Ms. Haaland’s to-do list will be enacting Mr. Biden’s campaign pledge to ban new permits for oil and gas projects on public lands.

Already, the White House has placed a short-term halt on issuing new oil and gas leases on public lands, which has drawn fierce attacks from Republicans and the oil and gas industry.

Ms. Haaland’s ability to implement that ban successfully could have major consequences both for the climate and for the Biden administration. According to one study by Interior Department scientists, the emissions associated with fossil fuel drilling on public lands account for about a quarter of the nation’s greenhouse gases. But the policy will most likely be enacted at a time when gasoline prices are projected to soar — spurring almost-certain political blowback from Republicans ahead of the 2022 midterm elections.

For the drilling ban to survive legal challenges, experts say, Ms. Haaland will have to move with care.

“They may attempt a total ban, but that would be more vulnerable to a court challenge,” said Marcella Burke, an energy policy lawyer and former Interior Department official. “Or there’s the ‘death by a thousand cuts’ approach.”

That approach would make oil drilling less feasible by creating such stringent regulations and cleanup rules that exploration would not be worth the cost.

“Each step will be challenged in the courts, but it’s like diversifying your portfolio,” Ms. Burke said. “It lowers the risk that one single ban will be thrown out in courts.”

Complicating Ms. Haaland’s efforts to formulate new land management policies will be a logistical hurdle: the planned relocation of the Bureau of Land Management, an agency within the Interior Department that oversees oil and gas drilling policies. The bureau is expected to move back to Washington from Grand Junction, Colo., where it was moved by the Trump administration.

“You need to move that back to D.C. and build it back,” said Joel Clement, a former Interior Department expert in climate change policy who resigned from the agency in protest of the Trump administration policies. “The staff, the budget — all these people who were supposed to work with Congress on these policies were pushed out West, or they left,” he said. “They are hugely demoralized.”

Ms. Haaland is also expected to revisit the Trump administration’s rollback of habitat protections under the Endangered Species Act. Under the Trump rules, it became easier to remove a species from the endangered list, and for the first time, regulators were allowed to conduct economic assessments — for instance, estimating lost revenue from a prohibition on logging in a critical habitat — when deciding whether a species warrants protection.

Such rules led to an exodus of staff, particularly from the Fish and Wildlife Service, Mr. Clement said.

“There’s a rebuilding that needs to happen there,” he said.

The Interior Department also must submit a detailed new plan by June 2022 that lays out how the federal government will manage the vast outer continental shelf off the American coastline, an area rich in marine wilderness and undersea oil and gas resources.

Given Mr. Biden’s pledge to ban new drilling, the new offshore management plan will quite likely reimpose Obama-era policies that barred oil exploration on the entire East and West Coasts of the United States — while possibly going further, by limiting drilling off the coasts of Alaska and in the Gulf of Mexico. But writing the legal, economic and scientific justifications will be difficult.

“They have to get started and really get cracking,” said Jacqueline Savitz, a vice president of Oceana, an environmental group.

As the department moves against offshore drilling, it is expected to help ramp up offshore wind farms. Last week, the agency took a major step toward approving the nation’s first large-scale offshore wind farm, near Martha’s Vineyard, Mass., a project that had been in the works for years.

“This administration is in a position to make large-scale offshore wind a reality for the first time,” Ms. Savitz said. “But the transition in the ocean from offshore fossil fuels to wind farms needs to happen in the next four years, so it’s in place before the next administration.”