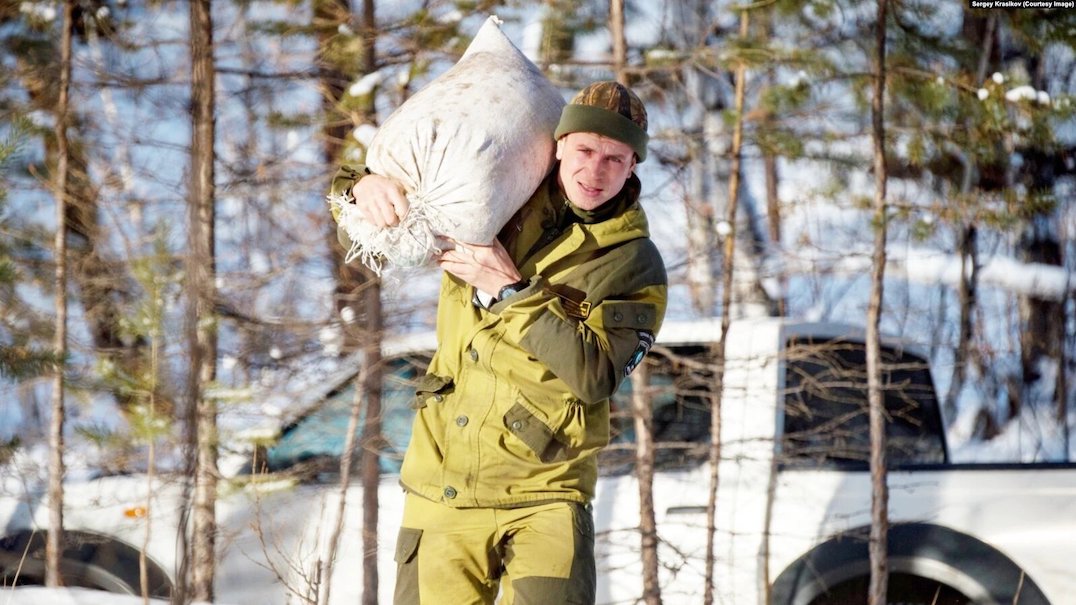 “It was a contest among all rangers under the age of 30,” said one of Sergei’s colleagues at the Altacheisky State Nature Preserve in the Siberian region of Buryatia who asked that his name be withheld. “They looked at everyone’s work in its entirety — how many cases had been filed, how many weapons had been confiscated, how many criminal and administrative cases were sent to the courts. And Sergei took first place in the whole country.”

Now Krasikov is the target of a criminal case on charges that he exceeded his authority during the October 2020 arrest of five alleged poachers in the protected area, which is part of the ecosystem of Russia’s world-famous Lake Baikal.

“I came home from work one evening when I saw something in my mailbox,” Krasikov, 32, told RFE/RL. “It was a letter and that’s how I found out that a criminal case had been opened against me.”

“No one spoke to me,” he continued. “No one even called…. Later, reading the Internet, I learned that I was accused of striking someone with a rifle butt and shooting at someone’s leg. And it was a case from last year when we detained five poachers in the field who tried to run me over with their vehicle while trying to escape.”

Although the case remains under investigation, Krasikov could face up to 10 years in prison if tried and convicted.

Krasikov’s case, observers say, reflects the enormous challenges facing those who have dedicated their lives to protecting Russia’s natural heritage. Rangers across the country face sometimes lethal danger from poachers and others who often turn out to have connections with local police, prosecutors, or politicians.

“Russia’s forests are defenseless,” said Igor Shpilenok, a forest ranger at the Bryansk Forest reserve in western Russia. “We have a poacher mafia that has merged with law enforcement agencies, while those who are genuinely engaged in providing security have no resources or power.”

The political system created by longtime President Vladimir Putin has been described by some analysts as an authoritarian kleptocracy in which the impunity of law enforcement and security personnel fosters corrupt and criminal connections.

The late political scientist Karen Dawisha, in her 2014 book Putin’s Kleptocracy, wrote that “in the 10 years from 2002 to 2012, hundreds of thousands of businessmen were actually imprisoned, not just questioned or arrested, primarily as a result of rivals paying corrupt police, prosecutors, and judges to put away the competition.”

Despite Putin’s personal efforts to portray himself as a friend of nature and a champion of the law, rampant poaching has been one problematic manifestation of such corruption.

In May 2009, Irkutsk region Governor Igor Yesipovsky and three others were killed when their helicopter crashed while they were allegedly using high-powered rifles to illegally hunt bear from the air. In January of the same year, the Kremlin’s envoy to the State Duma, Aleksandr Kosopkin, and six others were killed when their helicopter crashed in the Altai region. Leaked photographs from the scene showed the carcasses of two endangered argali sheep on the ground near the wreckage.

Forest ranger Krasikov has worked in the 78,000-hectare Altacheisky State Nature Preserve for 10 years. His father and brother are also rangers in the reserve, which is home to more than 40 mammal species, including seven that are listed as protected in Russia. The reserve is part of a network of protected areas that form the Baikal State Natural Biosphere Reserve , at the heart of which lies the UNESCO-recognized Lake Baikal.

A Forest Chase At Night

“Rangers like Krasikov in our reserve system can be counted on the fingers of one hand,” said Artur Murzakhanov, deputy director of the Protected Baikal Region state environmental enterprise. “He is one of those people who really loves nature and is ready to lay down his life for it.”

Krasikov’s current ordeal began last autumn when he discovered vehicle tracks inside the protected area near a place where rangers leave forage for wildlife.

“A few days later, a photo trap that we set up sent us an alarm that the car had returned,” he told RFE/RL. “On the night of October 4, my father, my brother, and I set out to try to catch them. The first guy presented no problem. He was alone and at first took us for his friends.”

Soon, Krasikov said, the rangers came upon a car parked in the forest with its lights and engine off. They identified themselves as rangers and called on the people inside the vehicle to exit.

“Immediately, the lights and engine came on,” Krasikov recalled. “The car took off and headed straight for me. I knew that they intended to run me down and escape.”

Krasikov said he fired one shot into the front of the vehicle before diving out of the way.

“Later it turned out that I had broken my wrist and suffered a concussion,” he said. “But there was no time to think about that then. They helped me up and we went after the car.”

The suspects soon realized their car could not move quickly through the dark forest, and they began jumping from the moving vehicle. The rangers were able to quickly round them up. In all, five men were detained and the rangers confiscated weapons and two animal carcasses.

When police arrived on the scene, none of the detainees complained that they had been beaten or shot at. An officer asked one detainee how his forehead had been injured and he said it happened when he jumped from the car.

“No one complained about anything,” Krasikov said.

The detainees gave various explanations for their appearance deep in the protected reserve in the middle of the night. They said they were on the way to the village of Podlopatki to slaughter a bull and that they had stopped in the forest to relieve themselves.

Now, however, investigators say the detainees claim Krasikov jumped in front of their car and fired into the passenger cabin. He then allegedly struck one of the men in the abdomen with the butt of his rifle and fired another shot at the legs of another suspect. The detainee who was struck purportedly suffered a broken rib.

The management of the Baikal reserve told the state news agency TASS that the suspects’ claims were absurd.

“The detained poachers are not peasants who were trying to put food on their tables,” reserve Director Vasily Sutula said. “We believe that powerful protectors from Ulan-Ude stand behind these poachers. We note that they have already changed their story three times in order to create their complaint that they were supposedly shot and beaten.”

‘Tip Of The Iceberg’

“The injustice in Buryatia…is just the tip of an enormous iceberg of injustice,” Bryansk ranger Shpilenok said. “If Sergei had been a National Guard officer or even just a dressed-up Cossack, those poachers would have been sitting in jail that morning. But he was protecting nature instead of protecting the regime.

“But they weren’t throwing snowballs or paper cups at him,” he added, referring to examples of anti-Kremlin protesters who were prosecuted for assaulting police officers for such offenses. “They tried to run him down with a car. His wrist was broken; he had a concussion; he spent a long time in rehabilitation. Now, four months later, the government rewards him with a criminal case.”

Shpilenok added that there was a monument to forest rangers who lost their lives in the line of duty in Siberia’s Sayano-Shushensky Preserve. He noted that the monument was not erected by the government, but by the nongovernmental environmental group Protected Country and the staff of the preserve itself.

Baikal Reserve Director Sutula on March 15 published on Facebook the results of his open-source research on the accused poachers.

According to social-media pages, one of the suspects, Sergei Randin, works for a company called Titan, which is owned by Ulan-Ude municipal lawmaker Vadim Vredny of the ruling United Russia party. Vredny and his wife are Randin’s “friends” on the VK social-media site. Viktor Solntsev, retired police colonel and former deputy head of the Buryatia branch of the Interior Ministry, is also among Randin’s social-media “friends.”

One of the other suspects, Sergei Rusin, who claimed that Krasikov struck him with the butt of his rifle, is married to Randin’s sister, and both Rusin and his wife work for the state savings bank Sberbank.

A third suspect, Vyacheslav Afanasyev, has a private VK page, but it asserts that he graduated from the Eastern Siberian Institute of the Interior Ministry of the Russian Federation in 2011.

“We hope for an objective investigation into this matter, which is why we researched these people, whose testimony has been taken more seriously than that of a ranger of a state nature preserve,” Sutula wrote. “This case has quickly become well-known and has attracted the attention of officials at the federal level, which has increased the odds that it will be resolved objectively. The influential protectors of these poachers had best stand aside.”

None of the alleged poachers responded to requests to comment for this article.

No charges have been filed yet in connection with the incident.