‘It’s cultural genocide’: inside the fight to stop a pipeline on tribal lands

Posted on March 1, 2021 by Viktor Sulyandziga 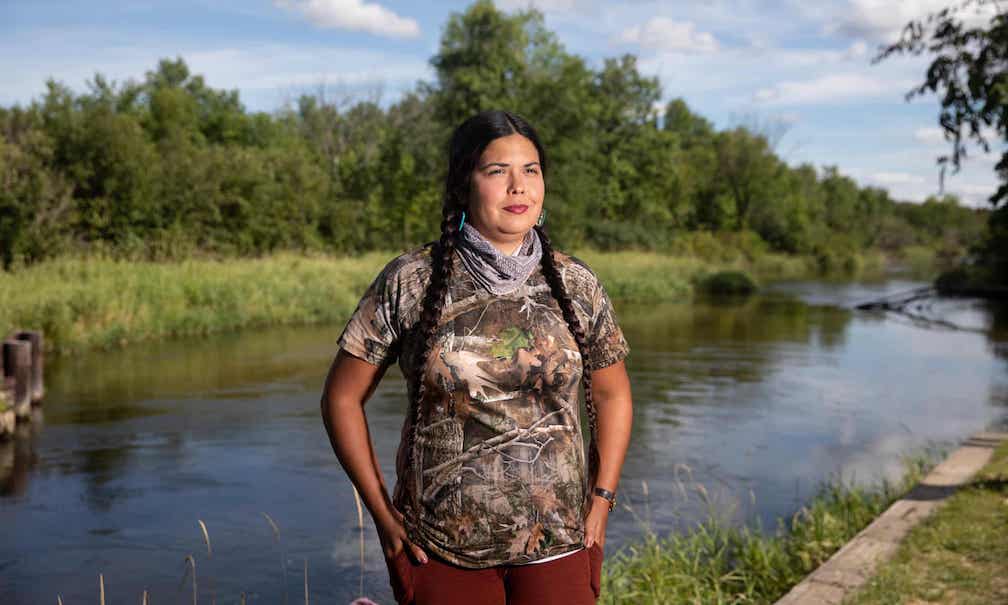 Dressed in a ribbon skirt and mask, Tara Houska gazed down at the trickling waters of the Mississippi near its headwaters. The great American river that eventually flows into the Gulf of Mexico is just a stream in these parts of northern Minnesota.

A pipeline will soon burrow underneath this part of the Mississippi and its surrounding wetlands. It is one of hundreds of water crossings, including wild rice fields, that lie in the path of a new stretch of Line 3, a pipeline bringing nearly 1m barrels of tar sands a day from Alberta, Canada, to Superior, Wisconsin.

But opposition to the pipeline is considerable, andis supported by environmental organizations and activists resisting pipelines such as the Dakota Access pipeline, and Keystone XL – a project that Joe Biden cancelled on his first day in the White House.

The on-the-ground activists are called “water protectors”, who are against the pipeline because of its impact on the climate crisis, oil spills and infringement on Native treaty rights.

There are numerous sites in Minnesota, along the new Line 3 route, where water protectors have set up camp. Much of the route goes through tribal lands, as well as Minnesota’s iron range and areas popular for recreation, including hunting, fishing and people enjoying the outdoors.

It is a lush, wooded part of the state, thick with birch and pine trees, pristine lakes, rolling creeks and lakes filled with wild rice, an agricultural product that is historically significant to the Ojibwe.

Tall grasses poked out of the snow at the spot near the Mississippi headwaters in northern Minnesota, where Houska spoke. “It’s really hard to be in a situation in which we’re looking at this beautiful place and thinking about the fact that our governor has chosen to support or at least tacitly allow a tar sands project, one of the biggest tar sands infrastructure projects in North America,” Houska said. “It’s a perpetuation of cultural genocide.”

A ‘replacement line’ or expansion?

Line 3 is a proposed reroute of a 52-year-old pipeline operated by Enbridge, a Canadian energy corporation based in Alberta. In 2014, after two major oil spills for which Enbridge was responsible, including the largest inland oil spill in US history, the Department of Justice under the Obama administration ordered the replacement line, due to its structural issues. The “replacement” pipeline runs mostly on a completely new route through Minnesota, barreling through hundreds of lakes, rivers, aqueducts and wetlands. It also traverses land that Native American opponents say is protected by US treaties with Ojibwe nations.

For the past three years, Houska, an attorney, has set up camp here with the resistance group Giniw Collective, which she founded. Last week Houska met with the congresswoman Ilhan Omar at the bridge overlooking the river, along with a group of other Native female leaders.

“We need Biden to revoke the water-crossing permit,” Omar told the Guardian. “That is one of the greatest opportunities that can be given to this community.”

Omar sent a letter to Biden calling on him to cancel the permits allowing the pipeline to cross under the river.

Among the objections are that the line will bring an expansion of tar sands, which have higher emissions than other types of crude oil. In addition, opponents say the line is a violation of indigenous territory, as it causes pollution in lands and waters that the Ojibwe were promised to be able to use for ever.

Enbridge calls its $3bn endeavour the Line 3 Replacement Project, claiming the new pipes simply replace existing infrastructure that dates back to the 1960s. But opponents say that it is an expansion not a replacement project, as the majority of the new pipeline in Minnesota takes a different course than the original.

“What I want to say loud and clear is that this is not a replacement line,” said Dawn Goodwin, an Ojibwe advocate from the White Earth reservation, and one of the women who met with Omar at the river. “It’s actually relocation, a whole new project, a whole new corridor.”

The fight against Line 3 evokes a series of treaties signed between the US government and the Ojibwe people, including the treaty of 1837, which explicitly grants the Ojibwe the right to hunt, fish and gather in the lands they gave up, and the 1855 treaty, which in 1999, the supreme court ruled also retains those rights.

More than 100 people have been arrested as they protested against the line in the last month, since construction of the project began, Houska said, but battles are still raging in the courts and between government agencies. In one case, the Minnesota department of commerce claims the utilities regulator should not have sanctioned the project without first evaluating the long-term demand for oil.

But not everyone is against Line 3.

Tim Halberg owns the land on both sides of the river where the pipeline crosses underneath. A research scientist and the proprietor of a land management company, Halberg uses the land to hunt, trap, fish and swim with his family. He grew up four miles north of the crossing, the descendant of Swedish immigrants.

Halberg was approached by Enbridge four or five years ago for permission to use his land for the right of way. He doesn’t see a problem with the pipelines being underground. “The grassland doesn’t get impeded by a pipe in the ground,” he said. “Oil spills are bad, but remember what oil does with water – oil floats. It’s easier to recover.”

Oil pipeline spills are known to happen, like the Kalamazoo oil spill in 2010, in which 1m US gallons of oil flowing through Enbridge’s Line 6B burst into the Kalamazoo River.

Michael Barnes, a spokesperson for Enbridge, said according to the project’s environmental impact statement, Line 3 is unlikely to have much impact on greenhouse gas emissions. “Restored capacity on the replacement line displaces crude oil being delivered today by truck or train, which are more carbon intensive modes of transport,” Barnes said in an email to the Guardian.

Barnes also said that Enbridge has demonstrated “ongoing respect for tribal sovereignty”, pointing to support from the project by both the Leech Lake and the Fond du Lac.

Nancy Beaulieu, an organizer for the environmental group MN350 and a member of the Leech Lake Band of Ojibwe who met with Omar at the headwaters, is unhappy with how some tribal leaders have accepted the project without consulting their members. This includes the Minnesota Chippewa Tribe – an umbrella organization of the Ojibwe tribes with the exception of Red Lake.

“Being stakeholders of the Minnesota Chippewa tribe, we should have prior informed consent, but we have not,” Beaulieu told the Guardian. “Our Minnesota Chippewa tribe constitution has a preamble to conserve and preserve our resources and our land for the wellbeing of our people and our descendants. Line 3 violates our preamble.”

Others including White Earth, Red Lake and most recently Mille Lacs, have fought Enbridge in court. That fight received a blow this week when the Minnesota appeals court denied a request for a stay of construction. Joe Plummer, a tribal attorney representing Red Lake, said the fight was far from over. “This is only a decision on our emergency request to stop construction,” Plummer said. Oral arguments for the case begin in March, and the tribe has a request in the US district court that challenges the army corps of engineers’ approval.

Another place where the pipeline will cross the Mississippi is near Palisade, Minnesota, in Aikin county. Nearby, a water protector camp called the Welcome Center hosts Natives and allies who want to stand up to Enbridge.

One truth-teller at the site is Tania Aubid, an Ojibwe woman who has no time for elected tribal leaders giving away Native land. “They may have been elected into office, but they don’t know anything about the history of their own people,” she said.