Indigenous community wins recognition of its land rights in Panama

Posted on February 17, 2021 by Viktor Sulyandziga 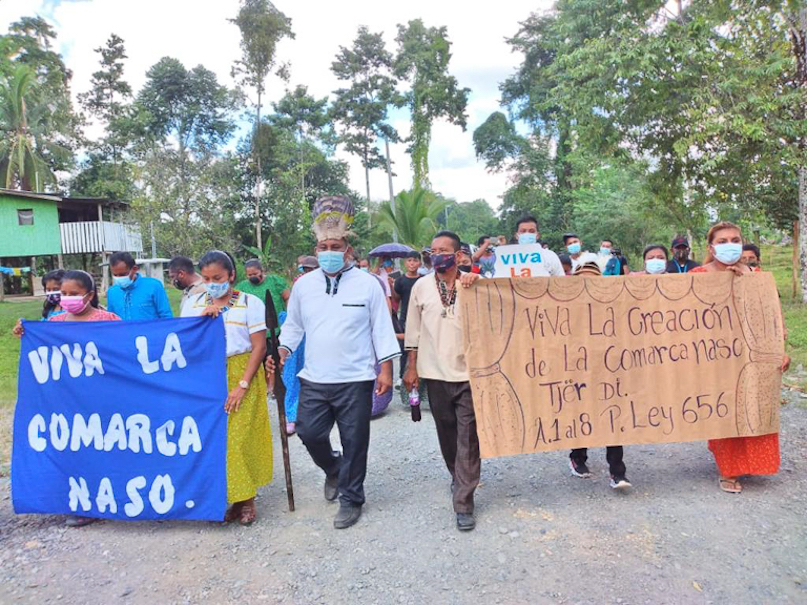 The Naso Tjër Di people of Panama now have a protected territory of their own. The creation of the 1,600-square-kilometer (620-square-mile) comarca, as it’s called in Panama, came as a result of a recent decision by the country’s Supreme Court recognizing the Indigenous nation’s land rights.

The court’s decision rested in part on evidence of the role that Indigenous groups play in protecting the environment in Panama, as has been shown elsewhere on the planet, according to an analysis by the Washington, D.C.-based nonprofit Center for International Environmental Law (CIEL).

Leaders in the Naso community have been working toward the goal of a comarca for decades, seeing it as a bulwark against potentially destructive outside incursions.

“Having that official recognition of their land is so fundamental to their well-being and survival as a group,” Sarah Dorman, a staff attorney with CIEL, told Mongabay.

The Naso nation comprises around 4,000 people living in the rainforests of northern Panama along the Teribe River, territory they have lived in for generations. But even as other Indigenous groups in Panama have been able to secure their own comarcas, the Naso’s claim to the land remained unrecognized by the government.

Change appeared to be coming in 2018, when Panama’s National Assembly passed a law to establish the Naso Tjër Di Comarca. Shortly after the vote on the legislation, though, then-President Juan Carlos Varela vetoed it. He said the comarca would overlap with two protected areas designated in the mid-2000s: La Amistad International Park and Palo Seco Protected Forest, both UNESCO World Heritage Sites. As a result, he argued, the legislation creating the comarca was “inconvenient,” “unenforceable” and unconstitutional.

In response, the legislature overrode Varela’s veto, triggering a review of the matter by the Panamanian Supreme Court. The court rejected Varela’s arguments on Nov. 12, 2020, ruling that the Constitution required that the government secure continued collective access for Panama’s Indigenous people to their ancestral lands.

The ruling notes that “the Indigenous population has preserved the environment in the places where they have settled, because they are bearers of ancient knowledge about biodiversity, plants, animals, water, and climate that allows for the sustainable use of the resources available to them,” according to a translation from CIEL.

In another “key reference,” according to Dorman, the court’s members also wrote that Indigenous “laws, customs, and traditional practices reflect both an attachment to the land and the responsibility to conserve it for the use of future generations.”

In a statement following the ruling, the NGO Rainforest Foundation US said its analysis found that less deforestation had occurred on Naso lands than in the Palo Seco Protected Forest.

“As the court says itself, Indigenous peoples are among the best protectors of the environment,” CIEL’s Dorman said.

The court’s decision extended the thrust of a legal memo issued by the Panamanian Ministry of Environment in 2019, saying that protected areas weren’t an impediment to Indigenous land titling.

The Naso Tjër Di Comarca became official on Dec. 4, 2020, when Panama’s current president, Laurentino Cortizo Cohen, went to the town of Sieyik, where the Naso’s king resides, to sign the legislation. In a speech, Cortizo Cohen said the overlap between the comarca and the protected areas would ensure that the forests in the area would be doubly protected, according to a government statement.

Dorman said the recognition of the Naso’s territory is “huge” from a legal perspective. But she also said that more remained to be done to secure their forests.

CIEL works closely with the Ngäbe and Buglé Indigenous peoples in Panama, and these groups achieved a joint comarca in 1997. Dorman said that once a comarca is formed, the law requires demarcating the boundaries between a comarca and adjacent areas within two years.

“That has not been finished to this day,” she said.

In the years since, Ngäbe and Buglé community leaders say they’ve been sidelined for development projects, most recently the construction of a power transmission line through their territory that they worry will force them from their homes.

The Naso have faced their own spate of development projects affecting their lands and fissuring their community. After years of construction on a tributary of the Teribe River, the Bonyik hydroelectric dam came online in 2014, and its social impacts reportedly rippled through Naso communities, according to a World Bank investigation as well as a 2014 report by James Anaya, then the U.N. Special Rapporteur on the Rights of Indigenous Peoples. The dam also lies within the boundaries of the Palo Seco Protected Forest. In fact, human rights groups and Indigenous communities have expressed concern that such protected areas may in fact be a tool to dispossess Indigenous groups like the Naso of their lands to pave the way for lucrative development projects.

Today, the Naso have recognition of their land rights, predicated on their ancestral claims and backed by evidence that shows the group’s superlative environmental stewardship. But until the borders are established, they are still vulnerable from a legal standpoint, Dorman said.

“If your land is not delineated completely,” she said, “it’s just so much harder to legally defend against these outside encroachments.”