Joe Biden: ‘Tribal sovereignty will be a cornerstone’

Posted on January 28, 2021 by Viktor Sulyandziga 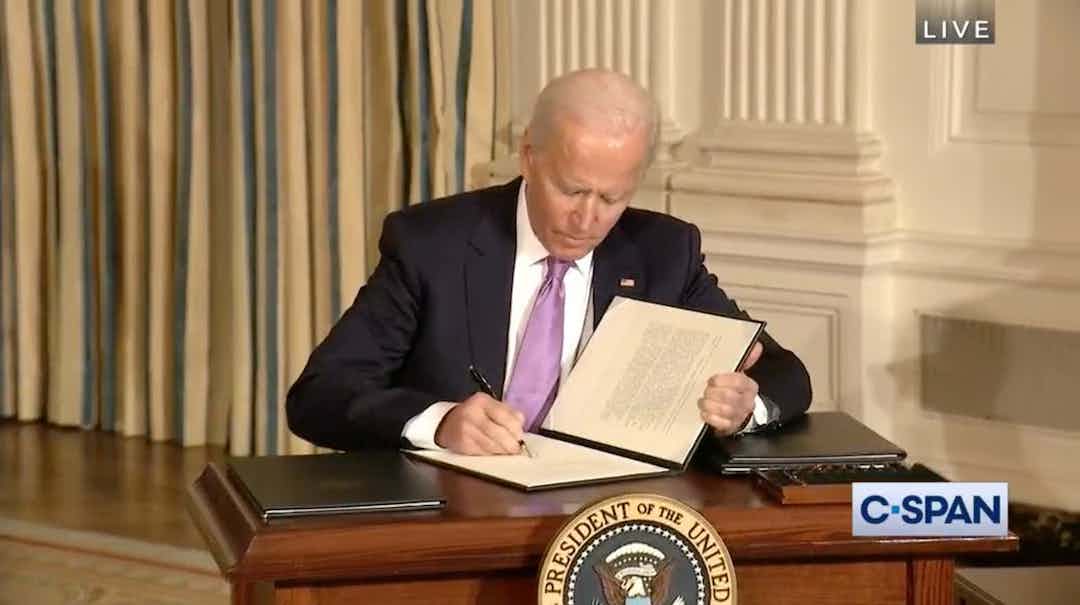 The third of four executive orders signed by President Joe Biden on Tuesday focuses on strengthening the nation-to-nation relationships with tribes. It’s only one presidential action of many taken by the administration in week one.

Biden signed a presidential memorandum that requires all federal agencies and executive departments to have a “strong process in place for tribal consultation,” said Libby Washburn, Chickasaw and the newly appointed special assistant to the president for Native American Affairs for the White House Domestic Policy Council. The position previously was held by Kim Teehee, Cherokee, and Jodi Archambault, Hunkpapa and Oglala Lakota, in the Obama Administration.

The move represents the new president “committing to regular, meaningful robust consultation with tribal leaders” and it requires all federal agencies and executive departments to have a “strong process in place for tribal consultation,” Washburn said.

“Today I’m directing the federal agency to reinvigorate the consultation process with Indian tribes,” Biden said, noting respect for sovereignty “will be a cornerstone of our engaging with Native American communities.”

Washburn said previous presidents like Barack Obama and Bill Clinton have done this.

So what makes this one different?

This time around the executive order requires the head of each agency to submit, within 90 days, a memorandum with a detailed plan of action on how they will implement policies and directives, Washburn said. Agencies must listen to what tribes want.

These federal agencies and executive departments will have to continuously keep the White House updated, she said.

Tribal consultation is also crucial when it comes to the pandemic.

“This builds on the work we did last week to expand tribes’ access to the Strategic National Stockpile for the first time, to ensure they receive help from the Federal Emergency Management Agency, FEMA, to fight this pandemic,” Biden stated Tuesday.

On Jan. 21, Biden announced that FEMA would make financial assistance available to tribal governments at 100 percent of the federal cost share.

When the COVID-19 pandemic was declared a national emergency, it activated eligible tribal, state and local governments to access FEMA emergency funding, Washburn said. The federal cost share was 75 percent, and tribes were responsible for 25 percent of the cost.

“It has been something the tribes have been asking for, for a long time, and there has been legislation pending in the House and Senate on it,” Washburn said.

Another ask by the tribes: access to the Strategic National Stockpile. And granted by the administration on Jan. 21.

Fawn Sharp, Quinault, president of the National Congress of American Indians, said the administration’s first week demonstrated that the needs of tribal nations are a priority.

“I am both excited and encouraged that the Biden Administration is taking so many meaningful and significant steps towards Tribal Nations’ priority issues — respect for sovereignty, racial equity, urgent action on climate change, protection of sacred sites and ancestral ecosystems, and the commitment to meaningful Tribal consultation,” she said. “There’s immense work still to be done, but we celebrate that the first steps President Biden has taken towards truth and reconciliation with Tribal Nations are so responsive to our needs and aligned with our values and principles.”

Since Day One, the Biden administration has gone full speed on taking presidential actions that affect tribal nations.

Hours after taking his oath, Biden revoked the permit for the Keystone XL pipeline, placed a temporary moratorium on all oil and gas activities in the Arctic National Wildlife Refuge, and signed another executive order on “advancing racial equity and support for underserved communities through the federal government.”

“I think it’s exciting and it shows that things are going to be front and center for him and his entire administration,” Washburn said, adding that includes hiring more Native people across the board.

In addition to New Mexico Rep. Deb Haaland’s nomination for Interior secretary, Washburn said, “President Biden, he promised during the campaign that tribes would have a seat at the table at the highest levels of federal government and a voice throughout the government, and I think that he’s really showing in the early beginning days of his administration that he is going to make sure that happens.”

And down to what is in the Oval Office. Washburn pointed out that a painting of Andrew Jackson, a strong proponent of Indian removal, was removed from the Oval Office. The “Swift Messenger” sculpture by Allan Houser, Chiricahua Apache, now sits on a bookcase, reported the Albuquerque Journal.

As for land acknowledgements, that’s an ongoing conversation.