Reconstruction of the Mo5ol-Uraha of the Sakha People of Siberia

Posted on December 14, 2020 by Viktor Sulyandziga 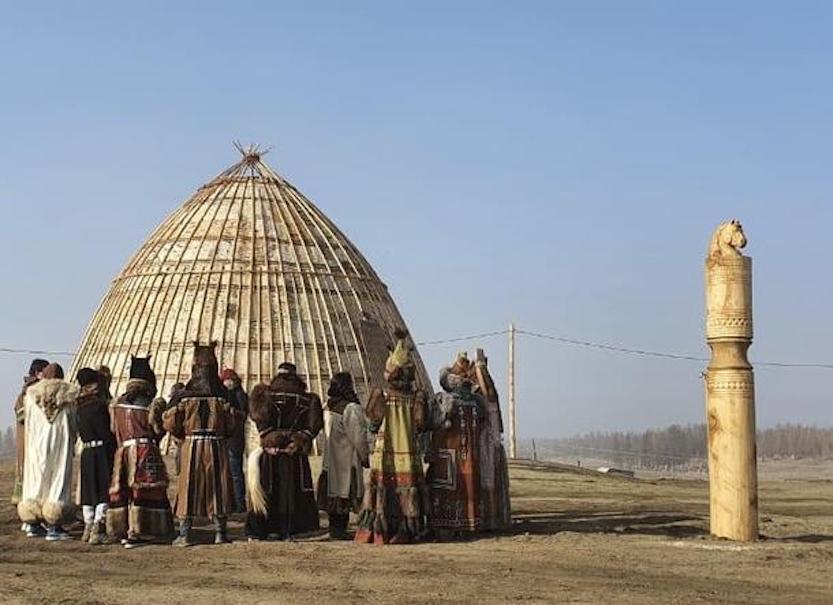 When ethnologist Waldemar Jochelson made his collection of Sakha (Yakut) material culture for AMNH, he noted that “The conical summer dwelling of the old-time Yakut (Mo5ol-Uraha), made of ornamental birch bark, all parts of which I was able to bring back, is no longer in use.”  Apart from the AMNH Mo5ol-Uraha, only individual parts can be found in archaeological sites and scattered in various museums worldwide. Sakha craftsmen have long desired to reconstruct the Sakha uraha in its original historical form. In 2017, a memorandum of understanding between the Design Studio “Uran,” Republic of Sakha (Yakutia) and the AMNH enabled representatives of “Uran”, including director Vyacheslav Yaroyev, to visit AMNH and study the uraha parts that Jochelson collected more than a hundred years ago as well as written records, photographs, and other related materials preserved in the museum’s storerooms and archives. The dream of erecting a new ceremonial Uraha began to become a reality.

AMNH Associate, Vera Solovyeva describes how “The reconstruction of our ancestors’ Mo5ol-Uraha began three years ago with the participation of traditional master craftsmen from all over the Republic of Sakha who had been making and decorating birch bark covers with mica and horsehair, weaving horsehair belts and ropes, and carving ornaments on vertical piles based on historical artifacts.”  She describes how the structure of the Mo5ol-Uraha mirrors the three-part world of the Sakha people, the birchbark panels decorated with plant patterns protectively encircle the round bosom of the earth or Lower World, the fame of pillars bound by a hoop and decorated with dangling ornaments represents the Middle World, and the uppermost girdle represents the sky or Upper World.

The new Mo5ol-Uraha opened to the public on Sakha Republic Day, September 27, 2020, the first such elaborate Urahato be erected in 200 years. It is dedicated to the outstanding keeper of Sakha traditions, the famous blacksmith, Boris Fedorovich Neustroev – Mandar Uus who is respected throughout the Sakha Republic and stands on his homeland – the Taatta ulus.