Rivers for Recovery: Protecting Rivers and Rights Essential for a Just and Green Recovery

Posted on December 9, 2020 by Viktor Sulyandziga 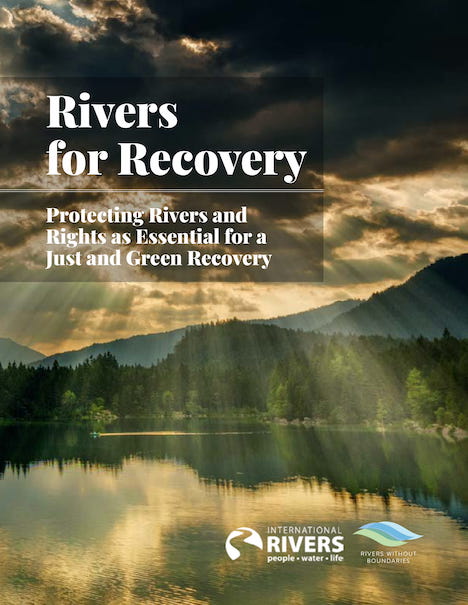 On the 20th Anniversary of the landmark World Commission on Dams Report, a new report from International Rivers and Rivers without Boundaries charts an alternative course for post-pandemic energy development than the revitalization of a failing hydropower industry. As Rivers for Recoverydetails, despite the rhetoric of the hydropower industry, the industry’s global flagship projects continue to prove poor investments. This in addition to destroying critical ecosystems and biodiversity, while devastating local populations, human rights, and food security.

For years, the installation of new hydropower facilities has steadily declined as renewables have rapidly increased. This is a result of a confluence of factors including the growing cost-efficacy of alternatives (especially solar and wind), the lengthy timelines and burdensome costs (social, environmental, and economic) of large dams, a worsening climate crisis, technological innovations in energy efficiency, storage, and transmission, and a growing global movement to keep or return rivers to their natural state. Indeed Cambodia recently announced a 10-year moratorium on Mekong mainstream dams and U.S. governors announced the world’s largest dam removal project will proceed.

Yet, the International Hydropower Association (IHA), far from shifting course, is urging its members to “have shovel-ready projects in place for the post-Covid 19 economic stimulus plans.” In other words, the hydropower industry is seeing the pandemic as an opportunity to profit from recovery funds that would be much better spent elsewhere, including upgrading and improving the efficiency of existing dams.

“The hydro industry is in the business of self-preservation. But humanity’s self-preservation needs to prevail,” said Darryl Knudsen, executive director of International Rivers. “Given the track record and problems inherent in large-scale hydropower, we should be rushing toward alternatives, not channeling money into false solutions.” The report’s survey of major projects that came online immediately prior to the pandemic includes:

The Belo Monte Dam in the Brazilian Amazon.

The project had a pricetag of $10 billion, was fraught with corruption scandals, devastated Indigenous territories and way of life, displaced thousands of families, and harmed critical biodiversity in the globally sensitive Amazon rainforest. What’s more, the project will only deliver a fraction of the 11 gigawatt (GW) capacity it promised. Yet the IHA heralds it as a major success.

These recent additions to the series of dams on the Lancang, or Upper Mekong River, in addition to the new Xayaburi and Don Sahong Dams in Laos, have contributed to an unfolding ecological disaster downstream in the Lower Mekong Basin that threatens the world’s largest freshwater fishery and the collapse of the region’s “food bowl.”

Finally commissioned after nine years of construction, the dam will restrict flows in such a way that Somalia’s agricultural production and food security could be seriously impaired.

Rivers for Recovery provides an indicative list of destructive projects that are yet in the pipeline but could be stopped with forward-thinking on cheaper, cleaner options by governments; a chance to avoid crippling new debt in the post-pandemic recession. It also provides a detailed roadmap that not only calls for a moratorium on new dams in the economic recovery, but investments in alternatives and increasing efficiency of current dams, and commitments to protect critical biodiversity and the world’s remaining, free-flowing rivers.

What’s more, the report’s findings affirm much of what the World Commission on Dams laid out twenty years ago. The Commission, a multi-stakeholder group from civil society, the private sector, academia, and beyond, examined the environmental, social, and economic impacts of large dams around the globe. And their final report, Dams and Development: A New Framework for Decision–Making, released in November 2000 under the patronage of Nelson Mandela, provided a comprehensive framework for alleviating the competing pressures on our scarce freshwater resources. Globally, rivers and the communities that depend on them remain threatened. And the fight against destructive, expensive, unprofitable dams continues. The Commission’s recommendations remain an important foundation for further innovations as we seek to rebuild economies from the pandemic.

← Conservation International’s star-studded advertising campaign remembers to save the rainforests, but forgets Indigenous Peoples
Commissioner for Human Rights calls on the State Duma to refrain from adopting legislation which violates the rights of NGOs and civil society activists →