Posted on November 26, 2020 by Viktor Sulyandziga 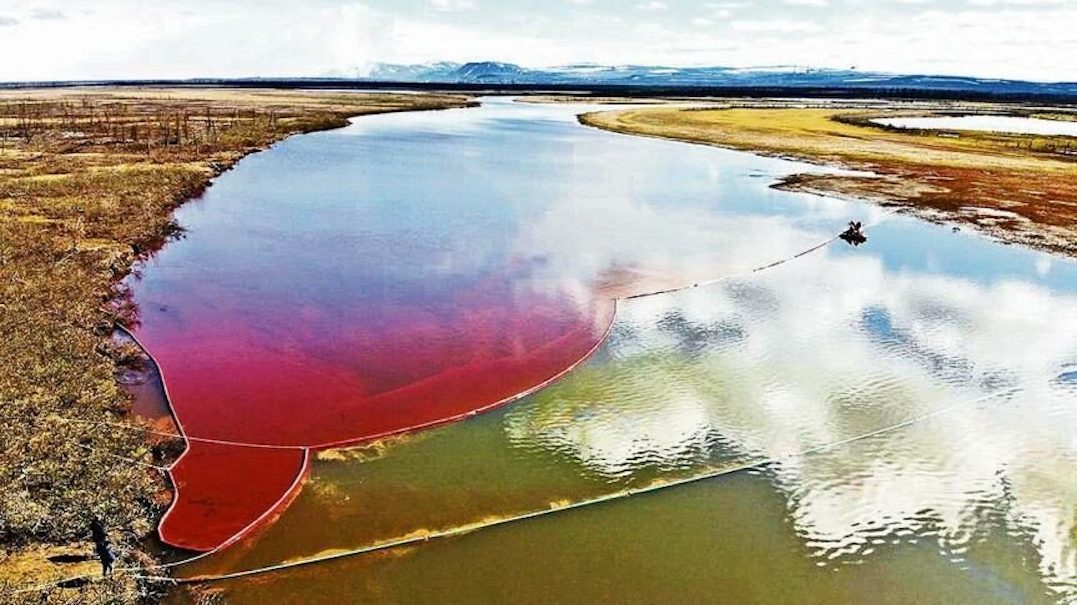 Russia’s technical oversight agency has said that last summer’s massive spill of diesel fuel into the waters of northern Siberia, which was widely blamed on melting permafrost, was instead caused by a poorly maintained reservoir riddled with technical faults.

The reservoir, owned by a subsidiary of the giant Norilsk Nickel, gave way on May 29, spilling 150,000 barrels – or 20,000 tons – of fuel, sullying the Ambarnaya River near the city of Norilsk and constituting one of the worst industrial accidents ever to take place in the Arctic environment.

Vladimir Putin declared a state of emergency and Russia’s Prosecutor General’s Office launched a wide-reaching investigation of industrial sites located in Russia’s sprawling permafrost environment to check for weaknesses due to melting. At the time, Norilsk Nickel’s chief executive, Vladimir Potanin, suggested that thawing tundra was the most likely culprit in the spill.

But the report released this week by Rostekhnadzor cited faulty construction of the collapsed tank and the poor maintenance practices followed by its owner, the Norilsk-Taimyr Energy Company, or NTEK, run by Norilsk Nickel.

Primary in Rostekhnadzor’s conclusions was that foundations under pilings holding up the reservoir weren’t strong enough to support the fuel tank. The agency also blamed NTEK for not performing required maintenance. Rostekhnadzor based its findings on interviews with employees, technical documentation and numerous visits to the site of the accident, the agency’s report said.

Rostekhnadzor’s findings are in line with what many Russian environmentalists had suspected in the aftermath of the accident. Speaking in June during a Bellona-hosted live-stream discussion on Instagram, Alexei Knizhnikov of the Russian branch of the World Wildlife Fund, said the condition of the ruptured tank made the accident predictable.

“This accident could have been prevented,” he said. “The cause of the accident was a completely outdated tank, which is not even visually monitored by environmental safety systems”

Indeed, an investigation by Novaya Gazeta, a respected independent newspaper in Russia, found that the poor state of the tank had been known to officials at Norilsk Nickel as far back as 2016, when the company considered replacing them.

Still, environmentalists and many in the Russian government agree that thawing tundra caused by dramatic temperature rises in the Arctic region poses major threats to extensive Russian infrastructure. Last year, the Arctic experienced its warmest winter on record.  That was followed in April and May by a heat wave, with May seeing temperatures between 3 degrees Celsius and 6 degrees Celsius above average since January. More recently, vast portions of Arctic oceans that usually freeze over by this time of year have not.

Meanwhile, some 65 percent of Russia’s landmass is covered by a pack of soil and ice that, until recently, has remained permanently frozen. According to Rosgidromet, Russia’s federal weather service, these spiking temperatures are causing permafrost to thaw in certain areas, a trend the agency says puts some $300 billion worth of buildings and infrastructure at risk.

Among that infrastructure are more than 75,000 kilometers of oil pipelines stitched across Siberia, which the agency said could become vulnerable to ruptures as the frozen soil beneath them begins to retreat.

Also included are entire industrial mining, gas and oil centers – as well as the highways and railways that lead to them and towns that have sprung up around them. In Norilsk alone, said the agency, permafrost has retreated by 22 percent.

The newly unstable ground is already taking its toll. Over the past 10 years, said the report, more buildings in Norilsk have collapsed because of subsidence than in the previous half century.

Arctic melt only contributes to climate change. As permafrost thaws, it releases vast stores of carbon dioxide – the gas most responsible for global warming – which drives up temperatures even more.

According to the Arctic Report Card 2019, a study conducted by the National Oceanic and Atmospheric Administration in the United States, the permafrost environments of Siberia, Alaska, Greenland and Canada are thought to contain as much as 1,460 to 1,600 billion metric tons of organic carbon, which converts to carbon dioxide as it thaws.

The report states that, because of this melting process, the Arctic is now contributing some 1.1 billion to 2.2 billion metric tons of carbon dioxide annually to the world’s atmosphere. That’s equal to the yearly carbon contribution of countries like Japan, on the lower end, and to Russia itself, on the higher end.