Posted on November 24, 2020 by Viktor Sulyandziga 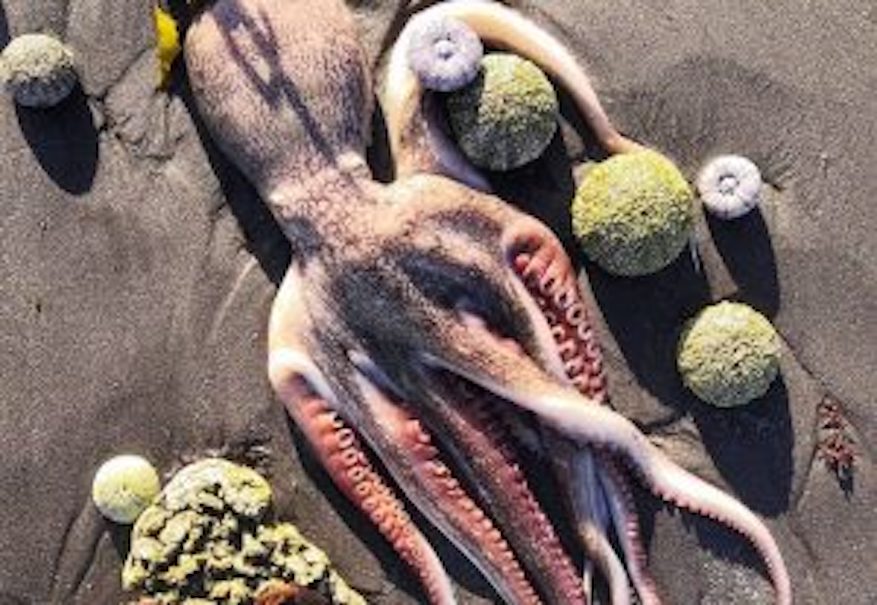 Scientists have determined that a mysterious die-off of marine animals off the coast of Kamchatka in Russia’s Far East earlier this month was caused by a harmful algae bloom, officially laying to rest theories that a manmade chemical spill was to blame, Russian media have reported.

The comments, reported in RBC and other wire services, come from Andrei Adiyanov, vice president of the Russian Academy of Sciences, who said that thousands of water samples pointed to toxins from a particular single-celled organism called a dinoflagellate.

“We can say that the mass death of benthic aquatic organisms occurred as a result of exposure to toxins from a complex of species of the genus Karenia, a representative of dinoflagellates,” he was quoted as saying.

The announcement comes after weeks of uncertainty during which masses of dead sea creatures washed up on local beaches, driven by a foul smelling and murky tide. The grizzly finds, first reported by surfers Kamchatka, seven time zones to Moscow’s east, exploded across social media platforms as local residents documented their discoveries and demanded accountability.

Early investigations by environmentalists cited high petroleum levels and other pollutants in the water. Local officials also suspected the mass animal die off might be tied to leaks of highly toxic rocket fuel, which is bunkered at a number of Far Eastern military facilities, often in shabby conditions.

The new findings from the Russian Academy of Sciences, however, dismisses those theories, after scientists with the organization observed large appearances of phytoplankton, some several hundred kilometers wide, massing off Kamchatka’s coast.

According to Mikhail Kirpichnikov, head of Moscow State University’s department of bioengineering, and a member of the academy, groupings of plankton were observed drifting northward toward Chukotka before shifting direction to the south to the shores of Kamchatka. It was these microscopic organisms that fed the harmful algae bloom, he said.

Harmful algae blooms occur when colonies of algae— which are simple plants that live in the sea and freshwater — grow out of control, pro ducing toxic or harmful effects on people, fish, shellfish, marine mammals, and birds.

While there are many factors that may contribute to these blooms, how these factors come together to create a bloom of algae is not well understood. Studies indicate that many algal species flourish when water circulation is low and water temperatures are high.

The blooms can last from a few days to many months. After a bloom dies, the microbes which decompose the dead algae use up more oxygen, which can lead to die offs of fish and other marine organisms. When these zones of depleted oxygen cover a large area for an extended period of time, they are referred to as dead zones, where neither fish nor plants are able to survive.

Harmful algae blooms have been increasing in size and frequency worldwide, a factor that many scientists attribute to climate change.

Should this be the case, then the mass marine die off that has gripped Kamchatka since late September is only the latest disaster Russia can attribute to warming global temperatures. n May, near the northern Siberian city of Norilsk, a fuel tank resting on thawing permafrost collapsed, spilling 20,000 of diesel oil into area waterways and causing a local river to run crimson.

Svetlana Radionova, a representative of the Kamchatka division of Rosprirodnazor, Russia’s environmental oversight agency, also cast doubt on pollutants being the cause of the mass sea animal die off.

To date, we have conducted almost five thousand studies, taken hundreds of samples, and all these studies indicate that we do not see a pronounced man-made impact on the habitat of aquatic organisms,” she said, according to Russian media.

Alexei Ozerov, director of the Institute of Volcanology and Seismology at the Far East Branch of the Russian Academy of Sciences, said studies on the harmful algae bloom will continue.

“Next, one of the main tasks is to conduct sea expeditions and figure out what can bring these algae into such an active state that we have these blooms,” he said.

← How far can President-elect Joe Biden go to salvage US climate efforts?
Russia’s technical agency says melting permafrost did not cause summer oil spill in Arctic →