Posted on November 7, 2020 by Viktor Sulyandziga 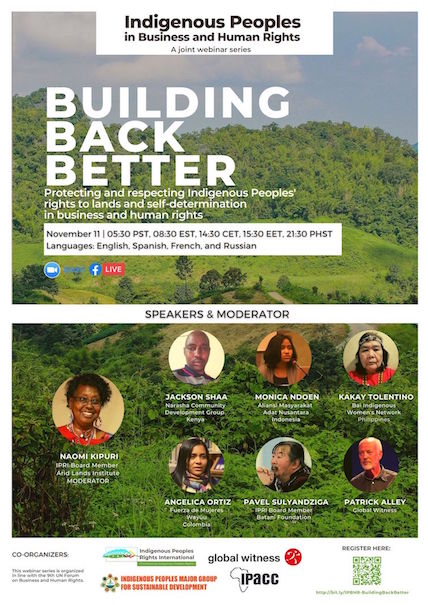 Almost nine months since COVID-19 swept the world, its impacts have proven to go beyond a health crisis. Among others, the threat of a global economic crisis is already manifesting itself. Human rights and environmental organisations have called for governments and businesses to “build back better” an economic system that will depart from the unsustainable and inequitable “business-as-usual” approach, which too often leads to violation of indigenous peoples’ rights to their lands, territories and resources, including their free, prior and informed consent (FPIC). But several governments have recently been fast-tracking bills as stimulus to the economic downturn that see rollbacks in environmental and human rights standards. Among them are Indonesia’s Omnibus Bill, Canada’s Quebec Bill 61 and Ontario’s Bill 197 also known as Covid-19 Economic Recovery Act, and India’s directive to open commercial mining to national and overseas private investors. All these bills are particularly worrying for indigenous peoples as most of them pose threats to indigenous peoples’ rights to FPIC and are primarily rested on exploitation of lands and natural resources, which are often within indigenous territories.

Also, the measures to manage the pandemic, particularly restrictions on mobility and public gathering, have been taken advantage of by governments to impose and implement oppressive laws and policies. Often, these directives have been more effective in curbing the rights to freedom of expression, assembly and privacy, than the spread of the virus. Similarly, some companies, with State support, have taken the opportunity of the restrictions on mobility to expand land areas under their control through land grabbing and violent displacement. This has led to increased incidents of criminalisation and attacks on indigenous peoples at the time of COVID-19. Indigenous Peoples Rights International (IPRI) have documented, from January to July 2020, 83 incidents of killing and hundreds of human rights violations on indigenous peoples, including their collective rights to their lands, territories and resources.

In this context, the webinar aims to:

Jackson M. Shaa is the Executive Director Narasha Community Development Group and Principal Enariboo Primary School in Kenya. He has led NCDG to defend the rights of indigenous people in Naivasha Kenya, having represented the organization in engaging with the national and county governments, the international financial institutions and National and international civil society forums. He took part in a number of research on indigenous people and geothermal exploration in Kenya, impact of climate change and it’s impacts. On academic, he hold a masters of education from the University of Nairobi. He participated in indigenous law training at the University of Pretoria in South Africa.

Kakay Tolentino is an indigenous Dumagat woman of Sierra Madre, the longest mountain range in the Philippines. She has been doing community organising with her community and other indigenous communities in the Philippines since the 1980s. She is currently the national coordinator of Bai Indigenous Women’s Network, which is composed of 11 local indigenous women organizations. She is also the spokesperson of the No to Kaliwa-Kanan-Laiban Dam Network. She was the acting Secretary-General of the KATRIBU Partylist from 2011-2013 and is now a member of the National Council of Leaders of KATRIBU, the National Alliance of Indigenous Peoples organization in the Philippines.

Patrick co-founded Global Witness in 1995. Since then Global Witness has become a global leader in its field, described by Aryeh Neier, former President of the Open Society Foundations, thus: “Global Witness brings together the issues of human rights, corruption, the trade in natural resources, the role of banks, the arms trade, conflict. It is the only organisation that does this. Period.”Patrick has taken part in over fifty field investigations in South East Asia, Africa and Europe and in subsequent advocacy activities. Patrick conceived several of Global Witness’ campaigns and focuses on corruption, conflict resources, forests and land, and environmental defenders. He is a board director of Global Witness and is involved in the organisation’s strategic leadership.Alongside his two co-founders, Patrick received the 2014 Skoll Award for Social Entrepreneurship.Patrick is also a trustee of the OpenCorporates Trust Limited.

Pavel Sulyandziga (PhD in Economics) is Chairperson of the Board of the International Development Fund of Indigenous Peoples in Russia (BATANI) and is currently a Visiting Scholar at Dartmouth College (US). He was a member of the Civic Chamber of the Russian Federation (2006 – 2014) and advisor to the president of RAIPON (Russian Association of Indigenous Peoples of the North, Siberia and the Far East). At the beginning of his career he was a school teacher of mathematics in Primorskiy kray, Russia (1984-1987). In 1991 he was elected as Chairman of the Indigenous Peoples Association of the Primorskiy kray. His international activity included participating in the Eurasian Club (Japan) on assistance to the education and preservation of culture of indigenous peoples (1991-1993); and visiting Indian reservations in the USA (California, Oregon, Washington) to study their experience on education, culture and self-governance (1993). From 1993 to 1994, Mr. Sulyandziga participated in the elaboration of a project on the preservation of biodiversity in the Bikin river valley, where he was responsible for project implementation. In 1994-1995 he participated in the project «Traditional Indigenous Crafts» funded by the Eurasian Club (Japan); he was Indigenous curator of the cooperative project on the preservation of the Ussuri Tiger; and in 1997-2000 he was coordinator of the Danish-Greenlandic Initiative for assistance to indigenous peoples of Russia. In addition, Mr. Sulyandziga was a councilor to the Governor of the Primorskiy kray on indigenous issues (1994-1997). In 1997 he was elected Vice-president and then in 2001 First Vice-president of RAIPON. From 2005 to 2010 he was a member of the United Nations Permanent Forum on Indigenous Issues.

Naomi is the chairperson of the Task Force involved in County/community issues relating to documentation of historical and cultural institutions and other significant matters including establishment of a museum and cultural centre for the County Government of Kajiado. She is the founder of Arid Lands Institute concerned with promoting sustainable utilization of land, raising awareness on environmental protection and conservation and promoting resource tenure security; advocating for human rights of underserved indigenous communities; raising awareness and support gender equity in access, control and ownership of productive resources; and encouraging and promoting production and documentation of historical, cultural and human interest material of historical significance.