Posted on October 17, 2020 by Viktor Sulyandziga 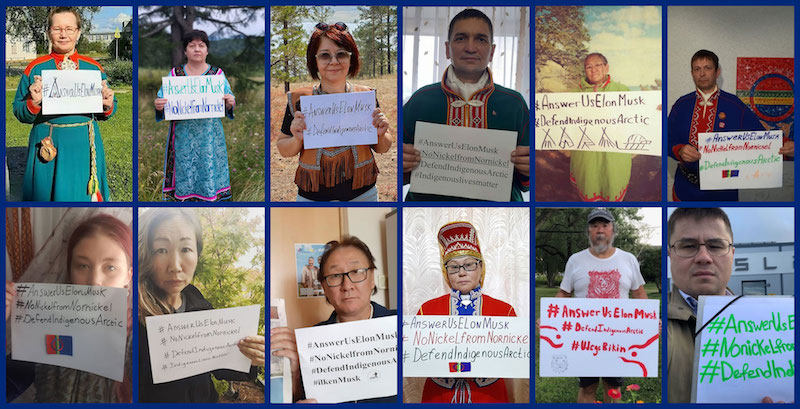 Across the Russian Arctic, indigenous peoples are asking Elon Musk not to buy nickel from Norilsk Nickel, one of the largest nickel and palladium mining companies in the world. For the past three months, they have been holding a media campaign trying to draw attention to the company’s environmental practices and lack of compliance with international law.

Musk, the CEO of US electric vehicle and clean energy company Tesla, addressed the world mining industry this July, saying: “Tesla will give you a giant contract, for a long period of time, if you mine nickel efficiently and in an environmentally sensitive way.” Indigenous peoples of the Russian North raised the alarm, stressing that the country’s nickel plants are not environmentally sustainable and are damaging the fragile Arctic environment. Their campaign consists not only of the customary open letters, but also online flash mobs on social media: indigenous people share their own photos where they, in traditional clothes, hold posters with hashtags ‘#AnswerUsElonMusk’, ‘#NoNickelfromNornickel, and #DefendIndigenousArctic.

In Russia, this is an unusual take on environmental rights: Using Musk’s media persona, indigenous people are addressing their complaints about pollution not to the state but to a foreign industrialist, in an attempt to compel Russia to comply with their legal demands.

Be that as it may, their approach actually makes a lot of sense, says Dmitry Berezhkov, an indigenous rights activist and member of the Russian Aborigen Forum, one of several groups supporting the campaign. “We consider environmental well-being as a part of indigenous people rights. The number of ways to defend the indigenous people rights in Russia is reducing day by day, as the state together with industrial companies try to impose more control on people lives. Theoretically, indigenous people could defend their rights with the help of international organisations, appealing to international law and calling for United Nations resolutions first. But Russia stopped paying much attention to UN resolutions some time ago. Now, there are only two working solutions: European Court of Human Rights and the Council of Europe. That’s why we are trying to be inventive and find new ways to defend our rights. In this case, by organising international media campaigns”, Berezhkov, who is based in Tromsø, Norway, told GV in a phone interview.

Taking on Norilsk Nickel is no small feat. The company, also known as NorNickel, was established in the 1930s by the Soviet state as one of its great ‘tundra conquering’ projects. In the 1990s, the company was privatised by various means — including the notorious ‘loans for shares’ scheme — and today it is majority-controlled by the Russian oligarch Vladimir Potanin, one of the richest people in the country. The company’s operations focus on two areas, both in the Russian Arctic: the Taymyr Peninsula, through its main plant in the nearby city of Norilsk, and the Murmansk region (or more specifically, the Kola Peninsula) on the very western border of Russia, where three smaller plants are located in the towns of Nickel, Monchegorsk and Zapolyarny. All these territories are also traditional homelands for indigenous peoples: the Dolgan people in the Taymyr Peninsula and the Sámi people in Murmansk Region.

On May 29, NorNickel made headlines for causing one of the worst environmental disasters in the Rusian Arctic. A corroded fuel storage tank belonging to a local power station owned by NorNickel burst open, flooding local rivers with up to 17,500 tonnes of diesel fuel which melted ice and contaminated the water. It eventually reached Lake Pyasino and the linked rivers, making its way into the Arctic Ocean. All in all, it contaminated at least 140 square miles across the Russian Arctic. The spill brought an unusual level of public attention to NorNickel: On June 4, Russian President Vladimir Putin declared a state of emergency and personally criticised Potanin on television.

On September 18, Lake Pyasino was declared “dead” as a result of the spill. Ecological monitoring results demonstrated that, alongside diesel fuel, the MAC (Maximum Allowed Concentrations) of heavy metals in the lake waters had been exceeded. That same day Elena Penzina, a Deputy of the Legislative Assembly of Krasnoyarsk Region, wrote on her personal Telegram channel that the level of concentration of pollutants in the water indicate that NorNickel had been contaminating the lake for many years. The toxic gases and heavy metal particles had also contaminated the air, she added.

Yet even after the spill, the state agency PORA (Project Office for the Development of the Arctic) ranked NorNickel third among Russian companies operating in the Arctic and seventh among international companies in their “Polar Index”, a directory of the most environmentally sustainable Russian companies.

The Dolgan people largely live along the shores of this lake and the rivers which feed it. Gennady Shchukin is a veteran Dolgan activist who has attempted to draw attention to environmental disaster and the violation of indigenous people’s rights for many years. Today, he is the chairman of the Association of Indigenous Peoples in Taimyr, executive secretary of the aforementioned Aborigen Forum, and a leader of Amyaksin, the local Dolgan community organisation. Speaking to GV by telephone, he said, “so far our appeals to Norilsk Nickel and to the authorities have brought no results. That is why we are forced to address to the possible buyers of Norilsk Nickel’s production, so they could help to bring attention to the lack of environmental sustainability of the plants. The oil spill was the last straw for our patience”.

Shchukin explained today’s indigenous communities in the tundra of the Taymyr survive from fishing, hunting and bartering, exchanging fish and meat for sugar, medications, and whatever other products reach them despite vast distances and bad roads. “There is no money in the tundra”, he says. For Dolgans, the deadly pollution of Pyasino and all the linked rivers is not only an environmental disaster but also a financial and a cultural one – families have lost their only source of income and now face either starvation or exile from their homeland at least for the next 50 years, because that is how long it could take for the affected land and waters to be restored.

A letter that Shchukin, as a deputy of a district council, sent to Norilsk Nickel and local authorities after the disaster lists 33 recommendations on how the company could make up for the lost 50 years. Shchukin’s letter, seen by GV, recommends compensating Dolgans for the cost of resettlement and providing professional education for Dolgan youths who now cannot learn their traditional lifestyle.

“In the last decade”, says Shchukin, “there was no significant activity in cleaning of refuse deposits, adding purification plants or filters, and we cannot control any changes. We have no voice on any environmental programme in the region, and even the idea of our representatives being experts on the commission is nonexistent. However, we have no choice but to fight because we simply have nowhere to go. Most of Norilsk Nickel’s workers have roots somewhere else in Russia, so they can say: ‘Let locals deal with it’ – and move elsewhere. But we live here, so we need to take action”.

In their last statement, released on September 15, PORA claims that their research found 700 indigenous people personally affected by the spill and eligible for compensation. When asked about PORA’s fact-finding mission, Shchukin said: “They contacted me not as a representative, but as an individual. However, the expertise they were providing was ethnological, not ecological one. It is also important, but not the same”.

The campaign is also supported by the Sámi people, who live in the Murmansk region where NorNickel operates its western division. As Sámi politician Andrey Danilov told GV, the aim is not to bring NorNickel to their knees but to establish constructive communication on environmental issues and give indigenous representatives a voice in the company’s planned activities, in accordance with the United Nations Declaration on the Rights of Indigenous Peoples. “Honestly, it is a unique situation” says Danilov, “when two different communities of indigenous people from two regions thousands of kilometres apart have joined together in an attempt to provoke and establish a dialogue with the same company — the dialogue they have the right to by international law”.

“It’s a funny thing”, Danilov continues, “as soon as we started the campaign, the local press started talking about how much NorNickel supports the Sámi community. We, on our end, remember only two such projects: a celebration in honour of the International Day of the World’s Indigenous Peoples, and a book in the Sámi language, full of grammar and spelling mistakes”.

Ecological concerns have also been raised in Murmansk region for many years. NorNickel’s products (nickel, copper, and cobalt) are all produced from a type of ore that usually contains a large proportion of sulphur. This means that the extraction process is associated with high concentrations of sulphur dioxide (SO2). The company website acknowledges that for 2019, emissions from all NorNickel plants reached 1,953,000 tons of sulphur dioxide per year – this is approximately five thousand tons per day and an increase on the previous year. When that gas is released in the humid Arctic air, it reacts with water droplets and produces an unstable version of sulphuric acid, leading to acid rain. Consequently, as a recent Novaya Gazeta article about NorNickel put it, the nickel plants are surrounded by a “lunar landscape” which stands in stark contrast to the Arctic tundra. A recent research paper in dendroclimatology showed serious consequences of NorNickel’s pollution for boreal forests, as well as for the climate in general.

Andrey Zolotkov, who heads the environmental organisation Bellona-Murmansk, explained in a phone interview with GV that air pollution has been a thorn in Russian-Norwegian relations since the 1990s. One of NorNickel’s plants is visible from Kirkenes, a Norwegian border town. There’s even a popular environental movement in Norway, established in 1990, called “Stop the Soviet death clouds”. In 2016, the movement tried bringing the issue of NorNickel pollution to the attention of the main nickel buyers: Apple and Tesla. The last international scandal happened in January 2019, when a cloud of sulphur dioxide drifted over the border and forced the Norwegian municipal authorities to trigger a health-warning alarm.

Zolotkov agrees that there has been some progress. In 2016, NorNickel modernised the processing at its plant in Zapolyarny, bringing pollution levels almost to zero. Over the last 18 years, the quality of air in Monchegorsk has reached acceptable range again – except for two separate episodes in the last two years. According to NorNickel’s May 2020 report, the company officially promised to close its melting workshop in Nickel by December 25, 2020. Furthermore, in 2019 NorNickel launched the “Sulphur Project”, a drive for sustainable development which promises an 85 percent reduction of total sulphur dioxide emissions from the company’s Kola division by 2021 and a 90 percent reduction from the Taymyr division by 2025.

Indigenous Sámi people are not yet convinced by these promises. But many international organisations are on the campaigners’ side. On September 7, the Saami Council – an NGO representing indigenous people based in Finland, Norway, Russia, and Sweden – put out a rare statement in support of indigenous peoples of the Russian Arctic and their campaign against NorNickel. Furthermore, the indigenous rights organisation Cultural Survival is gathering signatures for an open letter to be delivered to Tesla’s offices in Palo Alto, California. More than 70 indigenous, clean energy, climate, and mining justice organisations around the world support their plea, which in turn leads to the hope that this campaign could set a precedent.

Meanwhile, on September 26 Vladimir Potanin gave an interview to the Vesti news programme to clear his company’s name. He explained how NorNickel paid for cleaning procedures after the spill. He complained that the record $2.1 billion fine imposed on the company by Rosprirodnadzor, Russia’s environmental watchdog, was too high.