Posted on September 13, 2020 by Viktor Sulyandziga 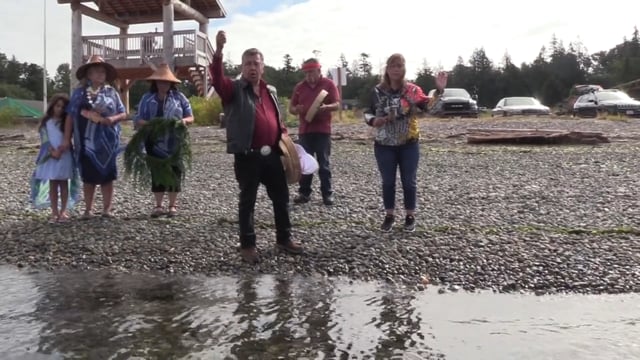 The Lhaqtemish people of Lummi Nation have lived in a reciprocal relationship with Xw’ullemy (the Salish Sea bioregion) since time immemorial. They are people of the sea whose culture, sacred sites, and life ways are tied to their territorial waters, and to the orca whales and salmon who share those waters.

The Lummi term for “orca” is “qwe’lhol’mechen,” which loosely translates into “our relations under the waves.”  Lummi teachings hold orca whales are simply people in whale regalia, and that Lummi people and the resident orcas are bound by ties of intermarriage, society, and spirit. Lummi and qwe’lhol’mechen cultures mirror each other in many ways: we both rely on Chinook salmon; our teachings and rituals are passed down through the generations; and our families are tight.

50 years ago, a young qwe’lhol’mechen was violently taken from her family in the Salish Sea. She was stolen from her mother, from her resident orca relations, and from her Lummi relations. She was captured by men and sold to the Miami Seaquarium. Her captors called her “Tokitae;” the Miami Seaquarium gave her the stage name “Lolita.”  Her Lummi name is Sk’aliCh’elh-tenaut.

She has been held in a tiny concrete tank for 50 years and made to perform daily for her food. For decades, many people and organizations have fought to free her, but have been unsuccessful in their attempts. Now, however, two Lummi women are invoking their unique legal rights as Indigenous people, as well as their cultural, spiritual, and kinship rights, to bring Sk’aliCh’elh-tenaut home to her Salish Sea family. Squil-le-he-le (Raynell Morris) and Tah-Mahs (Ellie Kinley) are backed by the expertise of the Earth Law Center and the Whale Sanctuary Project.

Bringing Sk’aliCh’elh-tenaut home will help heal her, her family, the Lummi people, and the Salish Sea. This act of healing will resonate with other acts of healing throughout the world, wherever Indigenous people are working to save the lands and waters they call home. This is not simply practical or legal work, it is spiritual work.  For this reason, we are holding an international, collective ceremony for Sk’aliCh’elh-tenaut.

← The Federal Security Service (FSB) took control over the creation of the new registry of indigenous peoples of the Russian Arctic, Siberia and the Far East
Russian Indigenous communities are begging Tesla not to get its nickel from this major polluter →