Posted on September 10, 2020 by Viktor Sulyandziga 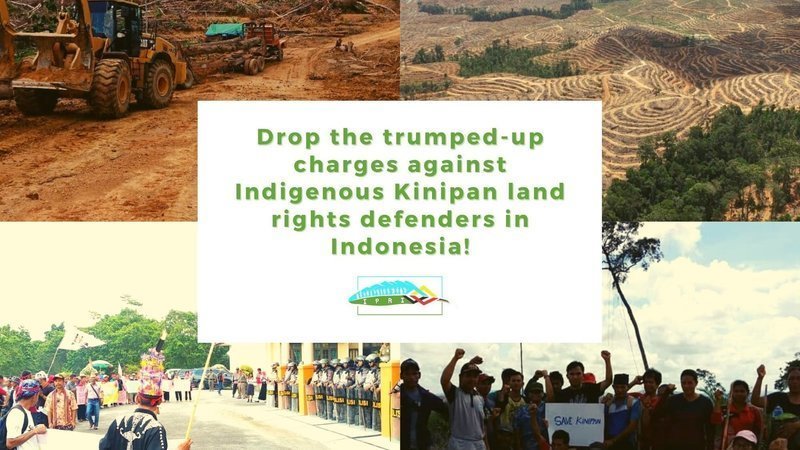 Amid the pandemic, six Indigenous villagers, including Kinipan community leader Effendi Buhing, and two Indigenous youth, were arrested by the Central Kalimantan Police, in Indonesia, for defending their customary forest against the expansion of PT Sawit Mandiri Lestari (PT SML), a palm oil company. Buhing was arrested on August 26, while the other five were arrested on August 15.

All of them were released, but are now facing criminal charges for the alleged theft of chainsaw owned by the palm oil company. This chainsaw was confiscated by the villagers to stop the PT SML from further destroying their customary forest.

Indigenous Peoples Rights International (IPRI) and Aliansi Masyarakat Adat Nusantara – AMAN (National Alliance of Indigenous Peoples of the Archipelago – Indonesia) strongly condemn these recent arrests and criminalization of the Kinipan villagers, which violates their internationally recognized right to their lands, territories, and resources.

The unwarranted act by the police was in retaliation to the protest actions and growing resistance of Kinipan villagers against the forcible eviction from their lands by palm oil company.

According to AMAN, the Laman Kinipan community found out that their forest was being taken over by PT SML in April 2018. Consequently, the community imposed customary sanctions against the company after it destroyed their customary territory, and filed complaints to the Ministry of Environment and Forestry, National Human Rights Institution Komnas HAM, and the Office of the Presidential Staff (KSP).

The complaints of the Laman Kinipan people are yet to be acted upon. However, when PT SML filed unwarranted charges of theft against Indigenous leader Buhing and the other five villagers, the police were quick to make the arrest and file the charges.

The arrest of Kinipan Community Leader Buhing clearly shows the double standards of the police forces. The arrest is used as a tactic to criminalize legitimate dissent so as to push for the illegal operations of PT SML into Laman Kinipan Indigenous Peoples customary lands. This tactic is being used globally to silence Indigenous Peoples in the face of the onslaught against their rights.

Even during Covid-19 pandemic, several Indigenous Peoples communities have become targets of criminalization and violence to give way to the operations of large-scale projects involving agribusiness and extractive industries.

If PT SML will have its way, 190, 000 hectares of forest will be lost; thereby reducing one of the biggest rain forests in Southeast Asia and causing severe damage to climate, biosphere, and ecosystem.

Laman Kinipan Indigenous Peoples have long been protecting their forest and environment from total destruction, yet they constantly face threats and violence, arrests and detentions, and criminalization for defending their lands, forests, and territories.

We call on President Joko Widodo, the Minsitry of Environment and Forestry, Ministry of Agrarian and Spatial Planning, the Indonesian Parliament, and the Indonesian Police:

NOTE: You are not required to donate to this petition.

← The dirty secret behind your ‘green’ electric car
The Federal Security Service (FSB) took control over the creation of the new registry of indigenous peoples of the Russian Arctic, Siberia and the Far East →