‘The Fish Rots From the Head’: How a Salmon Crisis Stoked Russian Protests 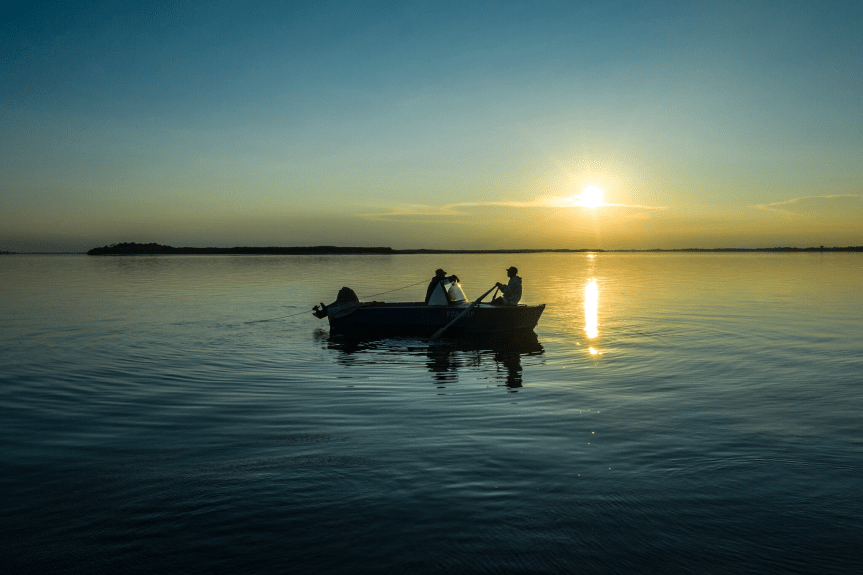 OZERPAKH, Russia — A row of stakes hundreds of feet long pokes out of the endless estuary of the Amur River on Russia’s Pacific coast, resembling the naked spine of a giant fish.

It is a piece of commercial fishing infrastructure reminding the people who still live here that nature’s wealth — in this case, millions of chum and pink salmon — belongs to the well-connected few.

“It’s as though they must exterminate these riches, mercilessly,” says Galina Sladkovskaya, 65, waiting in vain for a fish to bite at a levee about 20 miles upstream. “They only need money and nothing else. They don’t have a human soul.”

Along the Amur, one of Asia’s great waterways, Russians feel cheated, lied to and ignored. The wild salmon fishery that they once took for granted is gone, they say, because Moscow granted large concessions to enterprises that strung enormous nets across the river’s mouth.

People’s anger over their depleted fish stock is so widespread that it has been a driving force behind the anti-Kremlin protests that have been shaking the Far Eastern city of Khabarovsk, on the Amur, since early July.

“This was a gesture of people desperate to be heard,” Daniil Yermilov, a Khabarovsk political consultant, said of the protests. “People wanted to live how they used to live, so that they can catch fish again.”

The story of the Amur’s vanishing salmon also sheds light more broadly on why President Vladimir V. Putin’s popular support has fallen close to the lowest point of his 20-year rule.

Russians’ turn away from Mr. Putin revolves less around abstract concepts of freedom and geopolitics than the concrete instances of poverty and injustice they see in their daily lives — and the feeling that the country’s elite neither knows nor cares about their struggles.

On a dirt road recently near the Amur’s mouth, a green truck splashed by before Leonid, a fisherman, whistled the all-clear. Two boys, his sons, hustled out of their hiding spot in the reeds, dragging a sack of glistening salmon.

“We’re being forced to become poachers,” he said, cursing and refusing to give his last name because he was in the process of breaking the law. “What is Putin thinking?”

Residents say there is virtually no way for them to legally catch enough to eat of what little fish remains, amid ever-tightening regulations on recreational and Indigenous fishing.

The boards tied to the roof of Leonid’s aging blue hatchback were meant to provide an alibi — he was just out collecting wood scraps. His rear windshield carried the slogan of the Khabarovsk region’s summertime political awakening: “I Am/We Are Sergei Furgal.”

Sergei I. Furgal, a former scrap-metal trader, ran for governor of the sprawling Khabarovsk region in 2018 and beat the incumbent, a Kremlin ally, in a rare upset. He gained popularity with populist moves unusual in Russia’s top-down system of governance: He cut his salary, improved school lunches and held frequent listening tours, skipping the tie and posting copiously to Instagram.

By then, the Amur’s fish crisis was already brewing. Federal authorities had granted expansive salmon fishing rights to companies that installed huge, stationary nets in the estuary and at the river’s mouth.

In the fall, the legions of migrating salmon used to make it hundreds of miles upriver to Khabarovsk, filling apartment refrigerators with smoked fish and cheap salmon roe — a New Year’s Eve staple that Russians call red caviar — sold by the kilogram.

He called for new limits on commercial fishing, some of which were implemented, but the salmon have remained scarce. Then, early last month, a SWAT team from Moscow pulled Mr. Furgal out of his black S.U.V. and spirited him onto the eight-hour flight back to the capital.

He was accused of masterminding murders some 15 years ago, but Khabarovsk residents saw a naked Kremlin attempt to remove a maverick governor more loyal to his constituents than to Mr. Putin. Two days later they spilled into the streets in the tens of thousands in the biggest protests Russia’s regions had seen since the fall of the Soviet Union.

The protests, now in their second month, are driven by regional pride, economic frustration and fatigue with Mr. Putin. But their animating emotion, dozens of interviews across the region showed, was a sense of injustice, as encapsulated by the fish crisis: Salmon had been part of life here for generations, and now Moscow had taken it away and offered nothing in return.

“Putin only thinks about war and about his pockets,” said Andrei Peters, 53, a small-business man in the impoverished village of Takhta on the lower Amur. “No one thinks about the people.”

In the struggling fishing village of a few hundred people with no regular internet or road connection to the outside world, someone had printed out black-and-white Furgal posters on regular sheets of paper and affixed them to the wooden electricity poles. With their now ex-governor behind bars, residents said they feared they had lost the one person in power who heard their concerns.

Indeed, the few officials in the region who agreed to interview requests in the wake of Mr. Furgal’s arrest either dismissed their constituents’ fish-related anger or redirected the blame away from the Kremlin. In the Indigenous community of Sikachi-Alyan, an hour’s drive outside Khabarovsk, the village head, Nina Druzhinina, explained that “America is at fault for all of our sins.”

“The C.I.A. has inserted its services everywhere, and its spy network is probably highly developed,” Ms. Druzhinina said. Commercial fishermen were able to exploit the Amur River, she said, because of post-Soviet Russia’s American-inspired legal code.

In the regional parliament, the speaker, Irina Zikunova, said that many Khabarovsk residents “are guided by impulse, are guided by emotions, are guided by feelings” rather than by facts. She rejected the notion — heard virtually universally in interviews with residents along the Amur — that officials in Moscow had shaped fishing regulations to the benefit of well-connected businesspeople.

“In reality, this is a made-up problem,” she said.

One of the Amur’s main fishing magnates, Aleksandr Pozdnyakov, is chauffeured around Khabarovsk in a black Mercedes Maybach. He acknowledged in an interview in his tastefully dark-toned office that the Amur fishery is in crisis. But he said the problem was overfishing by local residents who preferred to “pay nothing and do nothing while catching as much as they want.”

Mr. Furgal, the Khabarovsk governor arrested last month, made things worse, he said, speaking “as though he’s doing everything for the people” and telling the public they had a right to the salmon in the Amur.

“I’ll tell you one thing,” Mr. Pozdnyakov said of the tens of thousands protesting in support of Mr. Furgal, “I am confident that practically 99 percent of those going out are slackers who don’t want to do anything.”

Experts say there is truth to the notion that poaching by local residents is part of the problem. Olga Cheblukova, who coordinates the World Wildlife Fund’s Amur River studies, said the environmental group’s researchers have seen hundreds of dead salmon scattered near their spawning grounds, their bellies sliced open and their roe removed.

The fundamental issue, she said, is poor federal oversight that failed to detect a natural decline in the wild salmon population after the large catch in 2016. In the years that followed, regulators granted fishing quotas exceeding the actual migrating population, allowing runs of salmon to be virtually exterminated before they managed to reproduce.

In the fall of 2018, W.W.F. researchers counted an average of about 0.1 chum salmon per 1,000 square feet of river at their spawning grounds, compared to a norm of about 50.

To Khabarovsk residents, that failure of governance means more expensive fish — a parable for all of Russia, where official mismanagement and corruption often translates to bad roads, crumbling hospitals and polluted wilderness.

The protests in Khabarovsk show how easily public anger over those failures can now boil over — as it did for Evgeny Kamyshev, 32, a protester who blamed the Kremlin for the scarcity of salmon.

“The fish rots from the head,” he said.

← Denis Sangi. Degradation of federal law “On guarantees of the rights of the indigenous peoples of the Russian Federation”
In the Cheremza tent camp of indigenous activists in the Kemerovo region, police have started to detain protesters →